Melissa Haizlip: Winner of this year's Chaz and Roger Ebert $25,000 Fellowship at the Indie Spirits Awards 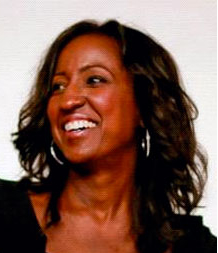 Melissa Haizlip was born in Boston and raised in the Virgin Islands, Connecticut and New York. After attending Yale, she moved to New York where she first collaborated with her uncle Ellis Haizlip when he produced the groundbreaking PBS special "Three by Three" for Great Performances: Dance In America (PBS).

After studying at Yale, and a 25-year career as a professional Broadway stage performer and TV / film actor, Melissa moved to Los Angeles to work in Development at the American Film Institute. She soon began casting for independent features, including "40," a multi-storyline, international thriller set in Turkey and Africa. After winning the Golden Orange Award for best new talent at the Antalya International Film Festival in Turkey 2009, "40" premiered at the Toronto International Film Festival 2010, screened at Osaka 2010, and received special jury mention at Palm Springs 2011.

In 2009, Melissa founded Shoes In The Bed Productions, an independent film production company producing cinematic works of non-fiction with an emphasis on diverse new voices and filmmakers of color. The company's first feature-length documentary, Mr. SOUL! was featured during IFP's Independent Film Week 2010, Spotlight on Documentaries Forum, and is a participant in the 2011 Producers Guild of America Diversity Workshop. Mr. SOUL! screened at the Congressional Black Caucus Foundation's 41st Annual Independent Film Series in 2011. This project is supported in part by the National Endowment for the Arts, which awarded a Spring 2012 Arts in Media grant to support producyion and post production costs of Mr. SOUL! Melissa is a Project: Involve Fellow in Film Independent's Class of 2012-2013.

And here is a link to the Website for Melissa's film.

And a link to my review of a previous winner.