This is a good time to be “a Marxist of the Groucho tendency,” as Jean-Luc Godard is credited to have quipped (it probably sounded much wittier in French). Universal Studios has restored the Marx Brothers’ five essential Paramount comedies ("The Cocoanuts," "Animal Crackers," "Monkey Business," "Horse Feathers," and "Duck Soup"), currently being screened in select cities in advance of their home video release. The past year alone has seen the publication of new and illuminating Marx analysis, arcana and minutiae, including Lee Siegel’s “Groucho Marx: The Comedy of Existence” and “The Annotated Marx Brothers: A Filmgoer’s Guide to In-Jokes, Obscure References and Sly Details” and “That’s Me, Groucho: The Solo Career of Groucho Marx,” both by Matthew Coniam. Robert Bader’s “Four of the Three Musketeers: The Marx Brothers Onstage” comes out in October.

But Noah Diamond’s book, “Gimme a Thrill,” is a particularly heroic piece of Marx scholarship. The subtitle says it all: “The Story of ‘I’ll Say She Is': The Lost Marx Brothers Musical and How It Was Found.” It is both a detective story and one of the great “let’s put on a show” show business sagas

“I’ll Say She Is,” which debuted in 1924, is one of three Marx Brothers holy grails for fans. The first is "Humor Risk," the Marx Brothers’ first foray into film, a 1921 silent that one and all deemed unreleasable and is presumed lost. The second is a pristine and unexpurgated print of "Horse Feathers" (this, sadly, eluded Universal’s restoration team). But through seven years of painstaking research, the cooperation of surviving family members of the original creators, and the kindness of kindred-spirited strangers, Diamond was able to reconstruct  “I’ll Say She Is,” which had not been performed in almost a century.

That changed in 2014 when Diamond, starring as Groucho (thus becoming only the second actor ever to star in the role in this revue) mounted sold-out and well-received “re-premieres” of “I’ll Say She Is,” first at Marxfest in New York City, and then at the New York International Fringe Festival. 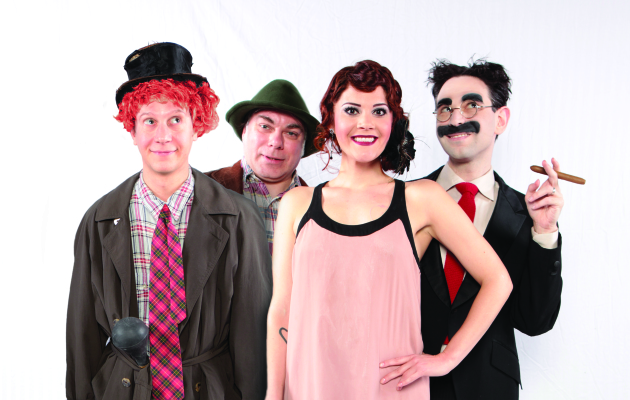 Today, the graphic designer by day and Groucho by night, is starring in a full-fledged off-Broadway production of “I’ll Say She Is” at the Connelly Theatre. It runs through July 2. This newest incarnation is directed by Amanda Sisk, Diamond’s wife, with whom he has collaborated on a series of political shows under the banner Nero Fiddled.

“I’ll Say She Is” made the vaudeville-headlining Marx Brothers full-fledged Broadway stars and darlings of New York’s smart set (literally; Harpo, in particular, was taken under the wing of influential New Yorker critic Alexander Wollcott and introduced to the wits of the Algonquin Round Table). Its most lasting legacy is a sketch featuring Groucho as Napoleon bidding farewell to Josephine, who is being romanced under his nose by Chico, Harpo and Zeppo. Another is a talent agency sketch in which the brothers take turns trying to impress a talent agent with their (horrible) impersonations of a star of the day (Al Jolsen in Diamond’s “I’ll Say She Is.” This sketch was later recreated on film to promote Monkey Business with the team impersonating Maurice Chevalier and was also restaged in that film).

But the rest of the revue’s songs and sketches were scattered to the winds.

Diamond’s quest to rescue “I’ll Say She Is” from obscurity was “a very gradual a-ha moment,” he said in a phone interview from his dressing room at the Connelly. “I started saying “Ahhhh” and then about six months later, I went, ‘Ha.’”

Diamond, 39, missed the late ‘60s and early 1970s Marx Brothers revival and the heyday of repertory movie theatres that screened their films in the era before home video and cable. As a boy, he discovered the Marx Brothers in books. His parents owned a copy of Joe Adamson’s seminal, “Groucho, Harpo, Chico and Sometimes Zeppo.” “Just the faces and the pictures (from their films) were enough to get me interested in these guys,” he said.

The more he read about the team, the more “interested and haunted” he became by "I’ll Say She Is." It’s the first thing he would check in the index of any new book on the Marx Bros. The team’s Broadway period, he said, “hits my sweet spot. I’m a theatre kid, and I love New York and the culture of the 1920s. The fact that the Marx Brothers were musical theatre figures doesn’t get commented on a lot.”

Unlike "The Cocoanuts" and "Animal Crackers," which originated on Broadway, "I’ll Say She Is" was missing in action. “I’m attracted to what is just out of reach,” Diamond said. “I started to seriously research it in 2009. I kept finding little fragments of the show’s content; a joke quoted in a column, a couple of songs that hadn’t been heard in almost a century but existed as sheet music. It just gradually became clear that maybe this thing could be put back together.”

The template was a 30-page treatment-type rehearsal script written by Will B. Johnstone, who later co-wrote "Monkey Business" and "Horse Feathers." Vexing to Diamond were “very obscure notes,” he said. “In parentheses at one point, it said, ‘business with hats.’ But it provided a clothesline I could hang other fragments on.”

From Groucho’s scrapbooks housed in the Smithsonian, Diamond unearthed this bit of quintessential Marx Brothers wordplay:

Groucho: Who was that lady I saw you with last night?

Chico: That wasn’t last night; it was the night before last night.

From Chicagoan Ira Dolnick, with whom Diamond connected on the Internet a decade ago, he received sheet music for five songs from the show. Will B. Johnstone’s great-granddaughter, Margaret Farrell, a musicologist, helped with the adaptation.

It is a heady experience embodying your comedy idol. Onstage, he finds he is finding more “in the moment” opportunities to ad-lib, an homage to the spontaneity of a Marx Brothers performance. Offstage, he said, he must make concerted efforts to not let his Groucho flag fly. “I’m a compulsive word player,” he said. “It’s hard to leave language on the table, especially if someone drops an unusual phrase or says something that has a conceivable double-meaning. My wife can see the gears turning and will pre-emptively warn, ‘Don’t say it.’”

Beyond getting laughs as Groucho and the ineffable joys of watching a close-knit ensemble come together to bring “I’ll Say She Is” back to life, Diamond reflects that the most profound moments associated with the show occur while waiting in the wings.

“It’s very dimly lit, very film noir,” he said. “I catch my shadow on the wall (in full Groucho costume) and I realize that this is what he saw when he was waiting to go on. I’m very ambitious as a writer, but as a performer, I would be very happy never to get out of that shadow.”