Lenses and Reflections: "I Origins" and the history of the eye closeup

The first thing you see in “I Origins,” the new science fiction film directed by Mike Cahill and starring Michael Pitt, is a close-up of eyes with sectoral heterochromia. The term refers to a beautiful pattern in the iris where a small part of it is a different color than the rest. The eyes belong to Astrid Bergès-Frisbey, and they are so important to the film that the camera lingers on a shot of them. Eyes and eye patterns drive the story, one that veers between scientific possibility and new-age ideas, so Cahill wanted to control the sectoral heterochromia as best he could. “I look at my old computer,” he explained to me, “where I have all these old versions of me trying to design an eye, and they’re all so bad.” Cahill realized that no special effect, no matter how complex, can replace a stunning example of the real thing. Whether it’s in film or a possibility between two lovers, the eyes are beguiling because they’re a recorder as well as a subject, a lens as well as a surface. “I Origins” is the latest example of cinema’s longtime obsessions with the eye close-up, and a reminder that the eye is not the window into the soul, exactly. Eyes are the canvas on which filmmakers apply their evocative, imprecise vision. 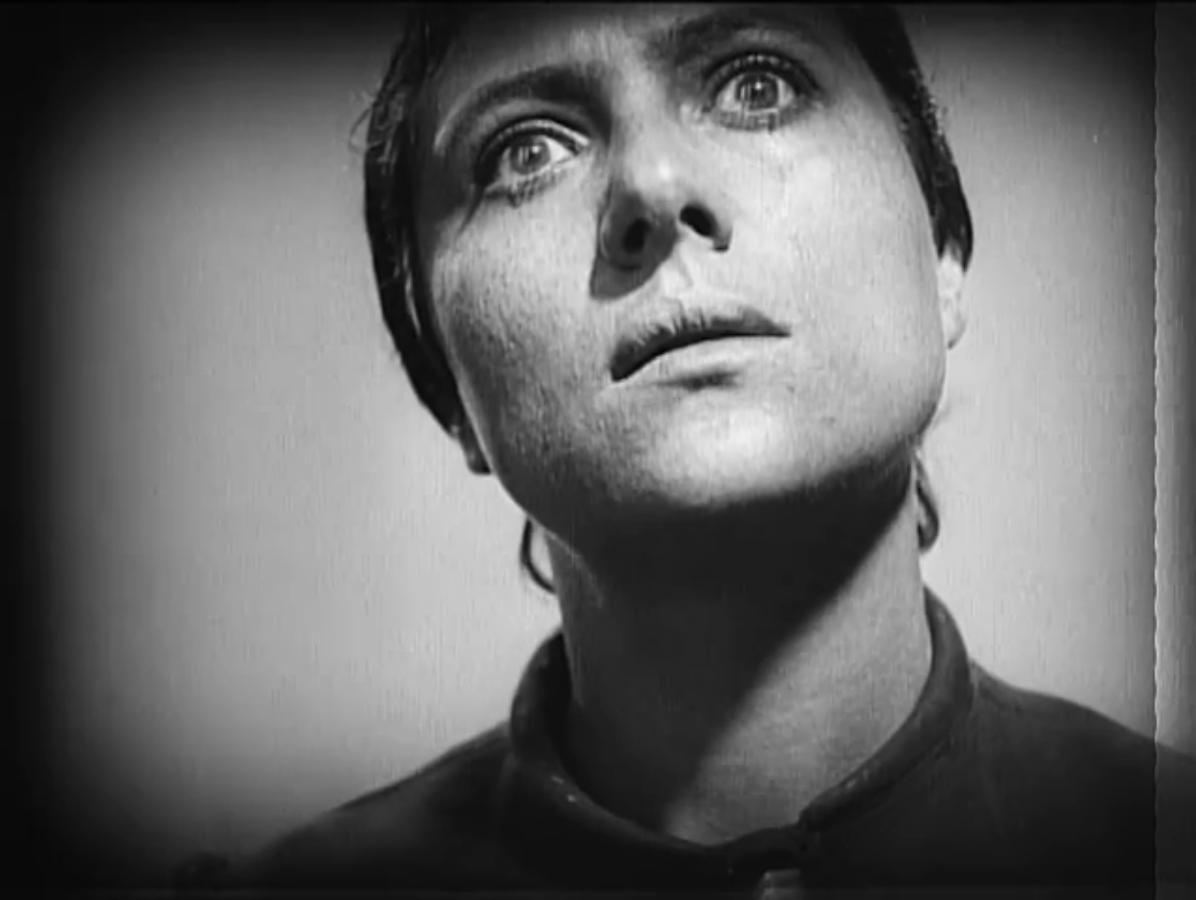 The two earliest, most memorable sets of eyes are striking, albeit for different reasons. The Danish silent filmmaker Carl Theodor Dreyer avoided lavish exteriors in his masterpiece “The Passion of Joan of Arc,” and instead his camera regarded his star Renée Jeanne Falconetti in a series of anguished close-ups. Her eyes are focused and fearful, allowing the audience to see the humanity and injustice of Joan’s sacrifice. Critics and scholars widely regard Falconetti’s performance is one of the finest in all of film, yet it’s Dreyer’s steadfast gaze that creates the opportunity for her heartbreaking expressions. His masterstroke is one of patient focus; he realized that an expressive faces and eyes, not physical suffering, are a powerful way to connect with viewers. Released one year later, the surrealist short film “Un Chien Andalou,” co-directed by Luis Buñuel and artist Salvador Dalí, takes this understanding and uses it as a shocking joke at its audience. After a shot of a thin cloud cutting through the moonlight, there is a jarring, parallel shot where a man slices open a women’s eye with a razor (it really belonged to a dead pig). Just as Dreyer created a rapport with his subject/audience, Buñuel and Dalí obliterated the relationship through profound discomfort. No matter their intent, these filmmakers internalized the eye obsession and what feelings it may provoke. 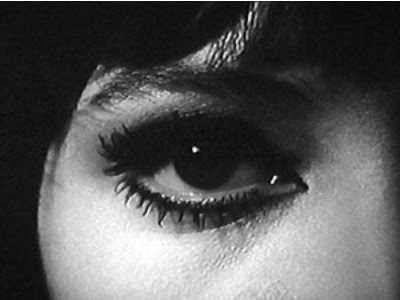 Since the silent era, there have been dozens of captivating eye close-ups, and these shots have captured virtually every tone and mood. In Jean-Luc Godard’s “Alphaville,” there are series of close-ups on actress Anna Karina’s eyes that are mournful and seductive. The eyelashes deepen the beauty, while Godard’s farming give just enough facial context so that close-ups are not unnerving. While Godard saw an eye filled with passion, Alfred Hitchcock saw the potential of an inanimate eye with “Psycho.” After Janet Leigh’s infamous shower scene, the camera steels itself on her iris then zooms outward, a visual reminder how death begins in the eye then expands outward. One of Mike Cahill’s favorite eye close-ups is in Krzysztof Kieślowski “The Double Life of Véronique”: “It’s super-super close, and you see a reflection in the eye of someone walking to the doorway. [Kieślowski] uses a [macro lens], he’s playing with the reflection so that eye’s purpose is twofold.” In fact, “I Origins” has several moments where a distant object’s reflection is in the iris; this shot is one of the most popular in film, within one genre in particular.

From “2001: A Space Odyssey,” onward to “Blade Runner” and “Looper,” science fiction filmmakers use an eye close-up to engage with the viewer’s sense of awe and chaos. The purpose of the close-up often depends on whether the viewer sees one eye or both. A single eye can be disorienting, both in terms of the character’s fear or the sheer enormity of what they’re seeing (filled with reflecting light, the eye close-up in “Blade Runner” is one of the more rapturous examples).

This extreme close-up can also reflect the frenzied reality of its subject: in “Fear and Loathing in Las Vegas, hallucinogenic bats fly out of Raoul Duke’s eyes, a perfect metaphor for how his poisoned brain influences his outward perception. A close-up of both eyes, on the other hand, is more alluring and seductive. Filmmakers have their actors look into the camera, and therefore at us. In addition to filmmaking craft, a close-up on eye pairs are an opportunity for an actor to evoke big emotion through minute movement, whether it’s a wink, blink, or a single tear. Michael Pitt, who was there for the interview alongside Cahill, was quick to note how acting works for such scenes: “With [Cahill] uses a macro lens while shooting me, [my work] is a lot more about not moving.”

Matthieu Langlois, a talented 21 year-old videographer and animator who lives in Sudbury, Ontario, fully understands the power and ubiquity of the eye close-up. While he was a student, Langlois would upload a series of supercuts on his Vimeo channel under the pseudonym Roman Holiday, and his series of eye close-ups were his most evocative. In an interview, he explained his initial inspiration:

"Close ups of eyes in film are just striking images. They can be used for all kinds of purposes, too. Want to highlight a characters telepathic powers? Eye close-up. Want to disorient your audience right of the bat? Open to a close up of an eye looking around frantically. It`s a really versatile tool… [One] clip that really struck me was the eye close-up from “The Magdalene Sisters”... There's a lot going on in it with the blood framing the brow and the woman's reflection in the pupil as she's talking to the owner of the eye. It's a surprisingly long shot as well."

His videos about single eyes and eye-pairs draw from many facets of film history, with a notable focus on recent horror and science fiction. The way Langlois rattles off different purposes for the close-up suggest that filmmakers might rely on the shot too much, as if early innovators lead the way for uninspired copy-cats. The shot is an easy one to duplicate, particularly since high-end cameras and lenses are less expensive, yet only the best filmmakers can shoot deep into an iris and find something spiritual. 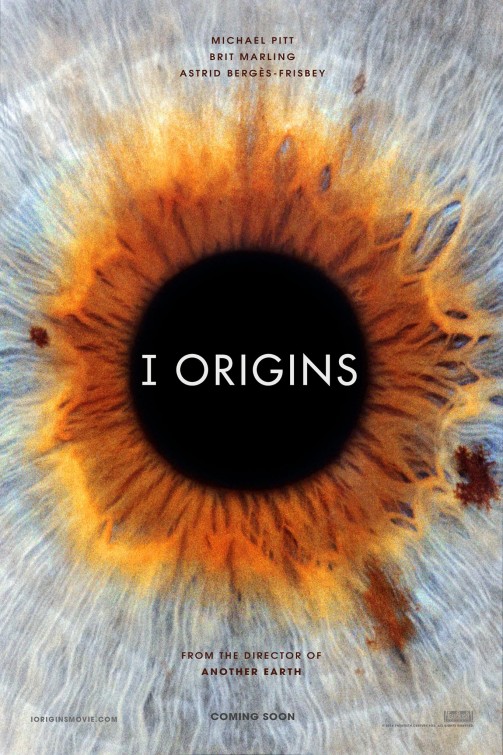 The spiritual quality of the eye brings us back to “I Origins,” and how it wrings the iris of all its scientific and irreducible qualities. The film centers on Dr. Ian Grey (Michael Pitt), a molecular biologist who stumbles onto a hypothesis with staggering implications: what if eye patterns are a blueprint for something beyond scientific understanding? What does it mean if newborn has the same eye pattern as someone who is recently deceased? Cahill draws from real science, including India’s iris database project, and genuinely thinks that the iris holds a potential key about humanity. He says, “Eyes are our [version] of the dinosaur footprint… We have these mythologies about the eye now, but maybe in the future there’ll be a new understanding about [eyes] that’s beyond our current comprehension.”In the middle of the interview, Pitt picks up his smartphone and calls Astrid Bergès-Frisbey, whose eye is on the poster of “I Origins,” and asks me whether I have a question for her. I ask her how she felt when she saw the poster for the first time, and she said, “It made me feel shy. It meant everyone would look into my soul, all day long.” Her genuine reaction is a riff on the same cliché, yet it is important to remember that the every cliché begins with a kernel of truth. Cahill and the filmmakers before him are right in their understanding that there’s an ethereal, fleeting power in the eye. This power is not the soul, probably, yet our reliance on the word show how something common can somehow be beyond or our vocabulary, and our scope. Filmmakers need not be burdened by loaded terms like “soul,” and instead benefit from how they are a placeholder for imagery (I hope) we may never understand fully.