Writer/director/cinematographer Jeremy Saulnier is riding a wave of acclaim for his brilliant thriller "Blue Ruin," a film that has played dozens of festivals from Cannes to Sundance, is now playing in limited release, and is currently available On Demand. Disclosure: I think it’s one of the best films of the year, a great revenge story that has drawn deserved comparisons to the Coens’ "Blood Simple." Saulnier sat down with almost a year after it premiered at Cannes to discuss the reception the film has received, his cinematic instincts, and the confidence it takes to value visual storytelling over style in filmmaking today. And "Revenge of the Nerds."

Have you blown away by the positivity of the responses? What are you at now? 95% on Rotten Tomatoes?

It’s funny because I’ll never breakthrough in New York. The local press in New York—there’s a concentration of mixed-negative reviews that just broke my heart. Although Washington Post came out today. (Smiles). Ann Hornaday gave it a 4-star review. By and large, despite every negative tweet breaking my heart, I’m fully aware that we are VERY fortunate. The praise is alien to [star] Macon [Blair] and myself.

You know that experienced filmmakers would say don’t focus on the reviews, especially the negative ones.

I read everything NOW. There’s things I dismiss. What’s cool is that prior to this experience I always agreed with the bad stuff. I only saw the flaws. Because this film has had such a long build-up and was such an act of desperation—Macon and I put everything we had on the line artistically and financially—coupled with the fact that we were definitely not expecting to get into Cannes for the Director’s Fortnight [in 2013] and so there was no time to overthink things. We went from a 25-year push to having to crank it out and finish it in 3.5 weeks. So, we were just so shocked when we saw it at the premiere that it was even a movie. I didn’t have time to regret anything. I was just so elated that it was a finished movie that didn’t suck.

Is this movie exactly the same as the Cannes version?

Yes, picture-wise. New sound mix. We did a sound mix in 3.5 days. We were standing up, calling audibles. Again, Macon and I were just shocked. We didn’t have time to register what we did.

And then you had a LOT of time. We’re talking about a year ago at Cannes. What’s that like? You have to rush to completion and then kind of tread water for a while.

As soon as we premiered, we sold it. And there was so little for sale at the Cannes market, there was a feeding frenzy. We sold 20 territories in one week. We had 20 or more entities that were planning on releasing it and so I started doing publicity a year ago on the festival circuit. We went right from there to Deauville to Toronto to Chicago to Melbourne. The total tally was maybe 30 or 40. It’s been juggling. It’s not slowed down at all since the premiere.

Are you a little tired of it?

Macon and I are exhausted. Trying so hard to keep up with the people who write kind notes via email or Facebook. We’re still in the "civilian world" of Facebook. Anyone can go online and just find me. We’re trying to keep up and balance it with our home lives. It’s very hard to balance and we’re totally exhausted, but we’re also fully aware that this is a very special ride for us that will never happen again. We can never come out of nowhere again. 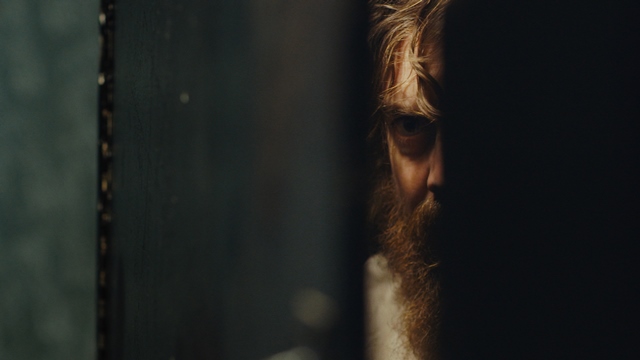 Isn’t there a creative impulse to want to move on to and start talking about something else?

For me, my impulse is to retreat and take a breath and not make a movie for a long time. But I’ve had to fight against that impulse. Two for two movies I’ve made are self-funded and with very high risk and only did "Blue Ruin" end up in reward. I love to tell stories and that’s what I want to do but I don’t want to be too precious. That’s my problem. I’m too precious. I have been writing a new screenplay. I finished one about a month ago. I was writing it on the road. I feel like I want to make it and I don’t want to over-think it. Not that I want to do this sloppily or without really making sure I’ve vetted this project and that it represents me as an artist. When I think about movies, I don’t like films that are over-designed and so tight that they become jigsaw puzzles. I like the experience. I have this idea, I wrote it, and I just want to make it.

That’s true of "Blue Ruin"? It’s a film that feels very precise and calculated in its filmmaking decisions. How much do you plan out ahead in terms of storyboarding and precise decisions, especially given that you shoot your own films?

It IS precise as it’s conceived. I see things visually first and I try to write down what I see. The more I over-think it, the less of that hard-to-peg-down, charged level of intuition is still there. I think about things a lot and talk about them a lot. Once I write them, the blueprint is there and I’ll tweak dialogue and do structural changes but if you over-work something you’ll lose that initial impulse that you had. It gets diluted. I like doing things that I can’t totally explain. Writing with intuition on a gut level seems more true and more experiential. When I start overthinking things…

You’re talking more about going with your instincts and not rewriting to death.

Yes. I’m not a cerebral filmmaker. I don’t like intellect taking over when I make movies. To me, that’s not how I respond to cinema. I like the gut level. Visceral.

But their cinematic language is very intuitive. They’re razor-sharp with their dialogue but when they shoot films the camera can’t move an inch. They put it in the right place for every fucking shot. That’s what I’m talking about. That’s what I see when I write: Shot placement and visuals. I always like to have a worthy exchange in the dialogue scenes and those in "Blue Ruin" are very calculated. They have to have a narrative impact and some kind of conflict. 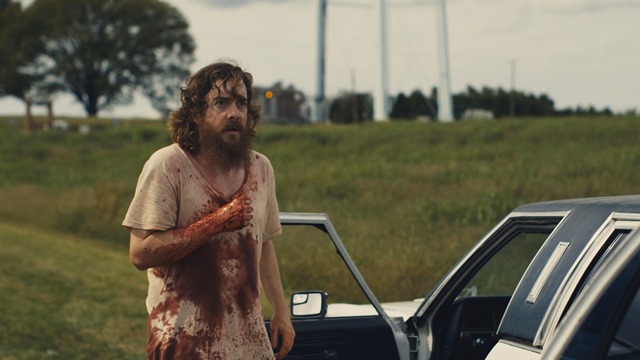 Your compositions to me seem so, I guess precise isn’t the right word, but there’s a confidence in the visual storytelling in "Blue Ruin" that’s too rare nowadays. As someone who sees hundreds of movies a year, I’m so tired of films in which every character explains what they’re doing and why they’re doing it with every line of dialogue. The fact that your film basically opens with ten minutes of almost nothing but pure visual storytelling…

If you discount the officer scene, it’s almost 17 or 18 minutes.

Talk about the importance of image over expository dialogue, especially when you craft a protagonist who barely speaks.

It’s everything in this film. It was very much designed to be a relief from these contained, dialogue-driven films. I just don’t respond to that much exposition. I don’t respond to "people in a room." I grew up on films that were more visually crafted. Back then, to become a director, you had to know your lenses. You had to know so much about the technical craft of filmmaking. Even "Revenge of the Nerds" is a crafted movie. The script is tight. People are like "It’s a comedy!" John Landis comedies are brilliantly shot. With this new glut of films because of the accessibility of filmmaking, it certainly did, for a short while, result in a diminished aesthetic across the board. People who didn’t know how to operate cameras were making movies that were getting into top film festivals. That is, in some ways, really exciting, but if you’ve seen a hundred of those it gets less exciting. As a personal directive, I wanted to make a visually crafted story that could showcase the fact that you could still tell an effective narrative and have as much thrust behind it as a dialogue-driven film using camera placement and moving it so you were taking the audience through a story visually. It is how you tell cinematic stories in my eyes. The dialogue was a cathartic exercise in that the characters can talk amongst themselves but only amongst themselves. They don’t talk to the audience. It’s not for their benefit. That’s why people have responded to "Blue Ruin." I am an audience member first. I make films to watch in a darkened theater, not to showcase my abilities or shove a political view. I just want to be in a dark room and watch a movie. Make it as compelling as possible, respect the audience, and let them fill in the gaps.

It takes confidence in yourself and the audience.

Exactly. Confident in myself and trust in the audience. The best comedies that I watch feel like they’re talking just to me. "Only I get that." It’s this weird thing. It’s a connectivity that I love. When people can make these leaps and fill in the gaps, there’s more weight. It feels like they’re participating and it’s really cool. 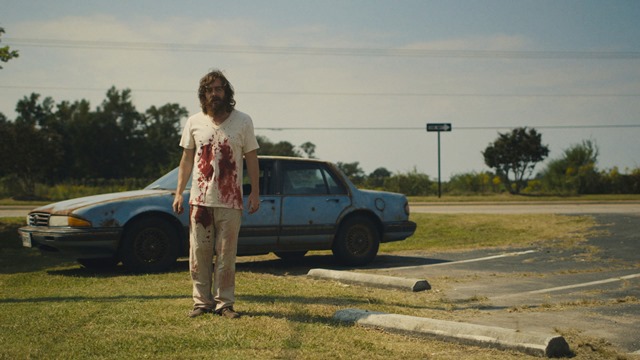 You talk about filling in gaps. How much of the back story do you and Macon fill in? Do you know where Dwight has been for 20 years?

Everything. I have so much detailed history with a timeline for both the Cleelands and Dwight and Sam. That is the key. I’m not trying to be enigmatic just to be a mysterious filmmaker but by having a detailed timeline and history, then it’s much easier to write their dialogue and insinuate certain things strategically so that the audience will get the undercurrent of all of this and keep it true. It’s much easier to stay and that world and grounded. There ARE some choices that I’ll make are "just because". And, when I was making this, sometimes random, instinctual things will happen and be fun because I don’t know where I’m going after that. "I have to do this. It will be fun to write myself into this corner."

That takes confidence. Again. In that respect, let’s talk about the precision of the camerawork one more time. A lot of young filmmakers think that to create tension they need to over-use their camera whether it’s with Greengrass shaky-cam or quick cuts. You have a very still, almost calm sense of composition in this film. How does stillness and quiet increase tension as much as the more obvious thriller choices?

It’s a study in contrast. It’s intuitive and practical. I’ll shoot scenes handheld sometimes because it’s the only way I can do it. The bathroom scene—it just seems right. I’ve had so many people "sell" me ideas. If you can shoot something in widescreen because it’s a Western with big vistas or because it’s an ensemble piece in a house so you can see multiple characters. They’re polar opposites. I shoot widescreen because it looks neato. It’s how my cinematic eye sees things. That’s how I want to do it because widescreen is cool. I see pictures first. It’s so important to develop a rhythm and a pace. We did go handheld in a few scenes but it’s very decisive. It’s never style first. The style of this movie took a back seat: Always narrative, always character, and always the story first.