Hannibal Lecter, Norman Bates, and Those Who Kill

Three new or returning shows that center on horrific, violent people or those obsessed with them premiere or return in the next week and prove that these thematic commonalities do not make them equal. One stands head and shoulders above not just its genre peers but every other drama on network TV, another has moments of brilliance caught up in clunky plotting, and a third simply misses its mark, in no small part because it brings nothing to a new form of television that others are simply executing more impressively. And if grisly behavior is not your thing, we have an alternative in the form of a clever new Comedy Central offering. 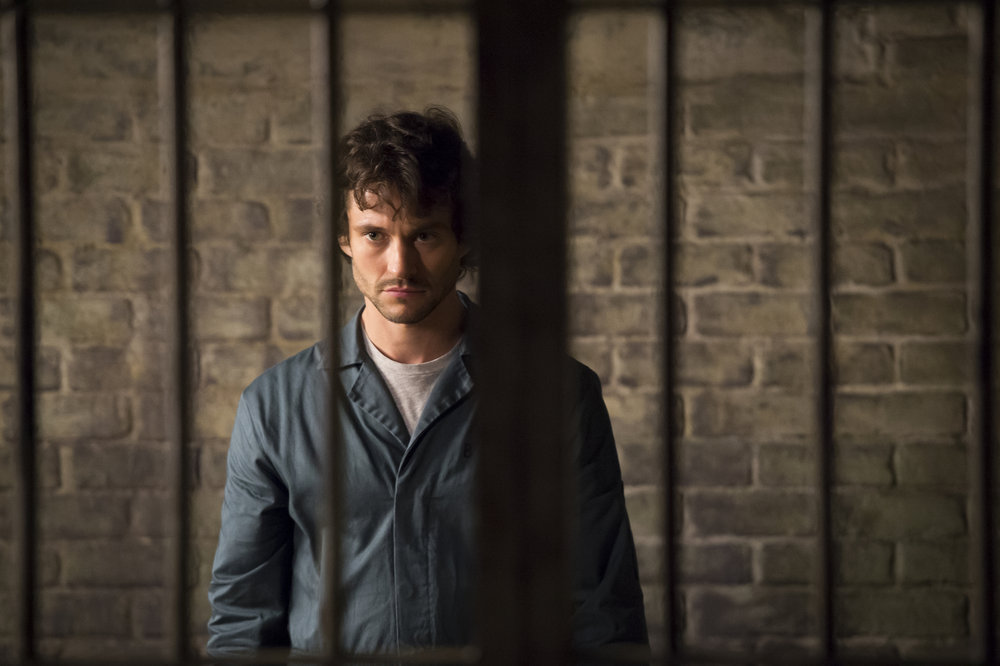 With the first two episodes of season two of Bryan Fuller's brilliant reimagining of Thomas Harris' "Hannibal," returning this Friday, 2/28 to NBC, the creators of what I considered to be the best network drama of 2013 set the stage to possibly top their first remarkable season. "Kaiseki" kicks off with an adrenalin-pumping, brutal fight between Hannibal Lecter (Mads Mikkelsen) and Jack Crawford (Laurence Fishburne). Even the staging of this fight sequence, which it's revealed takes place weeks after the rest of the episode, feels cinematic in nature. The editing, the choreography of the fight, the intensity of the physicality of the actors—this is the kind of HBO- or Showtime-caliber filmmaking that is usually discarded by the world of television producers in favor of something simpler to execute. And that attention to detail—reflected in the show's color palette, drum-tight editing, and thematic interplay within its scripts—consistently elevates this reimagining of one of the most legendary horror characters of all time.

At the end of season one, Hannibal had succeeded in framing Dr. Will Graham (Hugh Dancy) for murder, convincing his superiors and even Graham himself, at least to start, that he was a killer. Consequently, Will now resides in the position most often held by Hannibal in the canon of this series—the imprisoned maniac. At the same time, Hannibal is now assisting the FBI in an investigation that begins after a group of overly preserved bodies are found in a creek. And so our two central characters have switched roles. Fuller and his team brilliantly play with the visual language of this series, placing Will in cells of the Baltimore mental institution in which he's held that visual callback to "Manhunter" and "The Silence of the Lambs". And as Will offers advice on finding a serial killer that is distinctly similar to that offered by Hannibal to Clarice Starling, the roles that distinguish killer and captor blur even further.

"Hannibal" is thematically brilliant and dense in ways that most network television is not, but it wouldn't remotely work without its committed, incredibly talented cast. Dancy and Mikkelson continue to redefine these characters to the point that they're making them their own while Fishburne, Caroline Dhavernas, and another great guest turn by Gillian Anderson elevate the overall ensemble. If one discounts HBO's amazing "True Detective" as a mini-series, this is the best drama on TV, network or cable. 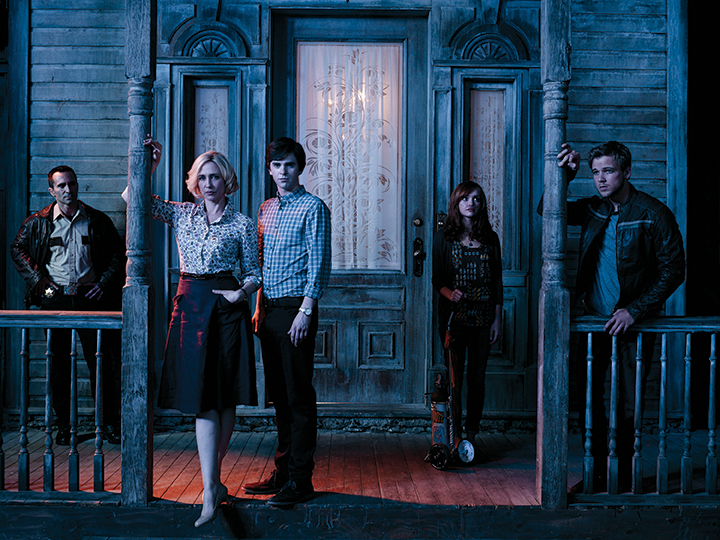 Of course, Hannibal Lecter has a partner in crime when it comes to reimagined characters for the 2014 TV landscape. A&E's "Bates Motel" returns for a highly-anticipate second season on Monday, 3/3 and the premiere feels like more of the same: Another scene-stealing turn from Vera Farmiga, strong production values, and some tongue-in-cheek fun, but nowhere near the thematic depth of a show like "Hannibal." To be fair, they have very different dramatic goals, but it's impossible not to compare even subconsciously when one program has taken the opportunity to really redefine a landmark character and the other seems to still be finding its voice.

The first season of "Bates Motel" ended with Norman's (Freddie Highmore) teacher dead on her bedroom floor after giving the addled young man a ride home. Did Norman do it? Even he doesn't remember the next morning, blacking out as the poor young Bates often does. Norman becomes obsessed with the death of his teacher, perhaps knowing that he was involved in some way but the writers leave it open to drive the plot for at least the first few episodes. Surprisingly, they partner the Norman arc with a new one for Bradley (Nicola Peltz), a character who never really resonated in season one. She's gone to a pretty dark place after a suicide attempt in the premiere and Norman is still obsessed with his first love in possibly unhealthy ways. At the same time, Norma fights the construction that threatens to destroy her livelihood.

I like the fun touches that often pop up in "Bates Motel," such as opening the season with a bouncy, dyed-blonde Norma hopping down the steps like Doris Day to the pop hooks of Haim's "The Wire." This is pretty far from the original "Psycho" and I like it when a show like this gets darkly humorous with its own legacy. Many of Norma's freak-outs have a black streak of over-the-top humor, and it's in those moments that Farmiga and the show shine. The dramatic material, especially that involving the young cast, still feels slight and unengaging to me. "Bates Motel" has always been, for a season and an episode now, a show that teeters just on the edge of brilliance but doesn't quite take the plunge.

Pairing "Bates Motel" with another dark drama must have seemed like a no-brainer and so A&E premieres the far-more-intense "Those Who Kill," starring Chloe Sevigny and James D'Arcy after the return of Norma and Norman Bates. Closer to an atmospheric horror show like "The Killing," the pilot of "Those Who Kill" features the kind of cinematic production values that we've come to expect from cable and the two leads are undeniably engaging, but the writing here is paper-thin, the kind of scripted crime drama that we've seen too many times for it to feel fresh again. Sevigny plays a homicide detective named Chloe Jensen who works with a forensic psychologist named Thomas Schaeffer (D'Arcy) to track the bad guys. She also brings baggage of evil and violence from her own past and he seems to be on the trajectory of crazy that Will Graham occupied a few years before he met Hannibal Lecter. I have admired Sevigny in the past (she was brilliant on "Big Love") but she feels miscast here. I don't think it's her fault as much as it is a lack of interesting characterization or writing that separates "Those Who Kill" from the bizarrely-crowded pack of shows about serial killers. 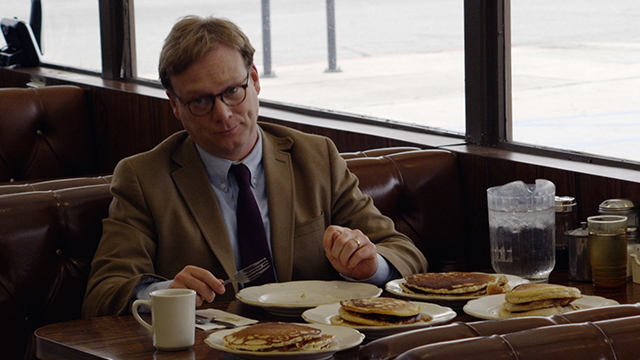 Don't watch shows about people who kill in increasingly disturbing ways? I don't blame you. Want an alternative? Try Comedy Central's often-funny "Review," a platform for Andrew Daly, a "MADtv" vet who has also appeared in films as diverse as "Semi-Pro" and "The Informant!", that premieres on 3/6. Daly plays Forrest MacNeil, a critic of life. He doesn't review movies, books, or restaurants. He reviews experiences. So, someone writes in or sends a video to Forrest's imaginary TV show asking him to review, for example, "Addiction" or "Racism" or "Sex Tapes" and he tries it out. The results are hit-and-miss but often very funny. Daly has a high-speed sensibility that doesn't sacrifice intellect for the sake of a joke. Few people could make a man's descent from considering addiction to full-blown coke addict work but he somehow does. And then he gives it a star rating. It takes a few episodes to really click but the third episode screened, "Pancakes, Divorce, Pancakes" has a twisted brilliance even in its very premise.