When it comes to arthouse cinema, there was arguably no era richer in exploration of sexuality than the 1970s. Ushered in by Ken Russell’s “Women in Love” (1969) and Bernardo Bertolucci’s “Last Tango in Paris” (1972), climaxing with Nagisa Oshima’s “In the Realm of the Senses” (1976) and symbolically capped with the “Airotica” sequence in Bob Fosse’s “All that Jazz” (1979)—a balletic farewell to pre-AIDS promiscuity that itself will prepare the transition towards the more glossy smut of, say, Adrian Lyne—the 1970s arthouse sex spree remains unparalleled. Movies of this particular time might have had many faults (their undeniably male-centric gaze being the chief one), but they all shared a quality not easy to come across in our litigation-wary time of preemptive “Fifty Shades of Grey” dullness: they were willing both to offend and to question the status quo.

Polish émigré filmmaker Walerian Borowczyk (1923-2006) both defines the surge of erotically frank cinema of the period and transcends it. He was the singular major filmmaker to not only keep pursuing erotic themes way beyond the game-changing conservative turn in world film culture (roughly coinciding with the AIDS plague of early 1980s), but to even cross over to the illicit world of soft-core pornography by his collaboration on the fifth installment of the “Emmanuelle” series in 1987. And while that (weak) film included a sequence shot during the actual Cannes Film Festival—the very vestige of respectability that “Emmanuelle” series couldn’t even aspire to—it’s vital to remember that only few years prior, in 1975, it was in Cannes’ Main Competition that Borowczyk presented what remains his finest feature, namely “Story of Sin.” Now available on Blu-ray from Arrow Academy (in both Region 1/A and Region 2/B pristine dual-format editions), the only feature film Borowczyk made in his native country proves to be an underappreciated masterpiece that merits rediscovery and celebration—not least in the director’s homeland, where the restored version is not available at all.

Based on a 1908 novel by the director’s compatriot Stefan Żeromski (already filmed two times before in Poland, in 1911 and 1933, as well as in Italy in 1918), “Story of Sin” tells the story of Ewa Pobratyńska: a young Polish woman first seen receiving absolution from a Catholic priest and spending the remainder of the film’s 130-minute running time spiraling into variously defined vice. Unbridled lust, infanticide, murder, prostitution, extortion … You name it, Ewa does it, unflinching and propelled by an unstoppable surge of l’amour fou she feels for one Łukasz Niepołomski (Jerzy Zelnik), a rather unassuming anthropology student who rents a room at Ewa’s parent’s impoverished Warsaw brownstone. What begins as a heated exchange of increasingly tender letters, ends in a sinful affair (Łukasz is married and struggling to get a divorce from the Catholic Church) and starts a pattern of moral descent as inexorable as it is outlandish in Żeromski’s pulpy plot twists. (Suffice to say that Ewa is flung by her passion as far as Monte Carlo and at one point wields a curare-filled syringe in a mid-coital murder sequence that would give Paul Verhoeven pause.)

Żeromski’s novel, widely known as the weakest one in his rich and complex oeuvre, makes for a rather tough read nowadays: 450-plus pages of mostly purple prose intertwined with philosophical discussion is less than captivating. Still, Borowczyk’s script beautifully condenses the text, as well as largely lets go of Żeromski’s unpleasant focus on sordid details of human destitution. While not exactly “a Polish Charles Dickens” (as suggested by Samm Deighan in an otherwise insightful audio commentary she co-hosts with Kat Ellinger on the Arrow disc, and which highlights the work’s deep feminist strain), Żeromski did partake in his era’s socialist utopianism, best embodied by Ewa’s lengthy stay at a bucolic farming co-op, which briefly seems like a last vestige of decency in a world otherwise uniformly corrupted by greed. 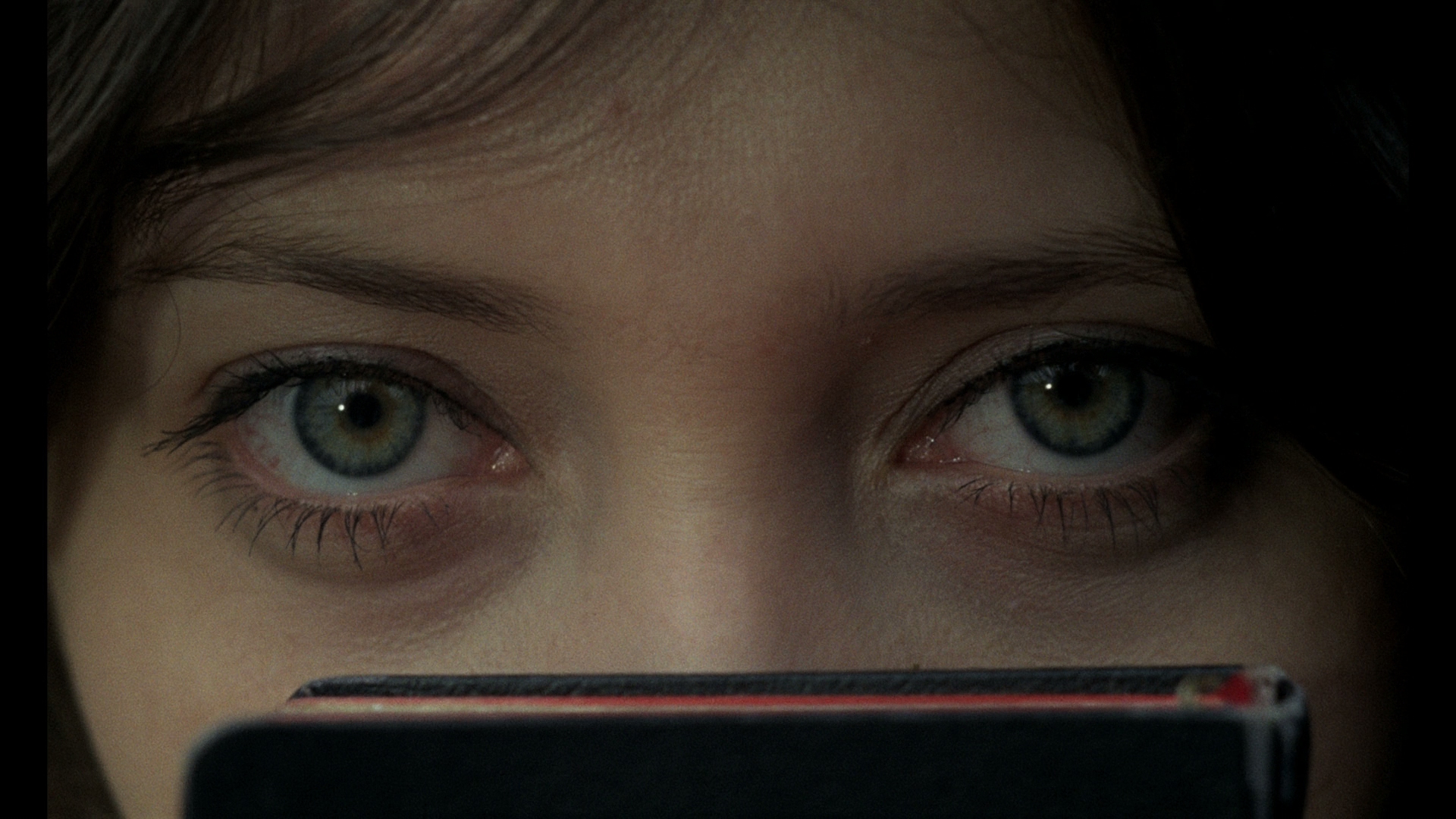 The film swells and ripens, much in sync with the constant ebb and flow of Ewa’s inexhaustible passion, the musical equivalent of which Borowczyk finds in Mendelsohn’s “Violin Concerto in E-minor,” exploding thrice on the film’s soundtrack and highlighting various shades of Ewa’s carnal folly. The fact is that the entire machinery of the film—from Teresa Barska’s meticulous production design to Zygmunt Samosiuk’s atmospheric lensing—serve to express its concern with human passion and with the various ways in which religion, morality and culture try to saddle, limit, or indeed extinguish human nature. Ewa is at all times surrounded with physical objects that seem to possess lives of their own, and perhaps feed on hers: from the patriotic bric-a-brac of her parents’ apartment (Kościuszko and Chopin always kept in plain sight) to the various artwork adorning walls and windows, Borowczyk makes sure we see Ewa as crowded in by the material world.

All of this finds indispensable anchor in Grażyna Długołęcka’s sustained, brave performance, which violated many taboos still held in Poland of 1975 and for which the debutante actress paid a personal price: as she states in the interview available on the disc, many of her Polish colleagues resented her sudden rise to fame right after graduation from acting school—and reacted with systemic ostracism that badly injured the talented actress’ career.

There are fascinating connections to be made between this film and Borowczyk’s earlier graphic and animated work, most of which are explored throughout the disc in a plethora of extras, all helmed by the extraordinary champion of Borowczyk, Daniel Bird: the man to whose passion and diligence we basically owe the current Boro Renessaince. Tiny slivers of light coming through a wooden wall in the infanticide scene bring to mind “The Games of Angels” (1964), Borowczyk’s haunting depiction of mutilation as a form of play—not to mention the spirit of “Rosalie” (1966), with its focus on female transgression, being present throughout.

Despite its illicit fame (solidified somewhat by international VHS copies of the film with pasted-in female masturbation footage, shown to me recently by Borowczyk historian Kuba Mikurda), “Story of Sin” is a deeply moral meditation on limits of human freedom, as rapturous as it is painfully aware of human incapability to live on pleasure alone. It is also a sharp portrait of the way society defines what it means to be a woman among men, since the story involves no less than four archetypes in this respect: the free-thinking pleasure-seeker (Niepołomski), the moral man of financial means (Szczerbic), the brutal transgressor (Pochroń) and the hopeless idealist (Bodzanta).

This seminal edition comes as a welcome addition to the already-astonishing Arrow Academy releases of Borowczyk’s work, including the monumental “Camera Obscura” box-set and an equally luscious edition of “The Strange Case of Doctor Jekyll and Miss Osbourne” (1981)—arguably Borowczyk’s last great film, as well as one sharing numerous traits with “Story of Sin” (such as sequences of overheated lovemaking in a moving horse-drawn carriage). One can only hope that “Lulu” (1980) will be next—and that Polish cultural decision-makers will belatedly recognize what amazing oeuvre they need to promote, honor and keep alive at all cost.

Walerian Borowczyk’s “Story of Sin” is now available as a Region 1/A dual-format release by Arrow Academy. To order your copy, click here.