We're happy to present an excerpt from Jason Bailey's "The Ultimate Woody Allen Film Companion," now available in stores and online. You can pick up a copy by clicking here. 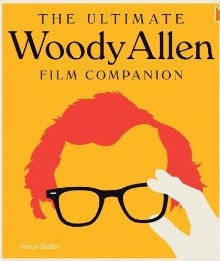 Synopsis: A complete look at the extensive, ageless, unparalleled filmography of Woody Allen. Writer, actor, director, comedian, author, and musician, Woody Allen is one of the most culturally and cinematically influential filmmakers of all time. His films - he has over 45 writing and directing credits to his name - range from slapstick to tragedy, farce to fantasy. As one of history's most prolific moviemakers, his style and comic sensibility have been imitated, but never replicated, by countless other filmmakers over the years. In The Ultimate Woody Allen Film Companion, film writer
Advertisement
Jason Bailey profiles every one of Allen's films: from his debut feature, What's Up, Tiger Lily, through slapstick classics such as Take the Money and Run and Sleeper; Academy Award-winning films such as Annie Hall and Hannah and Her Sisters; and recent gems such as Midnight in Paris and Blue Jasmine. Bailey also includes essays on the fascinating themes that color Allen's works, from death and Freud to music and New York City. Getting up close and personal with the actors and actresses that have brought the iconic films to life, this book's behind-the-scenes stories span the entire career of a man whose catalog has grown into a timeless cornerstone of American pop culture. Complete with full cast lists, production details, and full-color images and artwork, The Ultimate Woody Allen Film Companion is the ultimate, indispensable reference to one of cinema's most beloved and important figures.

When Woody Allen started doing his nightclub act, he quickly realized that there was more to being a performer than the joke-machine writing he’d been doing since high school. Strong material wasn’t hard to come by, and that’s why Catskills comics with socko gags were a dime a dozen. The comics he idolized (Bob Hope, Groucho Marx, W. C. Fields, Jack Benny) were about character first and jokes second. Once the audience knew and understood the character, they would chuckle at even their weakest bits. To maximize your laughs, you had to have a persona.

And from that realization, “Woody Allen” was born. He wore thick-rimmed black glasses, the telltale accessory of a bookish intellectual, a notion furthered by his frequent literary allusions and surrealistic wordplay. Part and parcel for the comic intellectual, then, was the presumption of physical weakness, the image of the meek, bullied nebbish, an image further bolstered by the slight frame and thinning hair that made him a combination of 98-pound weakling and red-headed stepchild. He would feign braveness, but back off immediately—in both physical altercations with the same sex and romantic entanglements with the opposite, talking the game of a white-hot lover but, in practice, more of a horny bumbler. And then there was the voice—“a nice Jewish boy gasping for air,” as writer Foster Hirsch put it—a nasal Brooklynese that danced right up to the edge of a whine. His onstage and onscreen patter was a tumult of stammers and mumbles, charging and backtracking, pausing and rephrasing, all little tricks that created the impression of nervousness and aimlessness, yet diverting us (his magician’s training, that) from noticing the clever construction of the set-ups and punch lines, or how masterfully he deployed those “um”s and “tch”s as part of the musical rhythm of his joke delivery.

The timing was right for this kind of character. Art goes in cycles, and the aggressive style of Milton Berle, Alan King, and their ilk was on the way out. Allen’s approach was quiet, contemplative, thoughtful. He objected to the label “intellectual comedian,” insisting, “I’m a one-liner comic like Bob Hope and Henny Youngman. I do the wife jokes. I make faces. I’m a comedian in the classic style.” However, his work was peppered with references far beyond the scope of a Hope or Youngman, and while he did “do the wife jokes,” much more of his material—and the best of it—looked inward.

Woody’s rise coincided not just with a proliferation of a more pronounced ethnicity in nightclub comedy, but—particularly when he migrated from the stage to the screen in the 1970s—a shift in cultural attitudes about masculinity and sexiness. Matinee idols like Redford, Newman, and Beatty had to make way for the likes of Hoffman, Hackman, and Pacino, movie stars who looked like real people. The triple-threat Allen would come to embody, in the words of critic Diane Jacobs, “the struggles of late-twentieth century urban man.” Woody himself put it another way: “My character was assigned to me by my audience. They laughed more at certain things. Naturally, I used more of those things.”

“Woody” was, as biographer Eric Lax writes, “a hilarious creation concocted from a wildly exaggerated personal basis.” Allen, as he has frequently protested, was no intellectual; he got lousy grades and only read the Great Works of Literature to keep up with college girls he wanted to bed. Like Leonard Zelig, he “preferred watching baseball to reading Moby Dick.” And Diane Keaton has said that he had no trouble getting girls—particularly, we can presume, after he became a stage and screen star.

The two halves of this split personality began to merge in 1977, when he made "Annie Hall," his first film to draw on personal relationships and recognizable characters rather than broad parody and wild verbal cartoons. Since the romance at its center was mirrored by that of the actors dramatizing it, audiences and critics presumed it was based on their relationship—indeed, this level of voyeurism may have initially contributed to the film’s appeal. And from that point on, puzzling out the genealogy of Allen’s stories, figuring out what was “real” and what was fiction, became an inextricable component of Allen fandom.

The filmmaker objected—quietly, at first. “My films are only autobiographical in the large, overall sense,” he said in 1980. “The details are invented, regardless of whether you’re talking about "Annie Hall," "Interiors," or "Manhattan."” He said this while promoting "Stardust Memories," about which he predicted, “This is not me, but it will be perceived as me.” Was it ever. That film’s portrayal of a harried filmmaker driven crazy by the demands and inanities of his monstrous fans provoked a backlash, under the assumption that this was, in fact, the opinion Allen held of those who admired him. Two years later, he was still trying to explain it: “Not only did those things not happen to me, I do not have those problems. I play a character who’s a filmmaker because I’m familiar with the outer trappings of a profession like that. I can write about them. I’m not going to make myself a nuclear physicist who’s having a nervous breakdown, because I just don’t know what he’d do in the course of a typical day.”

But the die was cast, and as the years passed, Allen became less tolerant of all this talk of autobiography. “The public doesn’t know me,” he told Eric Lax, “only the character I present to create conflict and laughs.”

To be sure, viewing the entirety of his work through the frame of autobiography is a minimizing approach. There is so much to dig into that running every film through a life-to-art decoder misses what is so valuable and remarkable about his fiction. But Allen himself admits that the “dividing line between life, my own life and art is so indistinct, so fine that it’s an obsessional theme with me.” In his book The Reluctant Film Art of Woody Allen, Peter J. Bailey writes of "Husbands and Wives," “for Allen to pretend that a film which insists (as many of his screenplays do) on the autobiographical basis of art should be read completely in isolation from the real-world circumstances that clearly inspired its mood, and certainly influence its plot, reflects an equally oversimplified understanding of the complex transactions between art and life which are his films and which so often comprise the subject of his movies.”

In interviews, it often seems as though Allen is conflating—deliberately, perhaps—the notions of memoir and autobiography. If specific facts don’t jibe on a point-for-point basis, that doesn’t necessarily make the work any less autobiographical. "Annie Hall" was clearly inspired, at least to some degree, by the soul-searching and loneliness he experienced after his relationship with Keaton ended, just as "Husbands and Wives" was written in the mindset that had not yet ended a long-term relationship for a far younger woman, but was perhaps capable of doing so.

From there, the line to "Deconstructing Harry"—a film about nothing less than the equally productive and destructive inclinations of merging fact and fiction—is that much clearer. As Foster Hirsch wrote in Love, Sex, Death, and the Meaning of Life, “In caricaturing the public perception of him as a sex-addicted workaholic—an image that Allen himself has fostered—he seeks to defuse the prosecution. In giving so much apparent ammunition to his denouncers—see what a prick I am, how I use people for my work, how untrustworthy I am in affairs of the loins and the heart—he enforces a countermove. . . . It’s as if Allen decided to paint a portrait so extreme that his detractors might be coaxed into reevaluating their estimate of him.” And it is that play with persona and perception, coupled with the film’s raw language and attitudes (is this the real Woody who’s been hiding all this time?) that gives the film its undeniable charge.

“I know it’s kind of a fun parlor game to play,” documentarian Robert Weide says, “but I think in the long run, it’s a little meaningless. In the same way that any author uses their own life experiences, their own thoughts, and then infuses those things into their books and into their work, I think Woody does that—no more and no less than any other writer, or writer/director.” He may be right. Way back in 1974, a less-reserved Allen told Eric Lax, “Almost all my work is autobiographical, and yet so exaggerated and distorted it reads to me like fiction.” This may be the key to understanding his films in relationship to his life—rooted in his own experiences, loves, thoughts, and fears, yet, for him, turned into fiction once it comes out of the typewriter. Once it’s out of his head and out in the world, it is no longer him. But there’s also little doubt that the candor and honesty of is what makes it so open and relatable to those who view it; the more personal he gets, the more universal it feels.

The Trial of the Chicago 7