Official Synopsis: One of the most powerful yet idiosyncratic voices of American culture, Richard Pryor often remains an enigma despite the strikingly personal quality of his best work. This series of essays attempts tracks the parallels between the comic’s work and the black experience, contextualizing his art and persona among the tradition of Southern storytellers, the Civil Rights movement, and the complicated racial identity of Reagan’s America. Focusing on the broad diversity of Pryor’s career, from his albums to his concert films to his movies, Jason Bailey attempts to answer a series of questions about this uniquely American entertainer: Was Richard Pryor a product of his society, or an instigator of it? Was Richard reflecting us, or were we reflecting Richard? Was he a mirror, or a prophet? "Richard Pryor: American Id" can be purchased here.

Richard Pryor appears twenty-three minutes and thirty seconds into the strained, unfunny, would-be counterculture farce "The Phynx" (1970), in the midst of a military training sequence for the band at the center of the story (such as it is). A whistle blows, and we see the four men in the mess hall with Pryor. The counter between them is covered in soul food. “Gentlemen,” he says, “my name is Richard Pryor, and I’m here to teach you soul.”

One of the men, the token black member of the group, asks, “Hey, man, you don’t eat this stuff, do you?” Richard looks away, a soldier steps in front of the camera, the whistle blows again, and the scene is over. Pryor is onscreen for all of thirteen seconds.

Putting aside the baffling nature of the “scene”—it’s one thing to hire Pryor and not know what to do with him, and another to not even bother giving him a single joke—there’s something oddly perfect about his one line. “My name is Richard Pryor, and I’m here to teach you soul.” It’s a fairly apt description of most of his film work from the mid-sixties to the mid-seventies: barely present and utterly wasted, on hand merely to provide a shot of “soul.”

When he pops up (from behind a desk, screeching “Whaddaya want!”) in the 1974 Sidney Poitier–Bill Cosby comedy, "Uptown Saturday Night," as hyperparanoid private detective “Sharp-Eye Washington,” he gives the sleepy picture a jolt of electricity and danger it can’t contain; he’s barely arrived before he’s sent packing. He’s little more than a glorified extra in the counterculture rock comedy "Wild in the Streets," his name (“Stanley X”) and his skin color encompassing the entire characterization. Though he dominates the promo art, he’s in and out in less than ten minutes of "Car Wash," where his “Daddy Rich” rolls up in a gold Cadillac (license plate: “TITHE”) and advises the gathered crowd to “Believe in the Lord, and believe in yourself. And most of all, believe in that federal green! Because money walks and bullshit talks.” He’s such an afterthought in so many movies, in fact, that countless biographies insist he’s in John Wayne’s "The Green Berets," ignoring that (1) he’s nowhere to be seen in it, and (2) it features an altogether different Richard Pryor. 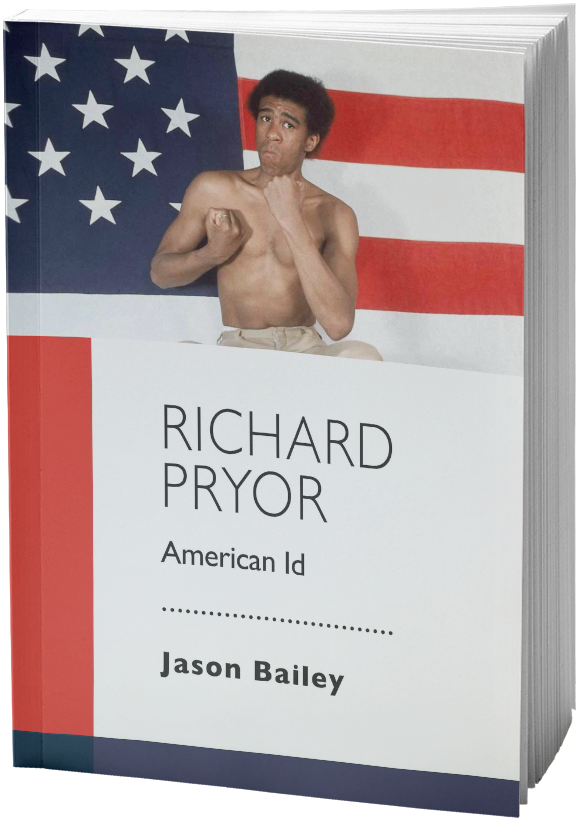 "Silver Streak" would have been another hit-and-run, but (as with "Lady Sings the Blues" before it) his role was expanded when the filmmakers got a look at the rushes. Initially a Gene Wilder vehicle, it was made over on the fly into one of the first-ever black/white buddy comedies, finally lifting him from the ranks of featured players. Now, Hollywood saw, he could not only carry a movie, but open one (its fifty-one-million-dollar take made it, at that point, one of the highest-grossing movies in history). The seeds had been planted: Richard Pryor was a movie star.

It was the fulfillment of a lifelong ambition. As a child, he’d escape his hard reality by fleeing into the fantasy worlds of Peoria’s downtown movie theaters; in his autobiography, he recalls pasting his name over Marlon Brando’s on a newspaper photograph of a movie theater marquee. Yet he admits to knowing, when the opportunities and paychecks of Hollywood finally beckoned, that “my insurgent brand of humor didn’t translate as well to the silver screen as I’d hoped . . . I compromised what I wanted to stand for.”

So why did he do it? “The monies. I wanted the monies.”

He uses this affectionate nickname throughout his book, referring to “monies” less as an entity or an idea than an old friend, one that’s gotten him into a fair amount of trouble, but that he just can’t quit. There’s little doubt that “monies” were a—if not the—top priority for Pryor, throughout his life but particularly in the 1980s. “That was the goal, the dream,” he writes. “The more the better. I figured the more distance I put between me and poverty, the happier I’d be.”

It was a priority inherited from his grandmother Marie, the savvy businesswoman, whose motto was “Don’t mess with my money.” He abided by the same principle, and it’s hard to blame him; when you spend your formative years in the kind of brutal poverty Pryor did, it’d be easy to fear that wealth must be a fleeting thing, that you’re always just one paycheck from going back to sweeping floors in a Peoria pool hall. And that sense of fear and insecurity can help explain many of his career choices—and even his personal ones. “I must drive my accountant crazy,” he said onstage, “ ’cause I wake up at three in the morning, go, ‘Hey, man, what the fuck—how much is it? Well, prove it, bring it over.’ ” As he fell deeper into the pit of drug addiction and depression, his monetary paranoia only increased; late on the morning of June 9, 1980, the day that would end with Pryor in flames, he marched into the United California Bank and attempted to cash out his accounts, convinced that his money was being stolen by his lawyer and his accountant.

His preoccupation with “monies” was the subject of his finest movie of the seventies, and several of his worst of the eighties. Paul Schrader’s 1978 auto factory drama "Blue Collar" was a notoriously contentious production; the first-time director’s strategy of pitting his three stars against each other off-screen for the sake of narrative tension resulted in dynamite cinema, but also a hair-trigger shoot beset by jealousy, shouting matches, physical altercations, and worse. Whatever the methodology, however, Schrader got the finest performance of Richard’s film career, creating a character that fused his rust-belt background with the righteous indignation of his stand-up persona. He’s given scenes to joke and scenes to rage, but the most chilling comes at the end, when he faces off against Harvey Keitel and doesn’t blink. Standing on the front porch with the man who was once his running buddy, calmly making his case for selling out, he lays out his anger and bitterness (“You’re my friend, but you’re thinkin’ white . . . you’ve got more chances than I got, Jerry”) with a coldness that is matched by his simultaneous interactions with his playing children (“I don’t give a fuck what you’re playing, get out of the street,” he snaps).

The rest of the film is suffused with that sense of overwhelming hopelessness—even in its jokes, which have the sting of gallows humor. It’s the kind of studio picture that could’ve only been made in the 1970s; it doesn’t insult its audience with a tidy, happy ending—it’s about working people (the extras look like roughnecks pulled off the line rather than hopefuls from Central Casting), and it’s preoccupied with the concerns of the working class. Schrader gives us scenes of Keitel at the kitchen table, arguing with his son over how many servings are in a box of Hamburger Helper, discovering that his daughter has used pieces of wire to fashion the braces he can’t afford to provide. Pryor is visited by an IRS man, who busts him for making up kids for the tax break, and he pleads with the anonymous bureaucrat—“Where am I gonna get that kinda money? Shit, you talkin’ about my life. . . . I take home two-ten a week, man, goddamn”—before finally losing his cool. “Fuck Uncle Sam! You give the politicians a break! Agnew and them don’t pay shit!”

Schrader only lets his protagonists cut loose once, for a night of debauchery, an orgy of sex and coke that gives them a momentary taste of freedom and respite from responsibility, only to be cruelly yanked away. The morning after, his camera holds on them, recovering from the lives they’ll never have, not just because of the lives they already lead, but because they just plain can’t afford it. “Sometimes I get so depressed, I start thinking about the shit I promised Carolyn, shit I ain’t never gonna be able to do,” Pryor says. “I know, a man’s supposed to be able to take care of his family. I never was good with money. I’m just fuckin’ . . . always broke, man.”

The delivery is delicate. Pryor doesn’t reach for sympathy, or play the scene for sadness or despair. He just states these, the facts of his life. He and his friends sit on that couch in a daze, their sweet escape now little more than a blistering hangover. And a big Pontiac billboard peeks in through the window behind them, mocking them, a reminder that they still belong to their employer—that, as Pryor says earlier, “Everybody knows what the plant is. The plant is just short for plantation.”