"The Green Berets" simply will not do as a film about the war in Vietnam. It is offensive not only to those who oppose American policy but even to those who support it. At this moment in our history, locked in the longest and one of the most controversial wars we have ever fought, what we certainly do not need is a movie depicting Vietnam in terms of cowboys and Indians. That is cruel and dishonest and unworthy of the thousands who have died there.

It is not a simple war. We all know it is not simple. Perhaps we could have believed this film in 1962 or 1963, when most of us didn't much care what was happening in Vietnam. But we cannot believe it today. Not after television has brought the reality of the war to us. Not after the Fulbright hearings and the congressional debates and the primaries. Not after 23,000 Americans have been killed.

Whether we are for the war or against it, we all know it is a terribly complicated struggle. There is a desperate need in this country for a film that will depict the war in honest terms. There have been two such films: Eugene Jones' heart-wrenching masterpiece "A Face of War" and the Academy Award-winning documentary "The Anderson Platoon." The Jones film has never played in Chicago. The other closed after a week.

Neither film is against the war. Instead, both try to explain it in terms of the confused struggle there, and the soldiers who are fighting it. It is this sort of film that many Americans hunger for: a film that will tell it like it is. We need no more propaganda.

But propaganda is what we get in "The Green Berets," a heavy-handed, remarkably old-fashioned film. It is supposed to be about Vietnam, but it isn't. The military adventures we see could be from any war. In one, the enemy attacks a camp and the two sides shoot at each other. In the other, a team of soldiers kidnaps a Viet Cong general.

Both episodes are handled the way Hollywood always fights wars: with clichés and stock characters. There is an Irishman named Muldoon, a doubting journalist, a Negro, a little refugee kid with a pet dog, a hard-bitten veteran and the rest of the stock characters who fight every war for us. Everybody is there except the Jewish kid from the Bronx and the guy named Ole with a Swedish accent.

What does this have to do with Vietnam? What about the reality there? What about the campaign to pacify the countryside? To win the psychological war? To devise techniques to fight a guerrilla war? To cope with the tragic dilemma of civilians in a ravaged land? To establish democracy where it has not been known before?

As I have suggested, the film is embarrassing to hawks as well as doves. In one remarkable speech, John Wayne tells the journalist: "Out here, due process is a bullet." Is that our policy? What is our policy? The film doesn't make it clear. Judging by "The Green Berets," we seem to be fighting a war for no particular purpose against a semi-anonymous enemy. There is no word about democracy or freedom, nationalism or self-determination. It appears that the war has been caused entirely by the enemy and that the enemy commits atrocities because he enjoys them. There seems to be no other issue.

This is not only dishonest, but unfair. If I were a soldier in Vietnam, I would not want to be represented by "The Green Berets." I would not want my fellow citizens to think I was as stupid and simple-minded as the Americans in this film. I would prefer a more realistic film, in which I was seen not as a hero but as an individual human being trying to act ethically in a difficult position.

Such a film has been made: Jones' "A Face of War." I saw it in the company of several marines recently returned from Vietnam. They found it a fair and true film, neither for nor against the war but about it. It is a soldier's film, starring not John Wayne and his fellow stereotyped heroes but actual infantrymen in the field, most of them young, sincere, brave, weary and saddened by the things they see and some of the things they must do.

"A Face of War" is available for exhibition in Chicago. It should be shown, not in a little art theater somewhere, but in one of the big Loop movie palaces. At this time, confronted by this war we all need to understand, "A Face of War" might help neutralize the virus of "The Green Berets." For what we desperately need are not heroics and bugle calls, and clichés and atrocity stories, but honesty and compassion. 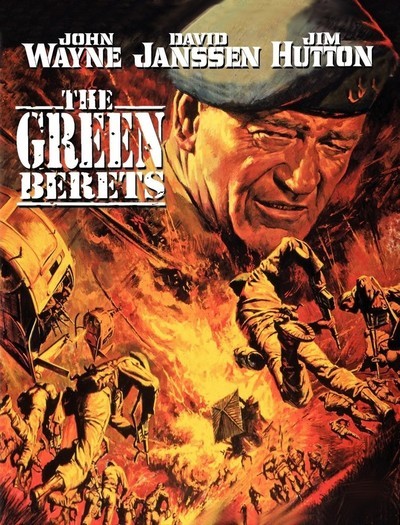