While most of the broadcast and cable networks have gone into a holding pattern as NBC dominates television headlines with their broadcast of the Sochi Winter Olympics (with the notable exception of AMC's "The Walking Dead," which has become such a juggernaut that no mere sporting event can delay its return), Amazon and Netflix have taken the opportunity to offer some interesting alternatives to downhill skiing. Whereas the second half of February is dense with new and returning shows (we'll hit a lot of them in this space next week, including "About a Boy," "Mind Games," "The Americans," "The Red Road," "Vikings," "Hannibal," and more), it's a little quiet right now in TV land. And so Amazon has perfectly timed the launch of their second round of pilots, a clever program in which they let the viewer become the studio executive. Ten new shows premiered on the streaming service, making them available not just for Prime members but anyone who goes to Amazon.com or has the app on their Blu-ray player or multimedia machines like the Sony or Microsoft gaming consoles. Viewers are encouraged to watch all ten and let Amazon know via feedback which pilots they want to see taken to series. Last year, the focus was on comedy, with the Garry Trudeau-John Goodman vehicle "Alpha House" taken to series without much fanfare. This year's crop feels more developed, more diverse and more ambitious. And yet none of them will make nearly the waves certain to be felt by the first episode of season two of "House of Cards."

The 2013 Amazon pilot season was interesting but also somewhat second-tier. One got the impression that all of the programs being considered had been given the thumbs down vote by a group of executives at HBO, AMC, FX, etc.  For season two, Amazon has raised the star power, genre diversity, and overall pedigree, and yet that also-ran atmosphere remains. In particular, the five young-adult or kids' programs range from merely boring ("Maker Shack Agency") to the generally awful ("Wishenpoof!"). When even my four-and-a-half-year-old son, who loves TV, can't get engaged by a flashy cartoon, it's not working. The fact is that there is actually a lot of great programming out there for kids—smart, funny, clever shows that can educate and entertain—and these programs don't compare. As I'm sure most parents are, it's important to be picky about what your kids watch. They can do better than this.

Which gets us to the meat of the new season: Three comedies and two dramas, all of which have some star power and could conceivably build an audience over a whole first season. I wouldn't be surprised to see any of the five get the full order. Which is not meant to imply they all deserve it. 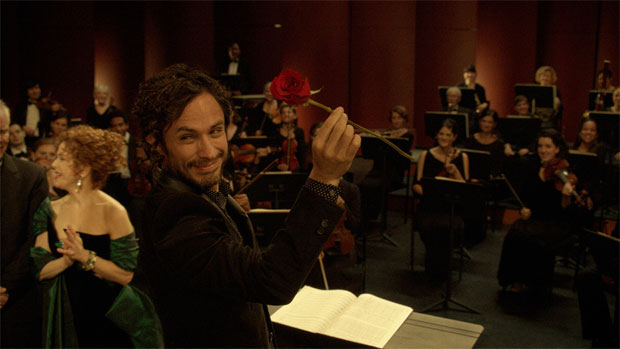 "Mozart in the Jungle"

Let's start at the top. Easily the show that had me itching most violently for another installment was the curtain-raising "Mozart in the Jungle," based on the 2005 memoir of oboist Blair Tindall. It's easy to understand why a network like HBO might have been hesitant to greenlight another show that features struggling New Yorkers, what with "Girls" getting backlash, but this show feels like it would have been right at home on the network. Directed by Paul Weitz ("About a Boy") and written by Roman Coppola and Jason Schwartzman, "Mozart in the Jungle" is packed with an incredibly charismatic cast that includes Malcolm McDowell, Saffron Burrows, Bernadette Peters and Gael Garcia Bernal. As with all pilots, the only judgment that matters is "Do you want to watch another one?" With its Coppola/Schwartzman balance of oddity and emotion along with its A-list cast and confident tonal balance, I really want to see more "Mozart in the Jungle."

Would I Watch More?: The minute they're available.

Who's It For?: Fans of HBO programming like "Girls". 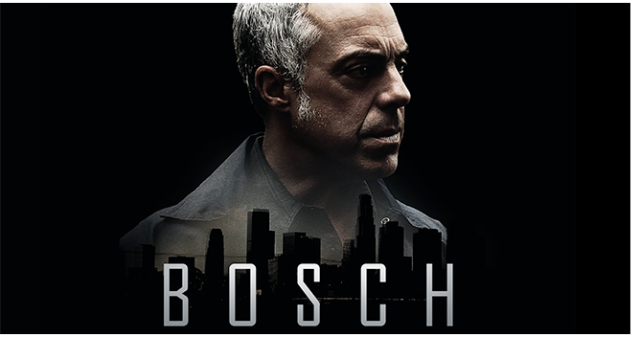 I feel guiltier about this next admission, but I would totally watch another episode of "Bosch," the relatively by-the-numbers procedural based on the books by Michael Connelly. The scene-stealing Titus Welliver ("Deadwood") stars as Harry Bosch, a cop caught up in a shooting that has resulted in legal action. As he waits for the trial that could change his life, he stumbles upon a major case when the bones of a child are unearthed in the woods. "Bosch" often plays like an NBC Dick Wolf drama only with more edge, and, most importantly, more focus on process. I like the amount of time Jim McKay (TV vet of "Big Love," "Treme," and more) spends with the procedure of crime-solving, such as the analysis of bone structure to determine cause of death that would have been dismissed with a montage on most "CSI" shows. "Bosch" is imperfect but Welliver is an interesting lead (and any show with Lance Reddick in the supporting cast deserves more than one episode) and the "pilot question" is answered simply yet again.

Would I Watch More?: Yes, although I'd probably space episodes out as dark cop dramas work better in small doses.

Who's It For?: Fans of A&E programming like "Longmire." 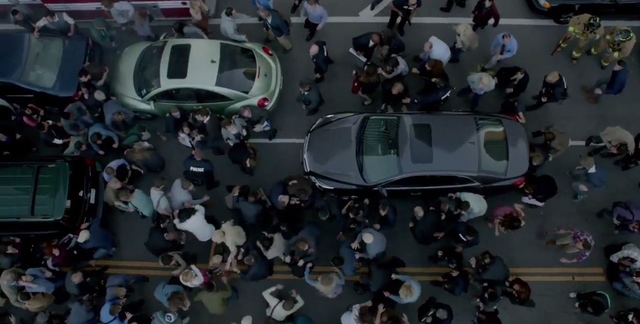 One comedy, one drama. What's left? Let's skip to the bottom of the pile because its horrendous failure is likely to be your biggest disappointment. Chris Carter, the influential man behind "The X Files," returns to TV with his "LOST" wannabe, the ineffective and annoying "The After." Right from the beginning of this show about the end of the world, something just feels wrong. The herky-jerky pacing, the flat dialogue, the poorly-assembled cast; I have seen a LOT of "LOST" clones from "Threshold" to "FlashForward" and this is one of the worst. A seemingly random group of people get stuck in an elevator on the day of the apocalypse. They emerge thinking that no time has passed but the world has changed. And so has TV since Carter left it.

Would I Watch More?: Carter sets up enough questions that I might be curious but only if there's NOTHING else on.

Who is it For?: Fans of low-rated SyFy programming. 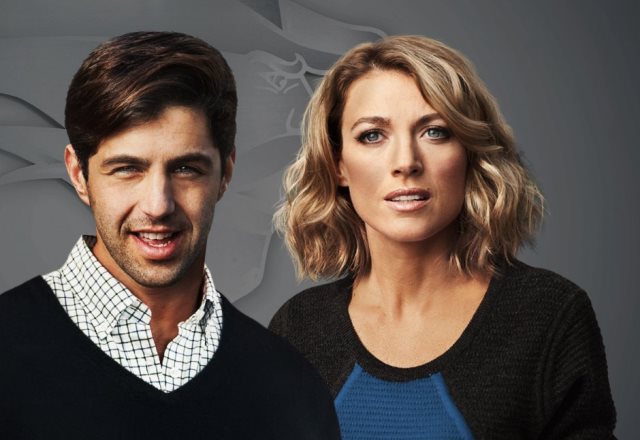 I always considered Natalie Zea one of the more underrated players on FX's brilliant "Justified" and so I was excited to see her headline a sitcom about a woman in over her head when her husband dies and leaves her a football team. Going for raunchy, edgy comedy, this sitcom tries to push the envelope of taste but doesn't take it far enough to not feel desperate. A football player's pet monkey gets a hold of his gun and causes a PR nightmare. A star player named (ugh) Hurricane Jesus has ridiculous demands. "The Rebels" doesn't take place in the real world but isn't broad enough or daring enough to be called satire.

Would I Watch More?: The cast, especially Zea, is charismatic, and the intellectual commitment is so small that I probably would but I wouldn't be proud of myself.

Who's It For?: Fans of FXX comedies. 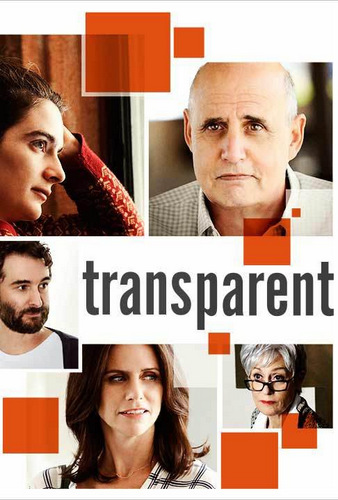 Which brings us to the Amazon pilot with the highest pedigree and the most attention, Jill Soloway's examination of family dysfunction. Soloway knows a thing or two about family dramedy, having written for "Six Feet Under" and "United States of Tara," and winning an award at Sundance 2013 for "Afternoon Delight." Jeffrey Tambor plays the father of three adult children (Gaby Hoffman, Jay Duplass, Amy Landecker), and none of them have their relationship lives together. As much as I like the cast here, especially Hoffman, "Transparent" feels over-written and over-cooked, a show trying to be edgy and different and sacrificing realism in the process (which is how I felt about "Afternoon Delight" for that matter).

Would I Watch More?: It's a tough call. A cast this strong always holds potential but if the writing doesn't feel more genuine in episode two, I'm out.

Who's It For?: Fans of Showtime programming like "Tara". 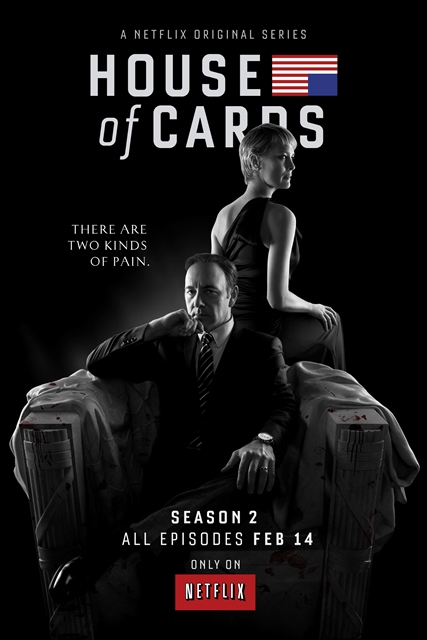 None of the ten programs on Amazon, even if they all get full seasons, will garner a fraction of the attention sure to be paid to Netflix's "House of Cards" when the entire second season is released on Friday, February 14, 2014. With spoiler concerns that have locked down discussion of the first few episodes of the new season, little is known about the return of Frank Underwood (Kevin Spacey) and his Machiavellian machinations. Try and keep it that way. The first episode, in particular, features a truly jaw-dropping turn that is best experienced without warning. And don't worry, even knowing something intense is going to happen, you won't see it coming.

So, talking around the plot of "House of Cards" so as to keep your enjoyment of it as fresh as mine, the question is do the creators of this gate-crashing program suffer sophomore slump? Considering the fact that I found the first half of the first season of "House of Cards" MUCH stronger than the melodramatic second half, it's impossible to say for sure but there are notable changes to the tone and structure of the program. Bluntly, it feels like everyone involved, especially Spacey and Wright, is having more fun. Spacey's smirk is more pronounced and Wright is embracing the Lady MacBeth aspects of her role that were under-utilized in season one. The show has become, for lack of a better word, trashier, tending more to "Scandal" than "The Sopranos," and that's a good thing. Some character may be lost in the transition but I think the creators of "House of Cards" have recognized that this show is not "True Detective." It's not something to be savored and analyzed. It's something most people will watch in a weekend, devouring it as quickly as possible. And so it should be a little spicier, a little sillier, a little less self-serious. I hope that tone remains because it seems to have invigorated Spacey and Wright. Most of all, "House of Cards" has an element that's too often missing from the Amazon pilots—it's fun.

Would I Watch More?: What else is there to do on Valentine's Day?

Who's It For?: Just about everyone.