"Afternoon Delight" aims at revealing relevant, recognizable truths about modern marriage and parenting. It approaches them, flirts with them, dances around them and even begins to shed some light on them before ultimately backing away into simpler, safer territory.

It's frustrating, because you can see what writer-director Jill Soloway is getting at here with her feature filmmaking debut. The longtime television writer and producer ("Six Feet Under," "United States of Tara") offers a vividly detailed depiction of a very specific kind of Los Angeles life: the upscale bohemian chic of trendy Silver Lake. Her heroine, a stay-at-home mom played by comic character actress Kathryn Hahn in a rare leading role, says and does all the right things around the other mothers at her 5-year-old son's school. She signs up for all the activities, attends all the charity auctions and wine nights. She has the right kind of soy cheese pizza waiting in the freezer for the babysitter to feed her kid.

Hahn's character, Rachel, lives in a spacious, impeccably decorated mid-century modern house with her successful entrepreneur husband, Jeff (Josh Radnor of "How I Met Your Mother"). It's a good life. They seem happy—aside from the infrequent sex, a sadly inevitable rut into which so many longtime couples fall. But still, she's not miserable. Or so she thinks.

Something is nagging at her, though—tugging at her, prompting her to seek change. We already know she's neurotic, self-deprecating and hyper-analytical from her regular sessions with a therapist (played by an understated, underused Jane Lynch). But Rachel makes the bold move of spicing things up by arranging a trip to a strip club with her husband and another couple. The lap dance she receives from a perky, petite blonde named McKenna (Juno Temple) seems pretty perfunctory but nonetheless stirs something deep within her. (Following "We're the Millers," this is the second time this summer that Hahn has played a proper mom who dares to explore her freaky side.)

Rachel finds herself ducking out of the usual daytime mommy dates to hang out downtown around the club where McKenna works. (She does this under the guise of visiting her favorite coffee truck, which she follows on Twitter; in small ways, "Afternoon Delight" is very much about Who We Are Now, which makes its eventual collapse that much more of a disappointment.)

Daily coffees and walks and talks and cigarettes inspire Rachel to swoop in and save McKenna from a life of stripping. This includes inviting her to come stay with Rachel and her family in the spare bedroom that used to belong to their live-in maid, much to the shock of Rachel's husband. That first breakfast is amusingly awkward, with McKenna slinking around the kitchen in a tight T-shirt and Jeff casually dropping words like "cacophonous" in conversation.

It's a massively contrived premise, but the ambiguity of Rachel's actions is intriguing: What's her motivation? Is she bored? In need of a distraction from her own troubles? A little bi-curious? Or does she genuinely want to make a difference in someone else's life? Rachel's interest in McKenna is reminiscent in some ways of "Desperately Seeking Susan": bored housewife finds adventure—and fresh purpose -- through a younger, free-spirited woman who seems exciting but is probably a mess.

Rachel finds out just how much of a mess McKenna is pretty quickly but is undeterred. "Afternoon Delight" edges into some and appealingly dark and dangerous territory, with Rachel placing herself in situations that force her to face who she is and what she wants out of life. Despite what the title may suggest, this is not a wacky sex romp (thankfully), but rather a serious look at a woman and a marriage in flux, which features some sprinklings of wry humor. McKenna, meanwhile, remains amiable and adorably sexy regardless of the setting; Temple plays her as more of an elusive idea than a fully fleshed-out person.

Still, this cannot end well—we know this—but the major turn "Afternoon Delight" takes is jarring and irreparable. While Soloway invited us into this world with low-key rhythms and lived-in details, she eventually pushes us away with a series of scenes that are screechy and melodramatic. And Hahn, who's on screen the whole time, is strong in comically jittery mode but seems less comfortable when it comes to the heavier, more challenging moments.

Then again, the script asks a lot of her, veering as it does from an honest, open exploration to a judgy, preachy cautionary tale. The moral of the story appears to be: Don't invite a stripper to come live with you in your home. Suggestion noted. 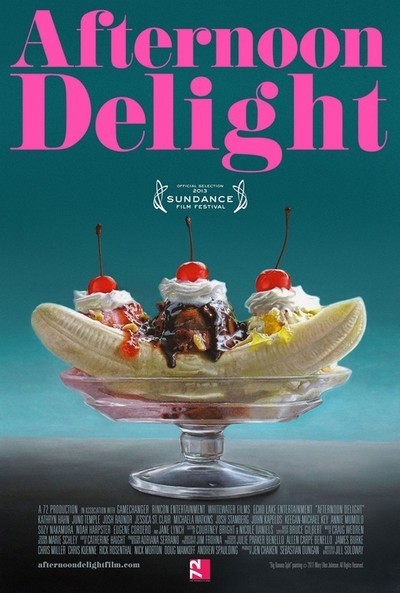