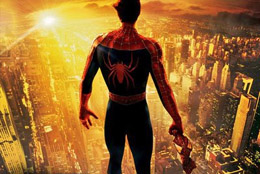 "With great power, comes great responsibility." How many times have we superhero fans heard this line, let alone understand its implications? Do we really take to heart how much sacrifice such heroism involves, or comprehend what would be at stake? Superhero films tend to glorify ability over altruism. That is after all the main reason why we flock to the genre, to see amazing sights never seen before. But one film is special in how it focuses on the gravity of selflessness in spite of such might. And it does so not by showcasing its hero's greatness, but his ordinariness. It's Sam Raimi's "Spider-Man 2."

The film chronicles the continuing burdens amassed by Peter Parker (Tobey Maguire) as he struggles with the responsibilities of his alter-ego. He has problems with income, is behind on his studies, and has to deal with the secrecy and guilt of the deaths he feels accountable for within his close-knit circle. Worst of all, he has to stay away from Mary Jane Watson (Kirsten Dunst) the love of his life, for the sake of her safety. And all of this just on his birthday.

This accumulation of personal crises then brings his body's betrayal, as he experiences frequent disruptions in his superhuman abilities. He begins to doubt himself and his cause, which is when the film introduces its Last Temptation of Christ moment of abandoning righteousness. 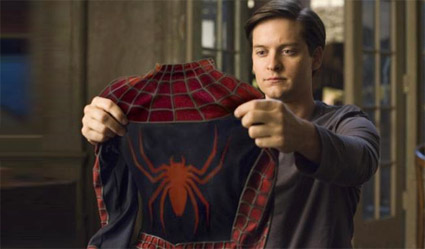 But after watching what Peter Parker puts himself through, who wouldn't want to give up the cross of being a hero? He isn't faster than a speeding bullet or more powerful than a locomotive. He doesn't have the Machiavellian strategy of Bruce Wayne or the know-how of Tony Stark. He has his whole life ahead of him, so why should he risk martyring himself for others?

Surprisingly, he gets his answer from his future nemesis. When Peter Parker meets Dr. Otto Octavius, he is put to task for being perceived to be brilliant but lazy. He is inspired not only by his elder's steely resolve, but also his warm sensitivity. This is no one-note mad scientist with lofty goals of domination. Both men share the noblest of intentions.

This good-heartedness only makes Otto's fall even more compelling, as we watch him lose his lifelong dreams in ways that make Parker's dilemma seem enviable. Dr. Octavius's tentacled instruments which were once under his mental control enslave him, leaving him with nothing but the mocking nickname of Doc Ock. And through Alfred Molina, he becomes one of the best and yet most underrated of movie monsters, a tragic figure helpless against forces beyond his control. His Doctor Octopus is the best "super villain" not played by Heath Ledger. 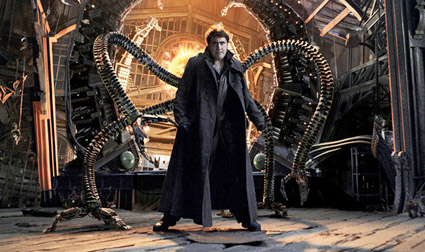 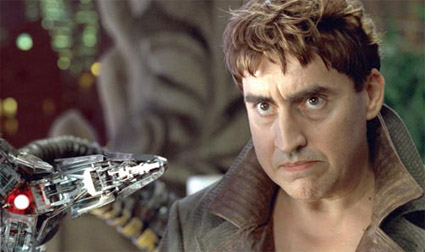 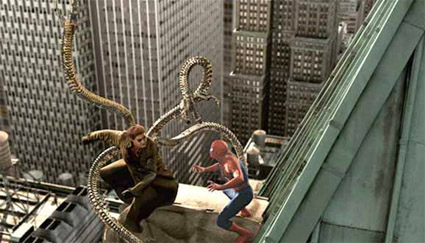 The film espouses these two polar forces, who share the common curse of having lost their dreams that both have sacrificed so much for. The protagonist has merely handled such bad luck better than the antagonist. Their battles feel titanic, not because of their super powers, but because we have become fully aware of their hardships behind their causes. Neither one really gains an edge, nor gives an inch.

With their conflict set in New York City, it is impossible to ignore how the film's setting and battleground evokes memories of September 11, which was merely a few years prior to the release of the film. Many may have forgotten, but heroism was not a word taken lightly in the period's aftermath. If "The Dark Knight" touched on the very grim fears of a post-9/11 zeitgeist, "Spider-Man 2" somehow glanced upon its hopes and wishes.

One can see this in Peter Parker's epic rescue of a runaway train filled with passengers. Rarely has a comic book character's heroic deed felt this thrilling, powerful, and touching before or since. It highlights what makes Spider-Man so special. When most superheroes fill the big screen as demigods, Tobey Maguire's Peter Parker always arrives as an everyman. Call it messianic. Call it empathic. But when the train's passengers lift him into safety, with one remarking how Spidey is, "Just a kid. No older than my son," it's a moment that ennobles everyone involved. Perhaps even us. It's a credit to how effortless Maguire embodies both naiveté and quiet strength.

Its contemporaries would do well to understand that not every superhero film needs to thrill us with a great champion or premise. "Spider-Man 2" is indeed amazing. A "Holy Trinity" member amongst superhero films. Not because of what its hero can do, but because it reminds in a marvelously entertaining way how very special heroism and sacrifice really is.