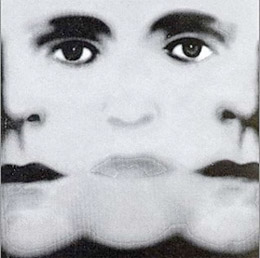 When Jeremy Irons won an Oscar for his icy but humorous performance in "Reversal of Fortune" (1990), he thanked David Cronenberg at the end of his acceptance speech. He had a very good reason; in Cronenberg's unforgettable medical drama "Dead Ringers" (1988), he gave a stunning performance, or a pair of stunning performances, as the peculiar but prodigious twin gynecologists who are threatened by real emotions and then plunged into the self-destructive chaos where the only exit for them may be becoming one again, as they were conceived at first in their mother's womb.

This film is available via Netflix mail, and streaming for $2.99 from Amazon Instant.

Doctors Elliot and Beverly Mantle already showed their brilliance even when they were just undergraduates in medical school. They devised a special retractor which would be the gold standard in their field, and they're now running a fertility clinic in Toronto with a considerable reputation among their peers and patients. On the professional level, they treat their patients well, but you may prefer a female gynecologist after watching this film. They are indeed professionals doing their work, but a man examining the internal parts of a woman's body is not a comfortable thing to watch for some people. 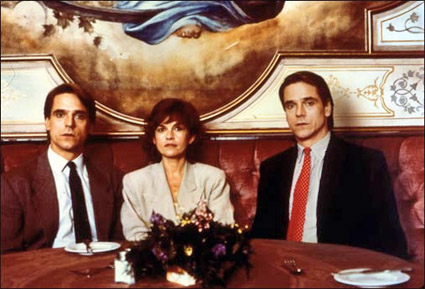 There is a more disturbing thing about the fabulous Mantle boys. They resemble each other so much that they frequently swap their identities and clinic work whenever needed, and they even share their women, most of whom are patients in the clinic. This strange relationship has been working well for them; Elliot, a dominant brother, publishes the valuable research done by an introverted brother Beverly, while Beverly sleeps with the women handed to him by Elliot.

This sounds a lot like those sordid stories usually decorating the front pages of gossip papers. You may not be surprised to know that the movie is based on Bari Wood and Jack Geasland's lurid fiction was inspired by the sensational real-life case of the Marcus brothers in Upper East Manhattan, who were also well-known twin gynecologists like the ones in the film before their decadent private life was exposed by a tragic incident. 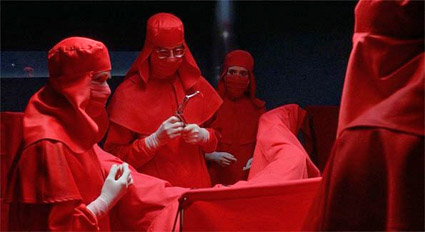 The movie is not a pleasant experience, but it is compelling to watch thanks to David Cronenberg's cold, clinical approach to the sensational aspects of the story. Unpleasant things like exploding heads can happen in his films, but he observes them with fascination and intelligence not that far from what I observed from my colleagues working at the biological science department. We keep watching those weird moments in his movies regardless of whether we love them or hate them in the end. I was one of the people who was left confounded by the messy goriness of "Videodrome" (1983), but I couldn't forget that bulging TV screen into which James Woods' character put his head, although it was regrettable that its rather prophetic idea was botched in the confusing plot. In the case of the surgery scenes in "Dead Ringers," I do not find the doctors wearing red clothes realistic (as some of you know, red colors can exhaust their eyes during long hours of surgery), but they are memorably creepy with a certain religious tone.

With considerable help from computer-controlled moving-matte photography (the movie was one of its first trials at that time), Jeremy Irons always makes the drama convincing with his masterful handling of the twin characters on the screen. There are subtle hints of the personality differences between them here and there in his performance, so you can always sense who is Elliot and who is Beverly even when they pretend to be each other. Irons also makes it sure that you can never be sure about where the line differentiating them exists in the overlapping area of their personalities, and that's why his performance has that uncanny quality sometimes observed from identical twins in real life; there are differences, but you cannot separate one from the other easily.

The ambiguity in their relationship becomes more unclear and chaotic while Irons and Cronenberg push them in opposite ways as the plot progresses. They are separate entities on the physical level, but can they be really separated from each other while maintaining their own individual identity? Even Elliot, who has always been the confident half, has some confusion about his identity. In the scene where he spends some private time the twin call girls, he instructs one girl to call him Elliot and then demands that the other girl call him Beverly. 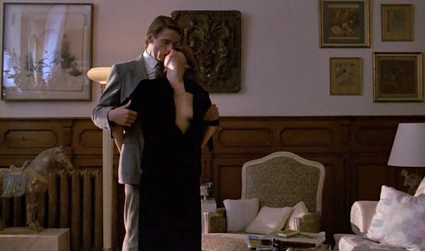 Elliot and Beverly have kept their relationship in equilibrium despite their confusion and doubt, but a major crisis comes upon them with their latest patient Claire Niveau (Geneviève Bujold), a movie actress who has been struggling to have a baby. While Elliot is excited by having a movie star as a patient to sleep with, Beverly is fascinated by encountering a curious case of rare deformity; she cannot get pregnant because she has a trifurcated cervix (it is not possible that she can have three babies at once because the sperm will lose its way in her womb).

Since they were very young, the Mantle brothers have always regarded sex and women in their analytic approach (in the odd opening scene, we see these brothers seriously discussing sex as little nine-year-old boys). In their view, their female patients are more or less objects to be examined and studied and sometimes, exploited, but Claire is a lot different from other patients - especially in Beverly's view. Although he is reluctant at first about his sexual relationship with her due to her kinky side, he comes to really like her, and that puts his brother as well as him in a very troublesome situation. Beverly does not want to share her with Elliot, but, as one terrible nightmare scene suggests, they are essentially psychological Siamese twins who are bonded together in their mutual mind far more strongly than they have ever thought.

Trying to resolve their difficult circumstances stuck in this triangle, the Mantle brothers find themselves slowly descend into the territory of twisted obsession and dark madness. While getting closer to her, Beverly gets addicted to the drugs abused by Claire, and he becomes delusional and paranoid when Claire is absent for a while due to her work outside Canada. Later in the story, he devises a new set of surgery instruments as a radical approach to his "mutant patients." You will probably not want to know what can be possibly done with these weird tools, which look a lot like torture instruments from the medieval era. They also remind me of those dreadful implements belonging to the sadistic dentist in "Little Shop of Horrors." 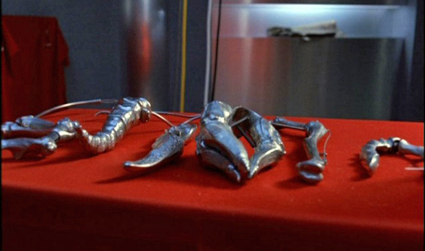 Elliot tries to get their situation under his control because his entire career depends on Beverly's work, but he is helplessly and willingly dragged to the medical condition of his brother, and that results in more chaos and insanity in their private lives. What eventually happens is a sad, desolate tragedy accompanied with a gloomy birthday party followed by a bloody ritual. Cronenberg has gained lots of notoriety through the gory special effects in his horror films, but in this case he thankfully leaves most of the gruesome details of this horrific scene to our imaginations, which are already fueled enough by the image of the grotesque surgery instruments ready for their first trial. Even one thin line of blood flowing below one character is enough to make you cringe, and Peter Suschitzky's cool cinematography and Howard Shore's mournful score make this tragic moment both terrifying and depressing.

With "The Dead Zone" (1983), "The Fly" (1986) and this film, Cronenberg began to depart from his previous B-horror films, and he moved to the next step of his illustrious career after this phase. His focus moves from physical horror associated with freakish events to psychological drama associated with the darkness of human mind, and I was not so surprised when he made a fairly conventional period drama "A Dangerous Method" (2011). After all, the bodies of the characters in his early works were the stages for their inner conflicts to be erupted, and a historical drama about Dr. Sigmund Freud and Dr. Carl Jung looks like a logical choice for Cronenberg's career.

While I find myself always drawn to "Dead Ringers" by its terrific technical aspects (I've watched it five times since 1998 through VHS, cable TV, and DVD), I also recognize several weaknesses in this coldly fascinating drama. A story like this really needs a woman's touch, and Geneviève Bujold, who was the beating heart of a sterilized medical thriller "Coma" (1978), gives a strong performance as the sole warm spot of the story. Though she feels humiliated to realize what's going on between her and the fabulous Mantle brothers, Claire really loves Beverly, and she is sincerely concerned about his fragility. But she's not a weak woman who will succumb to the twin's demands easily just because she loves one of them, and she makes her point clear to Elliot; she only wants Beverly, not Elliot. 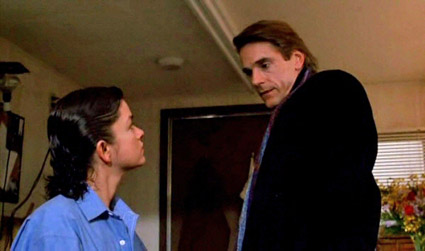 It's a shame that the movie mainly uses Bujold's character as a plot device during the second half. Considering how Geena Davis' performance as the lover of the doomed hero in "The Fly" (1986) was important in making its crisis and subsequent climax work with devastating dramatic effects, that's a big disappointment. The movie also never digs deep into an interesting contrast between Claire and Cary (Heidi Von Palleske), a fellow doctor who is officially Elliot's girlfriend but would not mind much about sleeping with Beverly. At least, von Palleske and Irons have a good scene where Cary dances together with the twins at their apartment while "In the Still of the Night" by the Five Satins is played.

Whether you like the movie or not, Jeremy Irons' tour-de-force performance in the film remains one of his great works. It has been the standard compared with the other memorable twin performances since the movie came out, and I instantly thought of his work when I saw Nicholas Cage in "Adaptation" (2002) or Edward Norton in "Leaves of Grass" (2009). 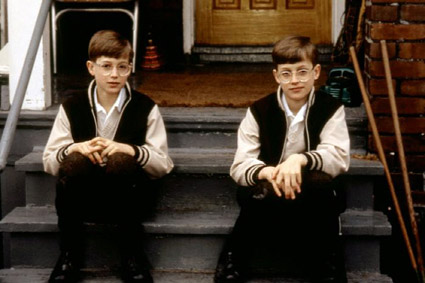 I don't think I love "Dead Ringers" wholeheartedly, but its creepy memory still sticks in my mind. I couldn't help think of its spooky poster showing overlapped faces when I saw one of the promotional posters for "A Dangerous Method," which also featured overlapped faces in an equally disturbing fashion. Did Cronenberg think of the Mantle brothers and Claire Niveau when he made that film which was about an intellectual triangle between three doctors? I have no idea, but the separation was more successful in "A Dangerous Method"-- and nobody died in that film despite some dire after-effects on the persons concerned.