“The Science Behind Pixar” Exhibit Explores the Physics in Animation

When you think of Pixar, you might not immediately think science. Yet a lot of math and physics goes into each Pixar film and that's what the interactive exhibit "The Science Behind Pixar" is all about. The exhibit originally opened in Boston at the Museum of Science in June of 2015 and then stopped in Philadelphia at The Franklin Institute. "The Science Behind Pixar" is currently in Los Angeles at the California Science Center until April 9, 2017.

Behind the scenes at the Emeryville, California-based Pixar, various teams have used algebra, trigonometry, geometry, calculus and physics for 30 years to resolve 3D computer animation problems in features ranging from 1995's “Toy Story” to the recent “Finding Dory.” According to Tony DeRose, senior scientist at Pixar and Research Group Lead, a team of six to seven Ph.D.-level scientists continue to develop new techniques for future films.

In the 2012 Disney-Pixar feature "Brave," the spirited Scottish princess Merida had expressive masses of wild corkscrew curling red hair. The exhibit's "Pixar's Simulation Challenge" explains the problem and the solution for animating each tress. Merida has more than 1,500 individually sculpted, curly red strands that generate about 111,700 total hairs. That simulation is Pixar VP of Production Thomas Porter's favorite part of the exhibit. “Springs are an introductory physics problem,” he explained.

Porter was part of the original group computer tech group at Lucasfilm’s Computer Division that eventually left and formed Pixar. As part of different Pixar teams, Porter shares three Academy Awards for Scientific and Engineering: for developing RenderMan software in 1993, for more pioneering inventions in digital image compositing in 1996 and for pioneering efforts in the development of digital paint systems used in motion picture productions in 1998. 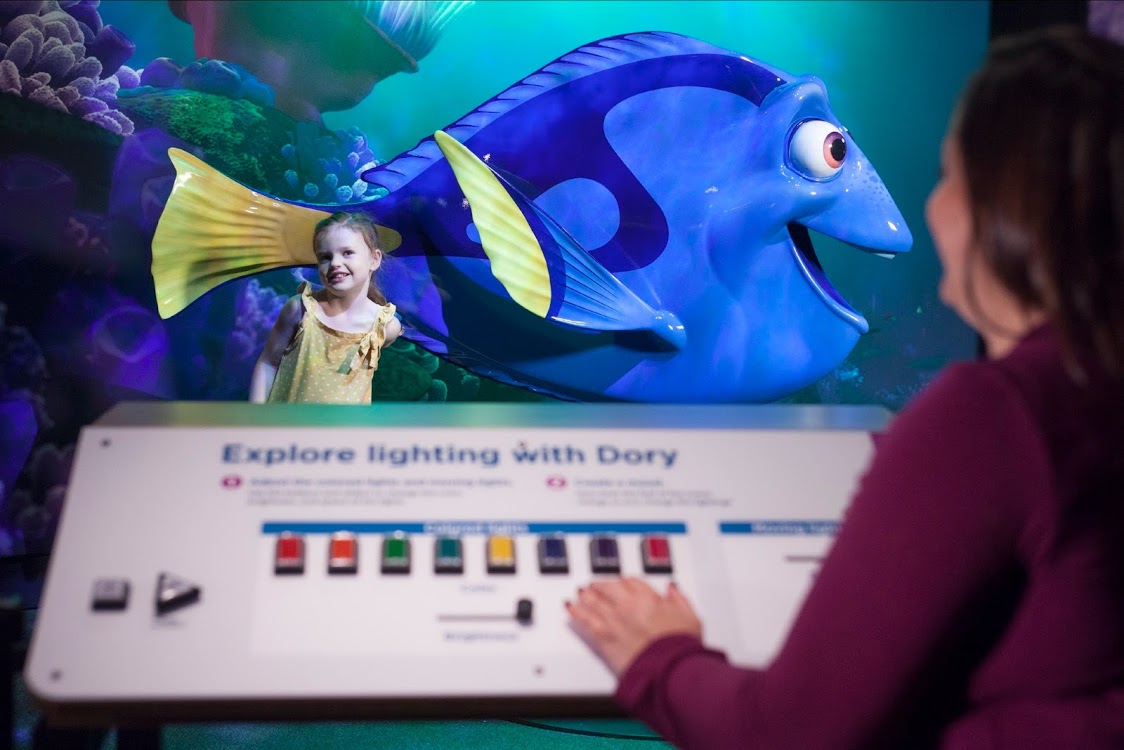 Something as simple as making grass in a field requires mathematical calculations. A simulation from “A Bug’s Life” shows how a blade of grass (a parabola) is made and replicated. Then a few alterations can result in a different scene and mood. The exhibit also includes simulations of mood lighting in a room or, as in the case of "Finding Dory," underwater. DeRose’s favorite simulation in this exhibit shows how changing variables can alter the behavior of schools of fish swimming.

DeRose got his BS in physics from UC, Davis and then received his Ph.D. in computer science from UC Berkeley. If you want to excite kids about the potential of science, he recommends coming to the exhibit where Pixar is "really trying to pull back the covers on different creative challenges."

DeRose was one of the two science advisers from Pixar for this exhibit. "We don't know how to design museum museum exhibits. They (Boston’s Museum of Science) knew how to deliver ideas and concepts in a way that would be engaging to visitors." He's really proud of the high quality of the interactions, and that science and math are explained in a way "that is really accessible." He commented, "It's all authentic, not dumbed down."

Each Pixar movie has a challenge. "In the early films, there were lots of challenges. I started around the time of 'A Bug's Life' and 'Monster's Inc.'" DeRose explained. "We didn't know how to tell a story with humans. The humans in 'Toy Story' weren't nearly as effective on screen as the toys. The skin didn't look right. We had to develop the technology to make skin soft and squishy." DeRose added, "You might have noticed that more recently, the imagery that we're creating is warmer, more subtle, more organic, more believable." What changed is that the scientists of Pixar gained an understanding how light bounces around in the environment.

Other challenges come up unexpectedly. Lindsey Collins, producer of "Finding Dory” and VP of Development, doesn’t come from a technical background. Her experience had been with more traditional animation. She laughed recalling that she originally thought a rendering farm was like a petting zoo instead of a place where computers process computer generated imagery. (According to the press notes it took almost two weeks to render the most complicated shot on "The Incredibles.")

With “Finding Dory,” she “naively said there’s going to be an octopus. Literally, everyone went pale. They immediately knew” this would be one of the “most complex animation rigs to come up with” because the creature has no skeleton. As the software people developed the character, they came back and asked just how sure she was that this octopus would be in the film. Some characters get cut before the final movie such as Jack the Ankylosaurus that didn’t make it into “The Good Dinosaur.”

Of course, fans of “Finding Dory” know that the “septopus” Hank, did make it into the movie. Collins recalled how animators and technical people inspired each other along the way. Someone mentioned this is how Hank would look climbing the monkey bars, that idea caught on and was added into the script. Hank got to be a bigger and bigger part of the story. But Hank had an additional problem: How to give Hank “expressiveness without a nose, without a mouth," Collins explained. That meant the “facial” muscles needed to be more human-like so the audience could relate to Hank as in the initial scenes when Hank’s face and body are partially obscured as he hides in the sink. 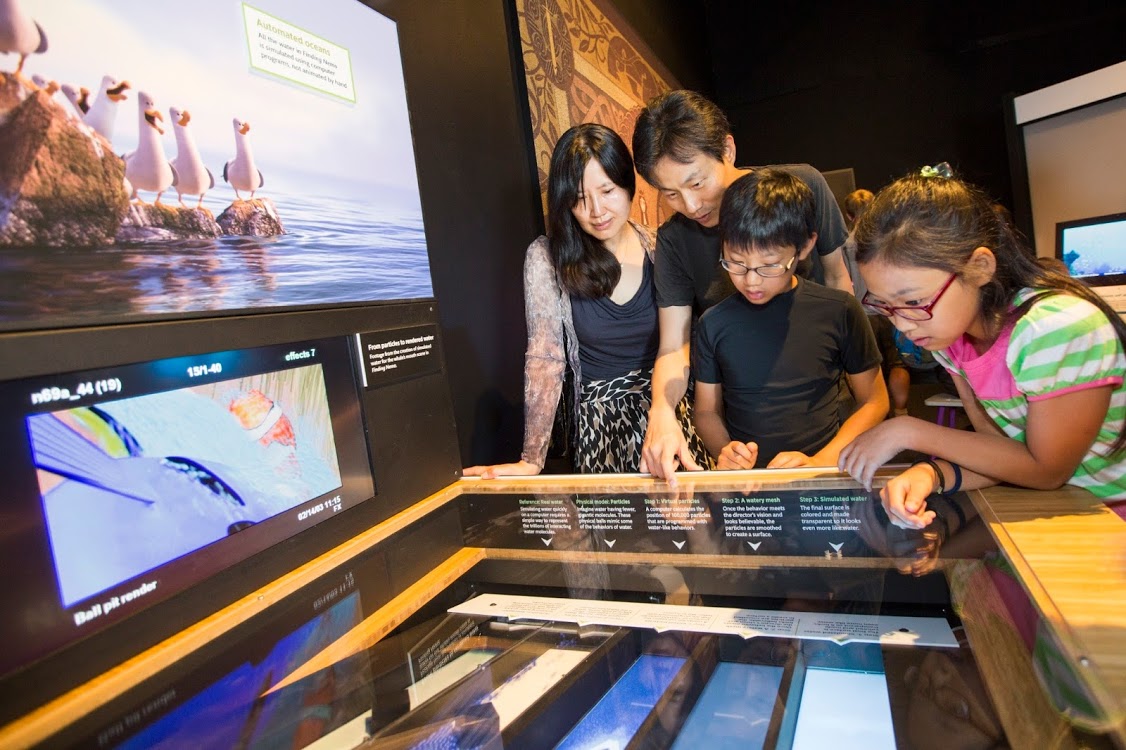 Collins had not been directly involved in the making of the exhibit. “I've been aware of it and seeing it come together from afar,” she said, but the day before the Los Angeles press view was her first opportunity to walk through it. “It’s compelling to move the knobs and see how this pretty heavy technical job is translatable” and she stated some displays helped her better understand the science and complex math that her team had previously explained to her.

Like Collins, not everyone on a Pixar movie is a scientist. The exhibit includes interviews with people from diverse backgrounds—music, painting, fine arts sculpting backgrounds, etc. Collins’ advice to people interested in working in computer animation: “Ask tons of questions. I think it’s really important for kids to be unabashedly curious.”

The research teams continue to ask questions, some they only partially answered before. DeRose noted one of the problems his team is working on includes simulating water on a small scale, like wine in a cup. “Currently, we tend to lose volume as the simulation runs. The simulation is not conserving volume. You don’t notice it if you have large scale simulations.” That was problematic on “The Good Dinosaur.” Pixar “could not use the same simulation for the whole massive river and for the close-up shots.”

Even when solutions are found, not all simulations remain true to the facts of physics. “Science is a series of approximations. In math, there are beautiful well-understood proofs that will always be true.” That’s not so in science and even less so in computer animation where DeRose noted, “Physics, for us, is a starting point for building software that artists can use to build that on the screen.” The world as we see it results from an infinite number of bounces of light, but a director may only really need a few.

Sometimes, changes will be made in a simulation. As an example, DeRose explained, “If a shadow is falling in the wrong place, you could move the light source to fall in a place that the director likes more but that's going to change a lot of other stuff. A lot of times, we'll just change the simulation so that the shadow moves so basically the rays aren't falling in straight lines any more.” In animation, “we don't have to stay faithful to physics.”

Want to inspire children to learn STEM with animation? DeRose said, “I'm a big fan of project-based learning. Formulate it as tangible goals that the director's asking you to do, start to break it down into derivatives. From the derivatives, kids can see how the concepts are used, how the concepts are discovered.” DeRose feels the real fun in working at Pixar is figuring out how to use math and science to resolve problems.

Porter, recalled how in working on surface appearances for “Toy Story,” he came to realize that the bumpiness on Mr. Potato Head was “basic sine and cosine functions that you learn in 11th grade.” He exclaimed, “It’s delightful to me to think here I was in a job in 1992 that people couldn't even conceive of back in the mid-60s that was completely relevant to what I was learning in 11th grade.” He was also sure that high school math and physics would eventually be used for “some job that you or I can't conceive of now.”

For Porter, “Toy Story” remains his sentimental favorite Pixar movie. DeRose’s favorite Pixar film is "The Incredibles" and his favorite character is Bob. "I'm a real fan of James Bond movies and it kind of plays like James Bond. And I kind of sympathize with Bob being a middle-aged dad.”

If you can’t make it to this exhibit, or if you find your curiosity piqued and want to learn more, Porter and DeRose both recommended another resource: Khan Academy. Pixar and the academy created Pixar in a Box, a series of lessons on various aspects of computer animation. DeRose said it’s about “18 hours of learning that helps kids make that connection between how you make digital films and what that science content is.”

“The Science Behind Pixar” is a ticketed event at the California Science Center until April 9, 2017. St. Paul's Science Museum of Minnesota is the next scheduled stop, opening on May 27, 2017 and closing on Sept. 4, 2017. For more information about the exhibit, click here.