The offer we cannot refuse 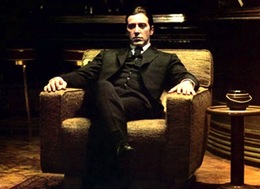 Behind every great fortune there is a crime. - Balzac

So states the prologue of Mario Puzo's novel, "The Godfather," a debatable statement that rings true nonetheless. It certainly feels like "the truth" after visiting this world. Does it mean that the Corleone family was completely amoral? Not at all, and that is what separates this material from just about every previous gangster film. This family provided justice and protection to those who couldn't get it elsewhere. They also gave them gambling, women and liquor--but heck, they did draw a line at drugs. If there is one thing that Mario Puzo and Francis Ford Coppola evidently were clear about, it's that black or white characters aren't particularly exciting.

The phenomenal success of the Godfather Trilogy can basically be attributed to the decision on the part of Paramount executives to put their helm in the hands of a master filmmaker at his very peak who also happened to be one of the few raised in a family with the precise sensibilities required to take the material from Mario Puzo's best-selling novel and make it feel absolutely real.

It is precisely in the small details that these films transcended from the "merely great" to the sublime: details like the characters discussing business during their most important family celebrations; the powerful title character playing with his cat while tending to a tragic request; the terrifying enforcer giving a mumbled speech to his boss while being interrupted by the play of little grandchildren; the annoyed sign painter outside Genco Olive Oil, upset at the nervous house tenant who won't let him do his job properly. These are just a few examples but one could go on forever. For audiences who had never actually met people like them, these elements felt right.

Coppola had the vision (and persistence) to cast this handful of film masterpieces which would have never been the same with any other actors, no matter how talented. He also made it just about impossible for audiences not to identify with them. How many film goers can claim they know Vito, Sonny, Fredo, Michael, Tom and Connie better than a lot of their own relatives?

The central theme in the Godfather trilogy is the life of Vito and Michael Corleone, men of extraordinary intelligence who faced their own similar and pivotal moments in life in which both chose the road of violence as the best way to protect and provide for their families, only to later realize that leaving such world is not as easy as entering it (think: "just when I thought I was out!"). Both were faithful to their wives in every circumstance and held their families above everything, even taking unfortunate strangers in, at their most desperate hour (see Hagen). It's safe to say that had they been born into a family under different circumstances, both would have become men of good. 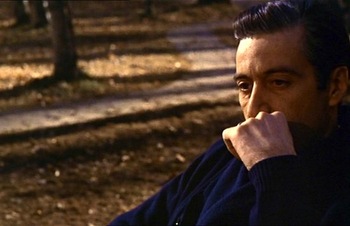 From an early age and in every step of his life, Vito had to live with the constant presence of organized crime, from the loss of his family and home at an early age to the loss of a legitimate job early in his marriage, and then to extortion to surrender a big part of his earnings in the not so legitimate one: it was here that Vito had to decide between getting rid of the enforcer Fanucci or being a subordinate the rest of his life: the resulting decision ended up paving the way for the surge of one of the most powerful mob families in the country.

It was only natural for one of his three boys to eventually follow him in the family business but the oldest is killed, the next one is clearly not fit for this (or almost any other) position, and the youngest, Michael, had repeatedly stated he didn't want anything to do with the family business (nor would Vito like him to)--that is, until faith and circumstance bring his own moment of truth along. Forgetting for a moment the moral repercussions of wiping out all of your opponents, one can understand the logic behind Michael's thinking: it clearly was becoming impossible to keep co-existing with the Barzini and Tattaglia families; the real issue was that Michael ended up falling in love with murder as a solution to all his problems, making us realize that he wasn't the outsider to the family that he always claimed to be, that he actually had it in him the whole time. 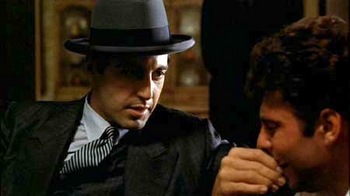 I found it curious years ago to learn about Coppola's expressed distaste for film violence, considering that he's so very good at portraying it in his own films. It is the little touches that make violent scenes here special: the camaraderie prior to Paulie's execution; the malfunctioning light bulb in Fanucci's building; the ducking toll-booth collector and Sonny; Don Ciccio's hearing problems while listening to "Antonio Andolini"; that very important part of the "Hail Mary" which Fredo doesn't get to say on-screen.

In the second film we find Michael trying to outwit the two main two suspects of his assassination attempt, confronting them behind their backs in order to find out who the real culprit was, only to inadvertently learn of the most painful involvement of his brother in this plot. It is here and in a very short period of time that Michael becomes aware of this betrayal, his wife Kay aborts a much awaited baby, and their marriage breaks down while the feds are closing in. It is a perfect storm which makes him feel as if his sacrifices were for nothing, effectively turning him into a bitter, paranoid man. That's bad news for everyone surrounding him, especially poor hapless Fredo. Michael spent so many years and effort "trying to think like those around you think," obsessing about who was still loyal, who wasn't anymore, that he simply never saw these betrayals coming from so close within. 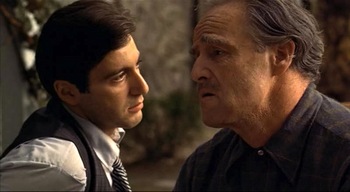 A good way to comprehend the difference part I's Michael and part II's is their interrogation scenes at the end of each film, the first one designed by a perfectly-in-control Michael to extract the truth from his brother-in-law Carlo in order to justify his murder, the second a paranoiac effort to make Tom Hagen, his most loyal companion, confess to something, simply because he might have possibly considered doing it. It was Coppola's personal decision to have Michael order the death of his brother, much to the dismay of just about everyone involved in the production and as such he has to be commended for what has to be considered one of the gutsiest decisions by a filmmaker in movie history.

Just try to imagine Bogart ordering the death of Renault in "Casablanca" or even Rhett doing away with Scarlett. Here was something Hollywood had rarely done before, surely not in this scale. What audience could possibly identify with Michael now? Who was there left to root for? Coppola may have chosen this solution as a way to avoid his critics' continuous claims that he glamorized organized crime, but whatever the case, it turned out to be a milestone decision which only served to give the series a whole new dimension. It is now impossible to imagine a better ending for "Godfather I" than Michael alone in absolute silence, his eyes wondering, a tragic and lost figure. 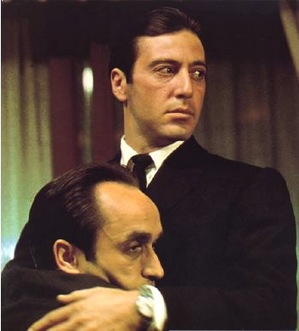 It's interesting how Puzo's novel has the character of Kay converting to Catholicism, going to mass every day and lighting candles for Michael's soul following her mother-in-law's example (Coppola actually considered this for the film, as it exists in the form of a deleted scene). You could say she turned into a younger version of Mama Corleone who would serve the food silently (and with a deaf ear) while the men discussed the business in hand. Instead, Coppola ended up using the character of Kay in the films as a way to attest how times had changed, and kept her as the outsider willing to resort to actions Michael never even considered possible. How Don Vito would have dealt with such a situation in his time is impossible to even imagine.

After years of bizarre casting rumors (Travolta, Stallone), Part III finally came out some 16 years later. Having run of out material from the original source, Puzo and Coppola wrote a completely new treatment which dealt with Michael trying to leave organized crime and redeem himself, all with tragic results. I've discussed this film before in more detail but I find worth adding how the studio forced the film to be ready by the end of 1990 strictly for internal business reasons. As a result, Part III ended up feeling like it was done in a hurry and certainly with a lesser cast than the first two (despite the fine additions of Garcia and Wallach). That Coppola was still able to come up with an overall good film (with some truly magnificent scenes) speaks volumes about his abilities. Still, dealing with the hyper-expectations of audiences isn't ever easy and it can be said that Part III is seen by Godfather fans much like the Star Wars prequels are by those of Star Wars fans.

The Godfather Trilogy cannot be considered a realistic depiction of organized crime; for that we have films like "Goodfellas" which grew in part from Scorsese's own life experiences and acquaintances. Puzo wrote his novel entirely from research and it was Coppola who saw the possibilities of turning the story of the Corlene family into a metaphor for capitalism in America. What can indeed be said for sure is that "The Godfather" does represent the ultimate version of the American dream gone wrong, in a land of many types of opportunity.