In the wake of the disappointing "Shutter Island," it's especially gratifying to look back at Christopher Nolan's feature film "Memento" (2001), an indie mystery starring Guy Pearce as a San Francisco man in Los Angeles suffering from anterograde amnesia, or short-term memory loss.

Within seconds Leonard Shelby can't keep a thought in his head, the same way one with a bad digestive tract can't hold down food. Memory evaporates like cotton candy.

To retain a semblance of memory, Leonard scribbles notes constantly, checking the tattoos that cover his body for the faintest sign of recognition of his life. "Memento" certainly isn't a comedy like "The Hangover"; it's an entertaining meditation of the lead character's visual and psychological discombobulating. "Memento" is often filmmaking accomplished on a genius level.

In this landscape of earth tones and blues, we know that at least one person has been killed. Polaroid snapshots are significant markers in a film where every image, especially the previous one, counts.

Told -- or more precisely presented -- in reverse chronological order, "Memento" is a construction of two stories; one shot in color in the "present" world in which Leonard is surrounded by the people in his life, and the other a timeless black and white documentary-like story of an isolated Leonard anguished by lack of memory and haunted by fear and anxiety. Each scene is an episode flipped backwards, so that by the time the scene concludes we progress closer to the beginning of the story. As written by Mr. Nolan and based on his brother Jonathan's original short story "Memento Mori," the film makes its audience work while entertaining and enveloping it in its intricacies. 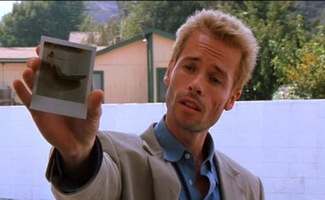 "Memento" was shot in just over three weeks in and around Los Angeles in 1999. Mr. Nolan's drama is ironic, comedic and violent, but every act is vital to completing a cinematic jigsaw puzzle of who you can and cannot trust. The very sentence you are reading right now may confuse: "Memento" as a film is a theater of manipulation but the devices engineered to conceive the effect of the film aren't necessarily manipulative in and of themselves. Dody Dorn's phenomenal editing is the film's greatest strength. Many visual clues fuel this noir-like drama and the clever, cheeky dialogue in Mr. Nolan's screenplay present an abundance of them. On second viewing the clues are glaring. You wonder how on earth you missed them the first time.

There's a playful déjà vu that pulses throughout "Memento" and on a lesser level a subtle commentary on Los Angeles and its more opportunistic denizens, such as a hotel operator, who tells Leonard about something he did. The recounting of the deed will bring laughs; such is the wry humor that underlines the film. For all its weightiness, "Memento" doesn't consume itself with melancholy, even if it takes itself seriously. The film's music score (David Julyan) evokes a somber undercurrent but acts as a subterranean voice of conscience accompanying Leonard throughout. On occasion the score's synthesized notes play like subliminal blips of Leonard's defragmented mind, as he struggles to make sense of things. Mr. Julyan's score faintly echoes such movie scores as "Blade Runner," composed by Vangelis, who also created the score for "Chariots of Fire." Mr. Julyan also scored Mr. Nolan's debut feature film "Following" (1998). 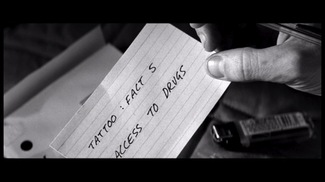 The film, its lead character and the director are never a step ahead of the audience. We wonder as Leonard wonders. We are puzzled, confounded and intrigued. Who are the people we see? Are they props? Are they figments of the protagonist's imagination? Are they manipulators? And who exactly is Leonard talking to on the phone? This last question is as vexing as: what was in the suitcase emitting the rich golden glow in "Pulp Fiction"?

Leonard is excellently portrayed by Guy Pearce, who was seen in the 2009 films "The Hurt Locker" and "The Road." In "Memento" Mr. Pearce looks like David Bowie did in his 1983 music video "Let's Dance," with a very similar blond hairstyle and angular features. Mr. Bowie's music video was shot in Australia, and Mr. Pearce, who was born in England, was raised in Australia from age three. Perhaps it is more than mere coincidence that Mr. Bowie's song "Something in the Air" plays over the end credits of "Memento."

"Memento" cinematographer and frequent Nolan collaborator Wally Pfister decorates the film in shades of blue and the photography is often visually arresting. Blue is an essential element, consistently tied to Leonard's perspectives on life. Blue is associated with cool, sadness and truth. In the story shot in color virtually every frame with Leonard in it has a tinge of blue, right down to Mr. Pearce's blue eyes.

The story Mr. Pfister shot in color represents the realm in which facts are either deduced or discovered. The story shot in black and white represents opinion and conjecture that are obviously subjective and uncontested, yet sometimes shot in with an objective point of view. 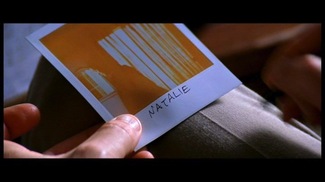 Though Leonard occupies much of Mr. Nolan's film, there are two other important players in "Memento." One is Joe Pantoliano, who plays Teddy, an undercover police officer trying to shepherd Leonard through his identity crisis. The other is Carrie-Anne Moss as Natalie, a bartender who also tries to assist Leonard through his ordeal. Both are very good, and their characters keep the proceedings interesting. Teddy and Natalie are mysterious beings.

Just as mysterious is the amazing two-disc DVD limited edition of "Memento," released in 2002 in the U.S. The limited edition box is presented as a clipboard psychiatric file application/report on Leonard. Wrapped in a light blue, teal-like color, the package is supplemented with handwritten notes and charts. The original theatrical R-rated release is on disc one, with Mr. Nolan's audio commentary, which briefly begins with a backwards, sped-up voice before we eventually hear Mr. Nolan talking. All of this however, is not before having to endure a frustrating test in which you have to identify and remember words that flash furiously before you on the screen. The words are then presented in rows. (To see the film, select the word "watch".) 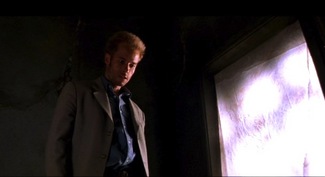 Disc two is the goldmine for "Memento" fanatics. There's the director's shooting script, trailers, Jonathan Nolan's original story, and among other features, a special "Easter egg" surprise, which allows you to watch "Memento" in chronological order, starting with much of the black and white story. To access it you will need to select the clock from the group of two dozen objects. The letter C should be selected as the option for five successive questions. A set of four comic strip-like drawings of a woman with her car will appear. You are asked to rearrange them in the correct order. (The correct sequence is pictures 3, 4, 1 and 2.) The film then plays in chronological order, cheekily beginning with a manipulation of the end credits. Jason Bovberg of DVD Talk presents a helpful, detailed explanation of how to access all the features on both discs in his 2003 article about the limited edition 2-disc DVD edition.

Overall, Christopher Nolan's work chronicles isolation, duality, perception and the realm of senses. All three of these are at play in "Memento". The film is his best cinematic representation of this troika of characteristics, each of which is in constant tension with the other. Leonard grapples with them, and the film's precision and tone beautifully enhance Leonard's search for truth and meaning.

In the director's other works, such as his debut film "Following," isolation and anti-social characteristics form one man's search for connection as he randomly follows complete strangers for research on his novel. In Mr. Nolan's "Insomnia" (2002), the remake of the 1997 Norwegian film, Al Pacino is consumed by both a lack of sleep and a permanent daylight in Alaska, both deeply affecting his perception. In "Batman Begins" (2005), there's isolation, duality and the evolution of a man's single-minded quest to avenge the death of his parents. In "The Prestige" (2006), male rivals tangle in a game of one-upmanship and illusion. In "The Dark Knight" (2008), Gotham's lonely caped crusader was crime-fighter-in-crisis, overmatched by a public's expectations and perceptions of a hero, as well as wily villainy.

"Memento," the best work of Mr. Nolan's career, was released by Newmarket Films in 2001 and went on to gross about $40 million worldwide. In the intervening years, the film has gained huge admiration. For those who haven't seen it, "Memento" is a highly recommended mindbender.