The men who pushed Humpty Dumpty 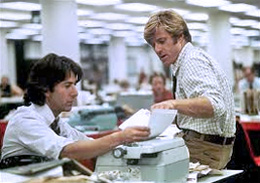 I'm not naive enough to believe that, at some point in history, the media political coverage (national or international) was in fact absolutely impartial. After all, controlling the typewriter and, later, computer keyboards were human beings with their own passions and ideologies - and it is clear that, even if they tried to be objective (those who tried, at least), they couldn't avoid filtering one fact or another by following their particular beliefs. Unfortunately, even though that occurs, I doubt that the level of indoctrination exhibited by professional journalism in History reached the alarming level of proselytism we have witnessed in recent years: while in United States 9/11 turned the media into a spokesperson of Bush's government, allowing him to lead the country to a war based on lies (something that many realized only a while ago), in Brazil large "journalistic" vehicles clearly embraced right-wing candidates during recent elections with no attempt whatsoever of masking their partisanship.

This destruction of the credibility of the so-called "Fourth Estate" represents one of the many factors that contribute to "All the President's Men" (1976), directed by Alan J. Pakula - a film that remains relevant and current even though it tells a remarkable and historical incident: the investigation conducted by The Washington Post's journalists Carl Bernstein and Bob Woodward that led to Richard Nixon resignation. In an explosive politic climate, the reporters and their editors never discuss their ideologies, dedicating themselves exclusively to the accurate research of the facts - and even though chief-editor Benjamin Bradlee has a picture of Kennedy in his office and Woodward is a registered Republican (a revelation that shocks his partner), the Truth seems to be the only thing that really matters to the newspaper - and they certainly would have avoided a lot of headaches if they had just dropped the matter. 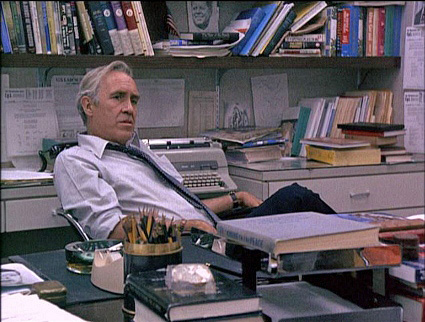 Beginning the narrative with the notorious invasion to the Democrat's office in the Watergate hotel (a sequence that features night guard Frank Willis playing himself), the beautiful screenplay written by William Goldman from the book by Bernstein and Woodward soon explains how the latter, a reporter who used to write about crimes, got involved in an investigation more suited to a Politics reporter: surprised after realizing that the "burglars" were carrying a large amount of money and had expensive lawyers, Woodward immediately smells a bigger story behind the incident - and it is almost by accident that he starts being assisted by Bernstein, who, although very close to being fired, had enough sources to become essential to the investigation. Still, it's admirable that two relatively inexperienced journalists would be able to turn Nixon into the only American President to resign (aided, obviously, by the mysterious informant "Deep Throat", who directed the reporters to the correct targets with his notorious advice that they should "follow the money" and whose identity was kept in secret for over 30 years, only being exposed in 2005 as William Mark Felt, who was then FBI's "adjunct-director"). 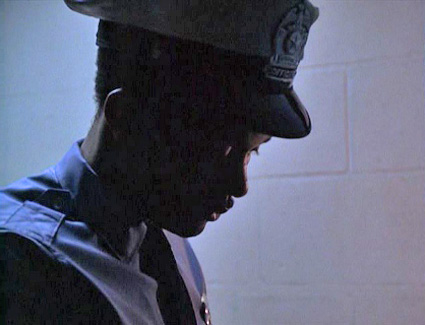 Without the benefits of historical distance, All the President's Men was shot only four years after the Watergate scandal and under a intense political atmosphere. Made possible mainly thanks to the influence of Robert Redford (who for this reason, in a very rare case, appears next to the director's name during the credit "A film by"), the movie has an extremely complex narrative, since it presents the spectator to dozens of important characters and a multitude of facts gradually collected by the two journalists from numerous sources - and all with a stunning clarity: at the end of the movie, we may not remember details of the trajectory, but we perfectly understand how Woodward and Bernstein reached their conclusions. 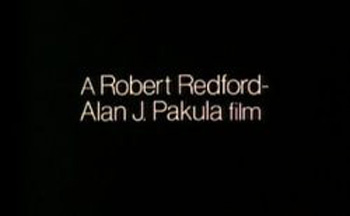 Considered one of the movies that better show the everyday life of a big newsroom, All the President's Men perfectly illustrates the pleasure experienced by those professionals while competently doing a challenging work, but also the strenuous nature of their task: while interviewing someone, Woodward (Redford) doesn't hesitate to make tough questions and doesn't allow himself to be pushed away easily, insisting in his questions and poking weak spots of his sources in order to reach the facts, even waiting patiently for several boring hours just to exchange a few words with a possible informant. Likewise, Bernstein (Hoffman) can be continuously seen on the phone - and when a new name is mentioned, his notebook already full of dates, names and data stuns us. And if the spectacular editing of Robert L. Wolfe perfectly mirrors the frustration of trying to get new information during the sequence in which we see the protagonists having many doors slammed on their faces, the duo's persistence is also shown during the scene in which Woodward, trying to find out anything about a potentially important name he knows nothing about, searches phone books of dozens of cities to look for an address. But that's not all: fully aware that the writing of the articles is also important to the process, the movie shows a conversation in which Bernstein advises his colleague to restructure the piece, showcasing important information in the first paragraph in order to emphasize it. 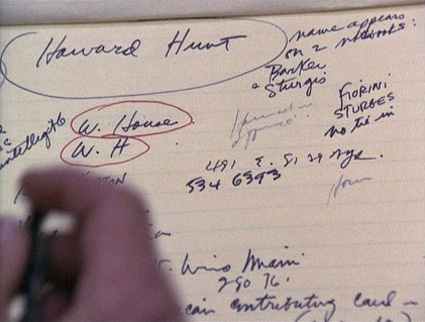 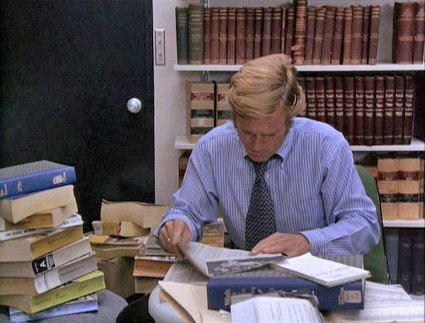 Trying to add even more verisimilitude to the story, director Alan J. Pakula does here the best job of his irregular career, creating long shots that limit themselves to observe the characters' actions in the newsroom, including traveling shots that traverse the space with the journalists while the deafening sound of typewriters in the background composes the scenario. A particularly notable shot is the one that shows Bernstein while he tries to get information from a librarian by phone and that includes a long pause during which the woman becomes silent - something essential for us to realize that those few seconds were enough for a superior to order her to keep quiet. Moreover, Pakula is able to build a growing atmosphere of tension as the characters realize the frightening dimension of the conspiracy they are exposing.

Another right choice from the filmmaker lies in the efficient use of locations, such as in the scene that takes place in a balcony and shows Washington on the background or the one that, in a stunning high angle, reveals the interior of the Congress' Library - and the garage in which Woodward has his meetings with "Deep Throat" also merits mentions because of its fantastic use of shadows. By the way, all of the production design of "The Washington Post" is fabulous (and, as I said before, it's thoroughly explored by Pakula's travelling shots) and demonstrates huge attention to details, such as the stains on Bernstein's typewriter to the bicycle wheel located next to his desk and that helps to establish the character as an unconventional person in that place. 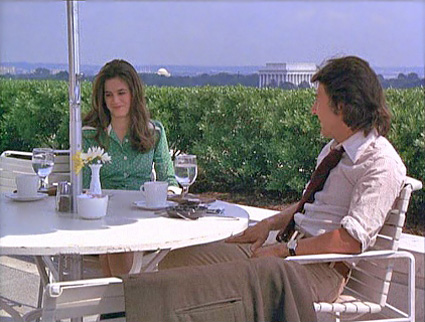 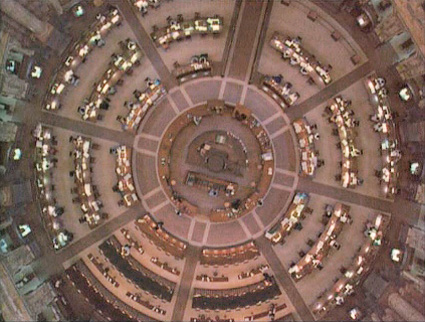 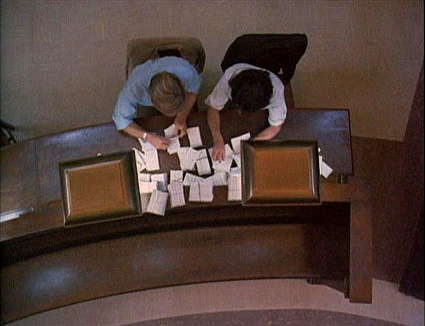 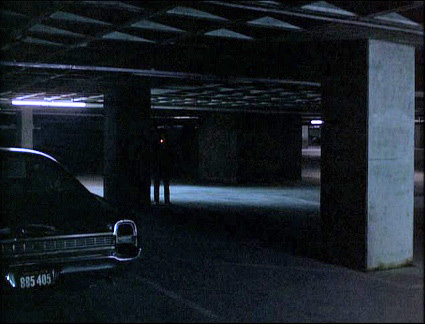 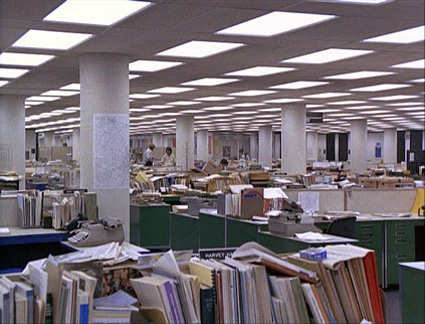 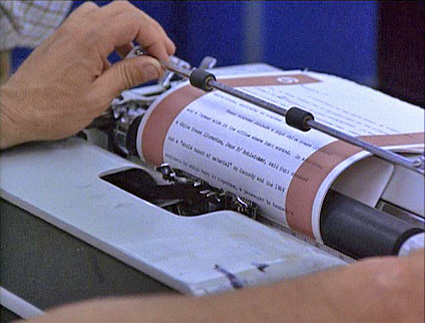 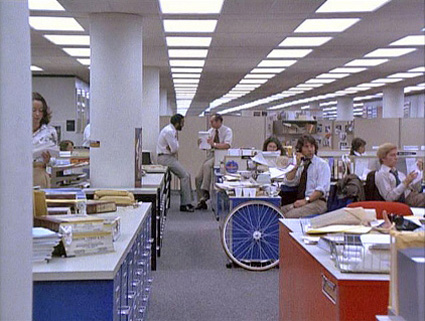 The challenge faced by Hoffman and Redford in this production, it is worth to notice, is huge, since the personal lives of their characters never get in the equation: what matters to the movie is the professional side of Bernstein and Woodward and, thus, the only clues we have about their personalities lie on small details of their performances. If you notice, for example, how Bernstein always walks fast, keeping ahead of Woodward, you will immediately realize that Bernstein is the more flustered and anxious of the two - something we can confirm during the subtle moments when Woodward quickly cleans cigarette ashes his partner has dropped on the couch of an informant. The same way, while Bernstein shows almost no hesitation in pressuring his sources, his colleague is always more cautious and even respectful - and the perfect dynamic established by these differences between the two journalists can be seen when they exchange observations and even simulate discussions in front of the person they're interviewing in order to extract more information. 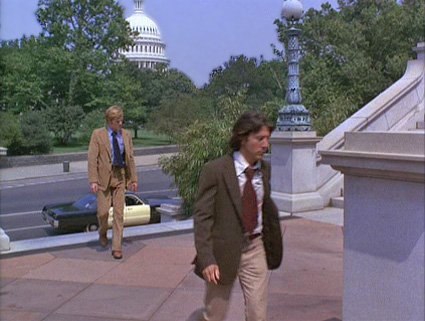 More important than that, however, is the fact that both actors get to create incredibly realistic portraits of what means to be a good journalist: Woodward, for example, has the habit of asking everything that comes to his mind, even if it seems irrelevant (like when he asks if the house that a informant has in Florida is in Boca Ratón), and, on the other hand, Bernstein's ability to obtain new sources is illustrated in the scene when he visits a woman who doesn't want to give any information and he gradually gets her to talk - and when she realizes what's happening, the reporter is already taking notes (by the way, actress Jane Alexander was nominated by the Academy for Best Supporting Actress basically because of her work in this scene). Meanwhile, Jason Robards portrays The Washington Posts' chief-editor, Benjamin Bradlee, as a true hero by making him the kind of professional that all media vehicles should have in charge: when Bradlee has any doubt about the veracity of information given by reporters, he doesn't hesitate to stop its publication (encouraging them to solidity their work) and when he trusts what he reads, he obviously feels satisfaction in guiding his subordinates towards perfection, cutting and rewriting sentences, making observations about the structure of the story and making it more coherent. And it is for this reason - and not because of arrogance or political interests, that he feels safe enough to support his staff in the face of pressure made by powerful people. 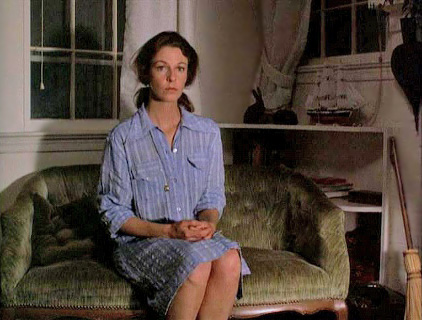 And that should be the core of the Journalism: the certainty of publishing something factually correct instead of making the effort to fit the truth to political interests of editors and publication's owners. The press' investigative nature also results in a supervisory role - but, for this, the credibility of the vehicle must be pristine; the reader must be sure he's reading an accurate article and not a fiction "inspired by real facts". If it's a fact that "with great power comes great responsibility" (a sentence immortalized by Stan Lee when creating Spider-Man and that was inspired by another one uttered by Winston Churchill), this is particularly true when we discuss a Fourth Estate that's commanded by dozens of people with their own interests - and the media's influence is symbolized by two magnificent shots in All the President's Men when we see Woodward writing on the background while, on the foreground, a TV shows the real repercussions that the words of the journalist will have all over the world (and it's not an accident that Pakula adds gunfire and cannons sounds while we see the words appearing on a typewriter and on the cablegram that closes the movie, such was the weight that those sentences carried). 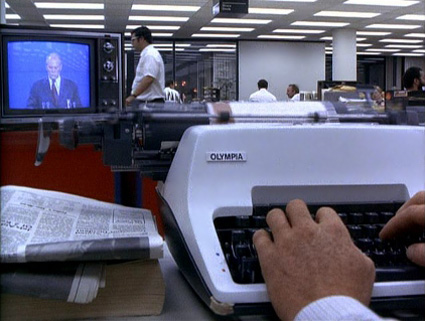 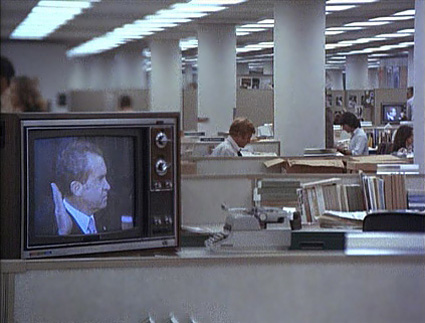 Yes, it's a fact that every society has many, many individuals that just don't give a damn (and someone mentions, during the movie, that "half the country's never even heard the word Watergate"), but that only increases the responsibility of good Journalism to support its stories with truth, with facts - and the increasing use of "anonymous" sources is something terribly concerning (and All the President's Men offers one more great Ethic's lesson in this matter, since all information provided by "Deep Throat" is supported by two or three more sources before being published).

Also influential in cinematographic terms, the movie by Alan J. Pakula would inspire the complex narrative structures of fantastic works such as Zodiac and The Insider, indicating that besides contributing as a historical bookmark and as reflection about media and ethics, All the President's Men is also a magnificent example of the best Cinema can offer.