"The Look of Silence"

Behind the frighteningly absurd world where murderers continue to reign without remorse or regret, pain and sorrow have been silenced by fear and repression for nearly 50 years. Somber and meditative in its unadorned approach, “The Look of Silence” is relatively less sensational than its monumental predecessor “The Act of Killing” (2012), but its intimate perspective on the Indonesian killings of 1965-66 contrasts with the warped perspective of its predecessor, while resulting in some very powerful moments. In the previous film, we hung around the perpetrators who have wielded power over their society along with the twisted denials and justifications of their genocide, and now we observe here how one family has quietly suffered from this monstrous injustice like many other people.

Like “The Act of Killing” had Anwar Congo, “The Look of Silence” has its own unforgettable hero. He is an optometrist named Adi Rukun, and he was born several years after his older brother Ramli was killed during the Indonesian killings (it is estimated that more than 500,000 people were killed during this nationwide anti-communistic purge). Everyone in the village including his parents knows too well who were behind the death of Ramli and many others, but, as chillingly shown through those loony moments in “The Act of Killing,” the perpetrators of this ruthless purge were backed by the Indonesian government and military and most of them continue to exert considerable social and political influences over their communities. They were once barbaric killers to be feared, and now they are powerful elders to be respected.

When he embarked on his documentary project during the early 2000s, the director Joshua Oppenheimer approached Adi’s family and other survivors at first, but then he soon found that many of them were not very willing to talk about it for good reasons, so he went to a number of perpetrators instead. To his astonishment, the perpetrators were unbelievably candid about their atrocities with no apparent sense of guilt, and his growing fascination with these awful people eventually led him to Anwar Congo, resulting in the nutty filmmaking on display in “The Act of Killing."

Along with Adi, we watch the video clips showing some of these perpetrators, and it is often frightening and exasperating to see them crudely boasting of their mass killings in the past. One middle-aged man enthusiastically recounts how he used to kill people mercilessly, and he feels no qualm about telling it all even when his wife is around him. In case of two former death squad members who murdered Adi’s brother and many others, they willingly guide Oppenheimer to their old execution site next to the river near their village, and they even give him a detailed description of their gruesome killing methods—and they later have themselves photographed for this, uh, special occasion.

We also get a glimpse of how this bloody history of violence has been whitewashed in the Indonesian society. At the school where Adi’s two children attend, a teacher gives a short lecture of the fabricated history to justify the purge, and most of his students have no problem with accepting an episode of how evil communists savagely tortured some brave, patriotic generals. In one incredulous scene of archival footage, a local official flatly tells an American TV news reporter that all communists in his town willingly allowed themselves to be executed after learning the error of their misguided ways. That is pretty ridiculous, but who would dare to disprove it there?

Through Oppenheimer, who had closely interacted with Adi during the production of “The Act of Killing,” Adi gets the chance to meet and talk with several perpetrators in front of the camera. He simply wishes to bring closure to his family and other survivors through apologies and reconciliations, but, not so surprisingly, he only comes to experience many infuriating moments of denial and frustration. At one point, Adi visits an aging former death squad member, and the old man phlegmatically recollects his violent past as Adi is examining his eyesight step by step. While we are horrified by his atrocious deeds, including drinking human blood just to keeping his sanity intact, the mood becomes more tense and uncomfortable when Adi goes further to point out his client’s moral blindness, and their conversation ends with a bitter tone once Adi’s job is done. The old man will get his glasses, but, as ironically reflected by an apparent but striking metaphor in this memorable scene, he will probably keep himself blind to his guilt for the rest of his life. 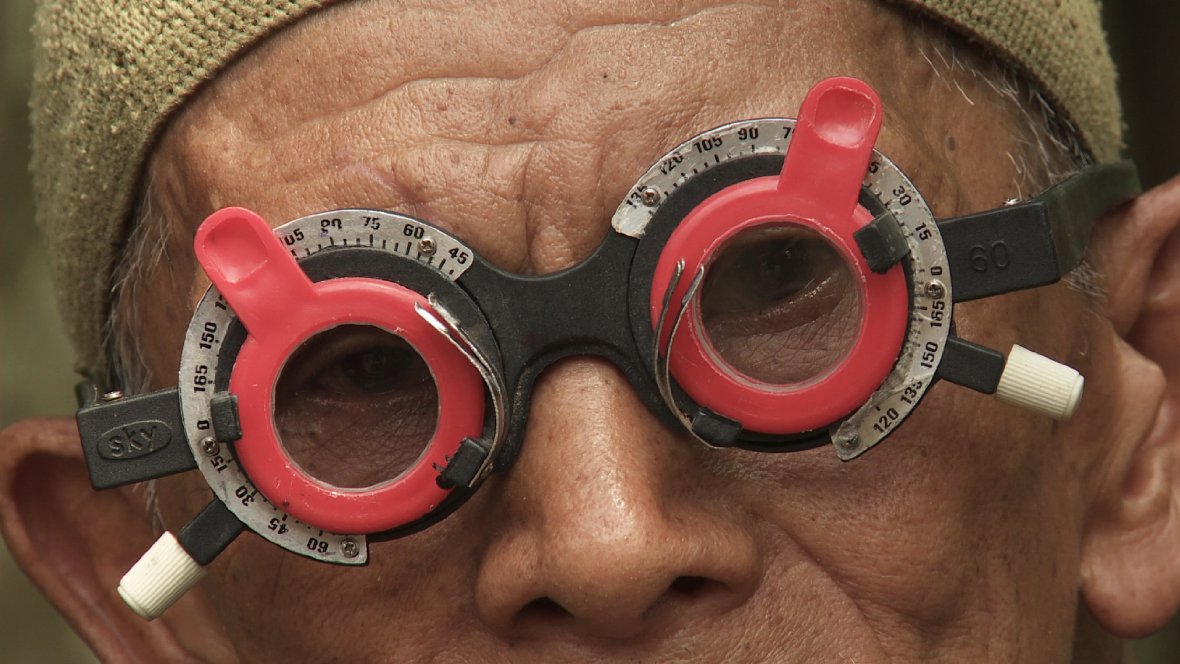 The other interviewees in the film also show similar responses of panic and discomfort. When Adi confronts the surviving family of a former death squad member who already passed away, the family members are visibly upset by what he presents to them. They respond to Adi with anger and disregard, and they keep emphasizing that they have nothing to do with the shameful past of their deceased family member because they did not know anything about that. In the case of one woman accompanying her senile father, she is genuinely shocked by her father’s unintentional revelations and then promptly makes an apology to Adi, but this moment is no less strained than the other confrontation scenes. She is sincere indeed, but her apology looks more like a hurried reflex action for getting out of her very awkward circumstance as soon as possible.

Many people on the other side are not that willing to face their grim past again either. Walking along the very street on which he and others were heading to certain death, a middle-aged man describes to Adi and us how he was fortunate enough to survive during the darkest moment of his life, but he also expresses his doubts on whether it is really worthwhile to delve into the old wounds of the past he would rather keep untouched. While digging further into the past, Adi happens to learn an inconvenient fact about one of his own family members, and that comes to his mother as another personal pain to deal with.

As the documentary quietly observes their domestic life from time to time, Adi’s parents are presented as vivid, memorable human beings as much as their son. Mr. Rukun, who is 103 years old according to his identification card, is a thin, fragile old man gradually becoming deaf and blind, and his wife Rohani is a feisty old lady although she is probably near 90. Despite the tragedy which struck them very hard, they managed to endure anyway, and they must have been consoled to see their second son growing up well to be a decent, thoughtful man who is also a good father and husband to his own family.

But they still feel hurt and are haunted by a past that is not through with them yet. Bitterly reminiscing about their past in front of her son, Adi’s mother shows tired resignation mixed with anger. She is still angry about what happened to Ramli, but there is nothing she can do about it, and she only hopes that justice will be done somehow. The most harrowing moment in the documentary comes from the video footage Adi shot for himself during one night at his parents’ house. His father comes to lose more of himself than before, and it is heartbreaking to see his body helplessly overwhelmed by fear and confusion which his fading mind cannot comprehend.

As a companion piece, “The Look of Silence” powerfully complements “The Act of Killing” with synergistic resonance, and they are great documentaries to admire for their astonishing achievements. During the Q&A session at the Busan International Film Festival in last year, Oppenheimer expressed his wish that Indonesian people will be able to make a documentary film on the Indonesian killings for themselves someday, but I do not think that will happen soon, considering that so many local crew members of both documentaries are merely listed as “Anonymous” in the end credits. Although “The Act of Killing” and “The Look of Silence” were allowed to be screened in Indonesia while gaining considerable public attention, the people who benefited from the genocide remain powerful figures still firmly standing over their victims, and you will not be surprised to learn that Adi and his family had to move outside North Sumatra for safety reasons.

As an individual living in a country which went through a fair share of dark, violent moments during the 20th century and still struggles to process their aftermath even at present, I found “The Act of Killing” and “The Look of Silence” quite universal in their stories and subjects, and I’d like to tell you one very interesting experience my father and I had with other audience members during one Sunday afternoon. Right after the movie was over and the lights were turned on in the screening room, a middle-aged lady stood up and introduced herself, and then she talked about how her family was shattered by a massive anti-communistic purge during the Korean War. Although her mother was forced to remain silent for many years like other survivors, she lived long enough to see the South Korean government recognizing this terrible incident several years ago—but she still did not get a proper apology or indemnification.

When I was about to leave the screening room along with others, I happened to spot a very old woman sitting right next to that middle-aged lady. Probably because of exhaustion, she was asleep during the screening, and her daughter had some difficulty waking her up. I really hope it will not be too late for them when something is done to relieve their personal pain a bit more.