The girlfriend who disappeared from the face of the earth

"'Will you walk into my parlor?' said the Spider to the Fly." - from the poem "The Spider and the Fly" by Mary Howitt.

The crucial moment in George Sluizer's chilling psychological thriller "The Vanishing"(1988) can be summarized with that quote. The Fly cannot resist the offer, simply because of his intense desire to know. The Spider cannot resist making an offer, only because of his cold curiosity about the result. He has a solid prediction based on his careful calculation, but he wants to know the result in his cruel experiment, like he previously tested himself before.

Quite frank about its mystery except one crucial piece of puzzle to be revealed at the finale, "The Vanishing" is about more than discovering what happened on that day. While following the plot which seemingly has nothing to hide from us, we come to see that two dark obsessions approaching to each other with fatal possibility. We observe them with the mounting dread, because they are inevitably going to reach to some point together. Do you remember Hitchcock's definition of suspense? This time, the hero knows there is a ticking bomb under the table just like us, but he is helplessly driven to stay there. 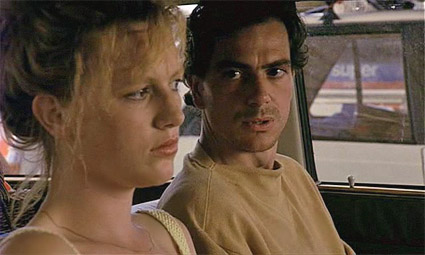 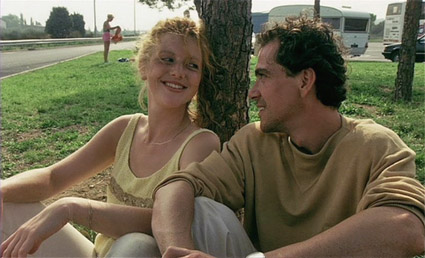 At first, that fateful day was an ordinary summer day for Rex (Gene Bervoets) and Saskia (Johanna Ter Steege), a young Dutch couple who were enjoying their summer vacation in France. When we see them in their car in the opening scene, they are happy together while entertaining each other with word game. Like any other couples, they have the moment when their relationship is put to the test. They have a quarrel, but they soon have a gentle moment of reconciliation at the gas station. After they confirm their love to each other, Saskia excuses herself for a moment for buying drinks for them when they are about to leave. He happily waits for her to come in the meantime. Everything seems to be all right; the radio news, a usual harbinger of something bad about to happen in thriller movies, is busy with the Tour de France while the sky is blue and the sun is shining.

But Saskia does not come back. Rex continues to wait, but she still does not return. He looks around the gas station, but there is no trace of her. He asks around, but, though some people remember seeing her, she still cannot be found. He has a faint proof that she was really at the gas station, but that does not help him much to find the clues for her whereabouts. She is pretty much like vanished into the air. 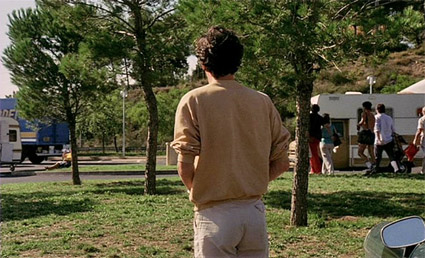 This could be a nice premise for an action thriller movie centered on the hero's search for hid loved one (Jonathan Mostow's "Breakdown"(1997) is a good example), but Sluizer's screenplay, based on his co-writer Tom Krabbѐ's novella "The Golden Egg", takes a more interesting route. The movie lets us know far more about the mystery than Rex; we see some guy waiting for something at the gas station at which Rex and Saskia arrives, and it does not take more than 10 seconds for us to guess that he is the one who kidnaps her. 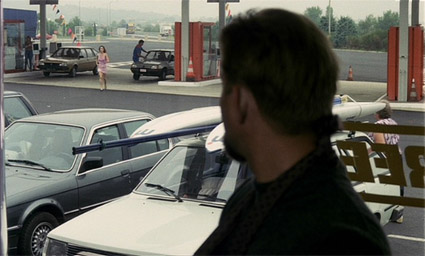 The movie goes further with this man, Raymond Lemorne (Bernard Pierre Donnadieu). In the flashbacks, we see his meticulous preparation. He prepares the place ideal for his plan. He checks whether the place is as remote as he thinks, while not drawing the attentions from others. He practices his tactic for drawing his future prey into his car. He is a perfectionist; he carefully checks his pulse rate during his mock trials.

On the surface, he is a chemistry teacher with his loving family. His family seems to feel there is something odd about him, but they have never imagined what he is up to. In their affluent middle-class environment, they only think he bought the house in the countryside for having an affair with someone. Of course, he assures them, with all his gentle honesty, that is not true. ("I'm the last French man who can be proud of having known only one woman in his life."). 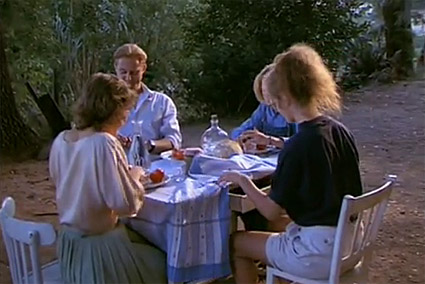 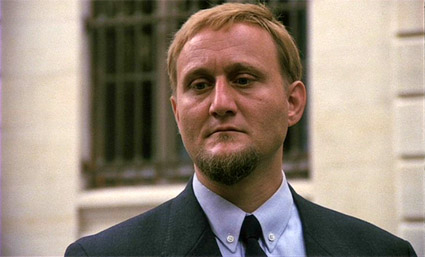 The icy but humorous performance by Bernard Pierre Donnadieu, whom you probably remember for a small but crucial supporting character in "The Return of Martin Guerre"(1982), is fascinating insidiousness. Despite his sociopathic side he casually admits, he is capable of doing right things, but that makes him very, very curious about himself. If he can do something good, then can he also commit something the most horrific ever imagined by him? I would reply to him that people are capable of doing anything at the right time and at the right place, but he really wants to confirm his ability for himself, and that sets him into the motion. At one point, he indirectly tells about his obsession to his daughter. "You start with an idea in your head. Soon, you realize you're up to your neck in something intense, but that doesn't matter. You keep at if for the sheer pleasure for it. For the pure satisfaction it might bring to you. And that, my dear, that can't measured in miles." 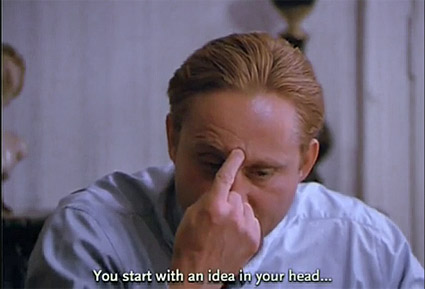 And now his focus is directed to Rex, who has grown his own obsession since Saskia's missing. Nearly three years have passed, and he is still looking for the clues. While recognizing that there are lots of possibilities that Saskia was dead, he is dying to know what really happened to her, and, as shown in his apartment, his daily life is entirely devoted to that single aim.

His troubling state has made his current girlfriend quite exhausted. Lieneke, played by Gwen Eckhaus, is not angry about Rex's incorrigible behaviors. She wants to help him - but she can't. Bervoets and Echhaus have a sad quiet scene with few dialogues. While watching the video tape of his interview on TV, they silently admit their relationship is beyond the repair. Rex cares about her, but he cannot help himself. As Lieneke dryly points out, between her and Rex, there has always been the woman who probably does not exist anymore. You can easily compare Lieneke with Barbara Bel Geddes' character in Alfred Hitchcock's "Vertigo"(1958); both are down-to-earth women who care about and are frustrated about the men obsessed on the mesmerizing ladies who disappeared from their sights.

Rex's life continues to proceed into the downward spiral, and then Raymond suddenly appears in front of him. Very candid about what he did, Raymond has an offer with twisted kindness. If Rex accepts his conditions, he will give Rex the answer he has been desperately yearning for. Or, with more misery, Rex will lose the only chance to know what happened to Saskia. 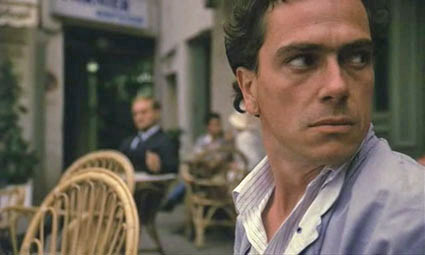 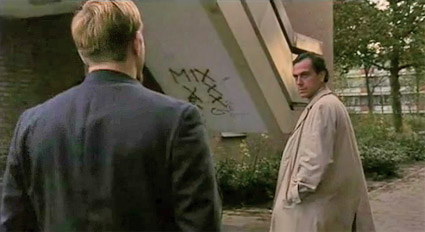 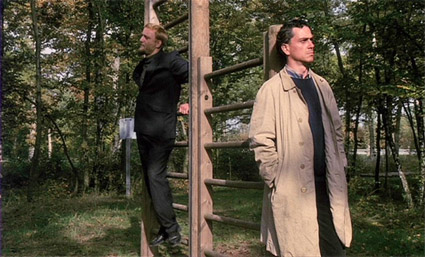 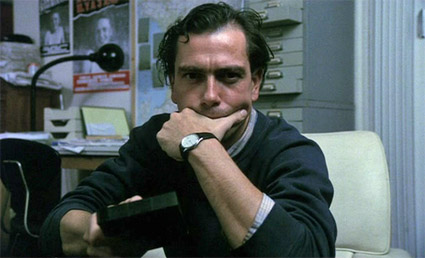 I like the way how the movie keeps maintaining its calm approach during its predicted third act. It focuses on the compelling interactions between its characters who finally encounter with each other, and this is not a simple confrontation between good and evil. You may admire Rex' perseverance, but his obsession has isolated him from the world while lots of things - money or personal relationships - were sacrificed in the meantime. In one disturbing scene, he penetratingly stares at the computer screen on which his former lover's name keeps appearing. Besides his psychotic side, we can say Raymond is honest and kind in his limits, though he still holds his deadly cards behind his back.

The movie is the most well-known film in the director George Sluizer's career. The uneasy atmosphere is subtly accumulated with small foreshadowing and hints in the mundane settings. There is some morbid humor inside the story. The movie has a wry fun with Raymond's trials, which exemplifies "Easier planned than done". At one moment, he tries to lure one woman into his car, but she turns out to be one of his acquaintances, who unknowingly gives him a valuable advice for his plan. And there is the amusing interlude between Raymond and Rex before they eventually arrive at the certain point where an important decision must be made. Echoing the word game between Rex and Saskia in the opening scene, this scene makes us sense that we are following them through the familiar path - and we begin to get some dreadful idea about what will happen in the end. 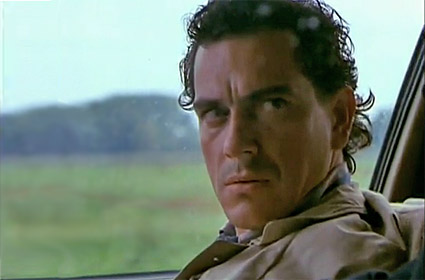 With his film, Sluizer had a breakthrough in his career which started in the 1960s, but, unfortunately, he later made the biggest mistake in his career; he directed the American version of his film which ruined the original plot. The actors including Jeff Bridges, Kiefer Sutherland, Nancy Travis and Sandra Bullock were not bad as the main characters, but the revised script changed the third act, so we got what we usually expect from the average mediocre thrillers made in Hollywood - "Third Act Syndrome". The cunning villain delves into stupidity while the other characters become smarter than before with lots of unbelievable contrivances, just because, in some people's view, a certain type of ending is more marketable than the original ending in US market. Were they afraid that the audiences might feel depressed due to the original ending? Come on, folks, as Roger Ebert said before, only bad movies make us depressed, not good movies.

Frankly, I have no idea why Sluizer chose to direct that lousy movie. Probably, like Hitchcock, who made two versions of "The Man Who Knew Too Much", Sluizer thought he could try another direction in his story, but "The Vanishing" is a claustrophobic thriller which logically narrows down step by step to the only ending possible for its story, and that ending is absolutely required for the gut-wrenching effect in the finale. To be frank with you, I was one of the victims who unluckily watched that forgettable remake version first (the original version has not been officially introduced in South Korea yet), so I was not that shocked, but, when I finally watched the original version, I was very glad to see the story served in a right way. 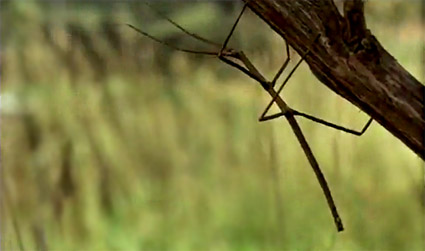 By the way, during my second watching, I noticed that both opening sequence and closing sequence feature an insect. The one is a stick insect, and the other one is a mantis. Are they representing the cold ruthlessness camouflaged behind Raymond's gentle appearance? Or, do they tell us that how insignificant we are in the world, which can go around regardless of our existence? The last shot of the film reminds me of that dour truth in Hitchcock's "Psycho"(1960). We may be trapped in one way or other, and we may never get out of our private golden egg - even at the end of our life.