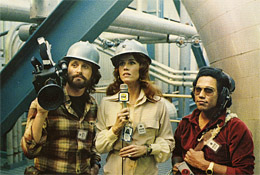 While I heard the alarming reports coming from the Fukushima I nuclear power plant, an unforgettably intense sequence from "The China Syndrome" (1979) immediately came to my mind. An earthquake occurs without warning. The power plant is automatically shut down. They get a problem with the level of the coolant. The plant is on the verge of nuclear meltdown. The catastrophe of epic proportions may happen as a consequence.

The term "China Syndrome" metaphorically refers to the dangerous consequence resulted from such containment failure. Because of its hot temperature due to the radioactive heat emitted from fission products, the nuclear fuel can rupture its metal case even when the power plant is shut down. If it cannot be cooled even after that, in the worst scenario, they cannot stop the molten fuel from penetrating several levels of the containment system. Hypothetically, once it gets out of the system, it will continue to melt through the earth crust and core; it will eventually reach to the other side of the earth opposite to US - China. (However, geographically, it would be the Indian Ocean, not China). Actually that is impossible, but, once the molten fuel is leaked out of the system, the radioactive materials will be inevitably spread around in the air and on the ground; that will cause huge damage to the environment around the plant.

While effective as a cautionary story about the inherent danger in one of main energy sources for our civilization, the film is a superb thriller that has lost none of its strength to tighten us. The tension comes from the main characters who seem as real as we watch them, and it keeps mounting as we grasp the urgency of the situation with which they struggle as much as they can. We become nervous about the danger they try to prevent, and we come to really care about what will happen to them. We know that their careers, and perhaps their lives, are at the stake. 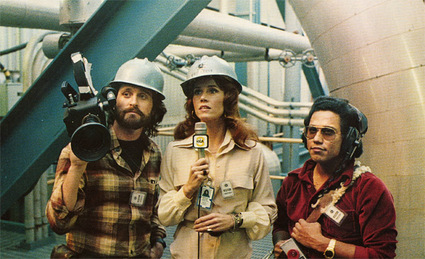 They are just doing their jobs as on any other day when the incident happens. To local TV reporter Kimberly Wells (Jane Fonda), the nuclear power plant seems like a mere deviation from her usual subjects such as how to celebrate birthdays, or animals in the zoo. She arrives at the Ventana nuclear power plant, meets a PR guy, and does the routine news coverage with her friend and cameraman Richard Adams (Michael Douglas). While they look around the plant, they also have a nice opportunity to observe how people work in the control room from the observation gallery. 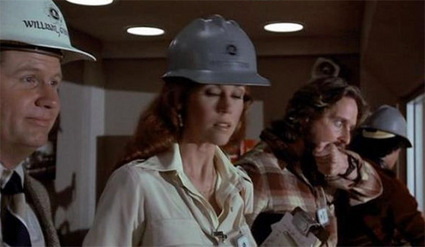 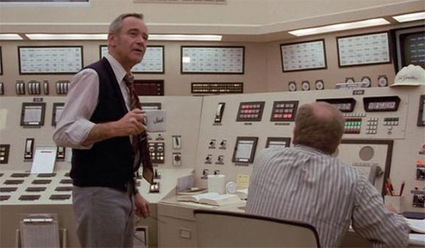 And that is when the incident begins. After being trembled by a sudden earthquake, the plant quickly goes into the emergency mode. The shift supervisor Jack Godell (Jack Lemmon) calmly handles the situation. It seems everything will be all right at first, but he and his colleagues soon realize they have just made a big mistake. Because the needle in the panel indicating the coolant level in the reactor was stuck above, they thought the coolant level should be lowered. Now the level is dangerously too low, and the meltdown will happen if they don't do something. It may sound preposterous, but I learned later that such a case really occurred in the past. 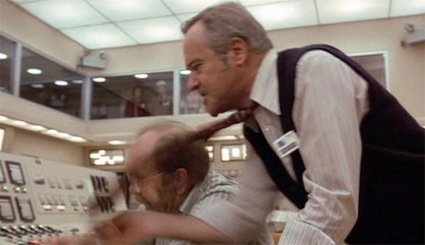 This sequence is handled with disturbing stillness that effectively conveys the possible outcome they may have to face if they are not lucky. Most of what we see is mainly comprised of the panels monitoring this perilous situation, but the wordless nervousness among the people in the control room is palpable. While watching this moment, I thought about how people at the Fukushima plant tried desperately to control their disastrous situation. The outcome was far worse, but they did the best they could do. 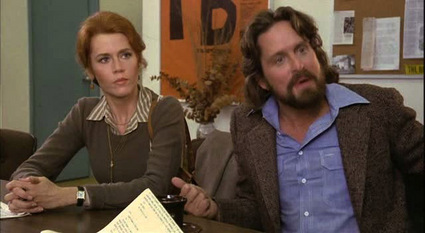 Although told that nothing serious is happening by a PR guy, Kimberly senses that something serious is going on in the room though she can hear nothing. So does Richard. He surreptitiously turns on his camera and films the whole incident with her tacit approval. She wants to make her big break with this (although she is popular, she is tired of meandering around 'soft news'), but her plan is soon blocked by her superiors, who are afraid that they will be sued for violating the law. Kimberly follows their decision, but Richard decides to do something, and that causes headaches to Kimberly and others. However, all of them soon realize they have big news they cannot easily throw away.

Meanwhile, on the other side, Jack Godell begins to face another difficult situation. While Jack Lemmon can be your funniest man, as shown in his collaborations with Billy Wilder and other comedies, he can also be a conflicted everyman you cannot easily forget in the movies such as "Save the Tiger" (1973) and "Glengarry Glen Ross" (1992). In one of the best performances in his illustrious career, Lemmon presents us a man who has devoted most of his life to his work. When he says he cares about his power plant, there is genuine sincerity. He has a firm belief in the system he belongs to. He emphasizes to Kimberley her how the nuclear plants are meticulously designed and thoroughly tested and maintained.

But he does not tell her everything. There could have been a catastrophe to affect all of Southern California, but the danger was prevented under his supervision. In his view, nobody needs to be disturbed by the incident since nobody got hurt. The system works, so it is better to move on while learning an important lesson from the error he and others committed. 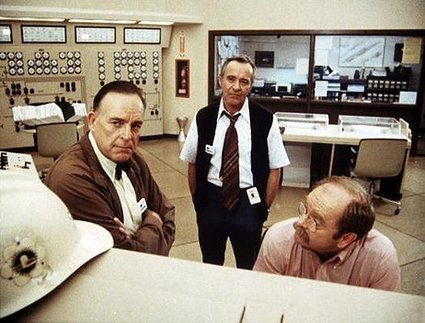 However, as a dedicated professional, he cannot ignore the second vibration that he felt some seconds after the earthquake. The investigation committee concludes there is nothing wrong with the plant, but his suspicion turns out to be right. He finds a leak from the pump. He also finds that the X-rays showing the welds of the pipes are all copied from a single X-ray picture. He is convinced that the plant is unsafe and needs an examination. But his colleagues and superiors turn a blind eye to the problem for it will jeopardize the company management.

From this point, the film shifts its gear into more suspenseful mode. Godell is visited by Kimberly and Richard, and he reluctantly becomes their whistle blower to provide the evidence. There are some people who are not pleased about this, and they will do anything to stop them. There is a particular moment that reminded me of the doubtful circumstance surrounding the death of Karen Silkwood, whose real-life story later inspired Mike Nichols' Silkwood(1983), another good movie about a whistle blower who tries to expose the safety problems in the nuclear power plant. 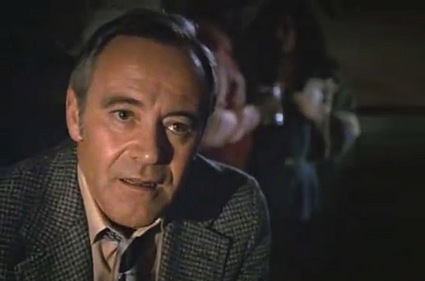 Directed by James Bridges, the movie has lots of verisimilitude thanks to his approach reminiscent of the naturalistic style of Sidney Lumet's films. From the opening sequence showing the work process at the broadcasting station, it puts us right in the story. The circumstances and places are depicted as real as possible. The absence of a score intensifies the acute reality shown on the screen (they initially had a score composed by Michael Small, but they wisely chose not to use it). Maybe I am overpraising it, but I can say "The China Syndrome" is one of the best Sidney Lumet movies not directed by him.

The film's unobtrusive style serves Lemmon and other talented actors well. Jane Fonda was Oscar-nominated along with Lemmon for one of her strongest performances in the 1970s. Like Lemmon, she convincingly depicts her character's transformation, and the scene where she cannot help but lose her objectivity as a reporter in front of a camera is heartbreaking. Michael Douglas, who also produced the movie, competently plays a character different from what we usually associate with him now. As Godell's close friend and assistant Ted Spindler, Wilford Brimley gives a subdued but impressive acting that started his long supporting actor career. Although he cares about his friend, Spindler does not want to get himself in trouble and chooses to go along with others -- but there is a breaking point where he decides that enough is enough. 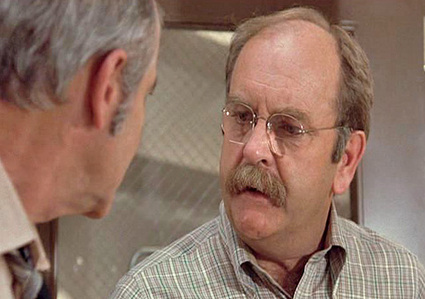 There are some dated aspects in the film due to social changes and technological advancements during last 32 years, but it still effectively raises the question on the safety of nuclear power. It is well-known movie trivia that the Three Mile Island nuclear accident happened less than two weeks after the movie was released in US. But there had been several accidents more serious than that, and, as we know, there also have been other big and small cases after that -- including the Fukushima I nuclear accident, which is considered be the second largest nuclear accident after Chernobyl.

It is possible that many things can go wrong even with best efforts and intentions. There are the factors beyond our control like the earthquake and tsunamis, and, as the movie points out, there are also human errors. Can we live with that risk? Whether you like it or not, the nuclear power will be one of main energy source options after we run out of oil, and that question will not be easy to answer.

Overall, "The China Syndrome" is a terrific thriller that not only makes you think about its subject but also makes you agitated a lot with the chilling possibility in its subject. Rarely do movies activate an alarm in my head with pure gut-chilling effect, and this is one of few ones capable of that. It can happen; and we know that too well.