Should "JFK" have even been made? 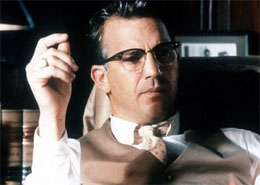 It seems like every film inspired on real-life events becomes controversial for one reason or another. The greater the subject's notoriety, the louder the outcry. The backlash to Oliver Stone's "JFK" was extreme by any standard; it became one of the rare features widely attacked for existing in the first place. This wasn't all that surprising; the movie took one of the most painful events in American history and came up with shocking, damaging conclusions. That Stone tackled the "whats" of the case (the pieces that didn't fit) was already a touchy proposition; that he tried to uncover the "whys" is what took the reaction the next level. Should a film like this have been made?

Every motion picture or documentary represents the creation of an author and as such, it brings along a personal point of view. No feature can adhere completely to the facts; for starters, this would imply the presence of witnesses to every event they depict. In movies based on real-life, pivotal characters are often invented ("The Social Network"), facts are changed ("The Hurricane"), regular people are made to look like movie stars ("The Sound of Music") and characters are usually much more interesting than the people who inspired them.

When choosing between being accurate or making a better picture, every filmmaker will go with the latter option. I could be wrong but I doubt the real Jim Garrison ever really proclaimed "Let justice be done or the heavens fall!" to a crowd of challenging reporters. What I know for sure is that this movie was better because of the way the scene was conceived.

The story of "JFK" focuses on Jim Garrison, the New Orleans District Attorney whose familiarity with Lee Harvey Oswald leads him to become suspicious about the involvement of other local figures in the assassination of President John F. Kennedy. He slowly builds a puzzle (with leads obtained by his staff from various sources) that culminates in the prosecution of Clay Shaw (Tommy Lee Jones). The man is charged for his alleged participation in the plot along with Cuban exiles, Mob personalities and government officials. According to Stone, the Military Industrial Complex was behind them all the way as they saw Kennedy's peace initiatives like a threat to their existence. 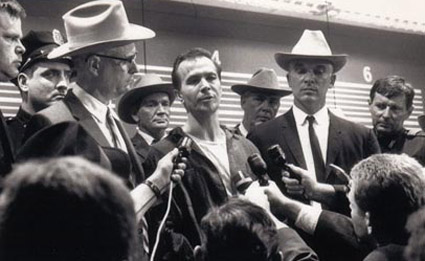 Clay Shaw's trial becomes the central piece of the movie but it merely represents a vehicle to display Garrison and Stone's theories about the events surrounding the assassination. At the end, after being showered with numerous, shocking scenes (real and re-enacted) involving the assassination and conspiracy theories, we care very little who is being prosecuted and for what.

Based on the on-screen depictions, it's fairly obvious Garrison never remotely had the case to convict Shaw beyond a reasonable doubt. The film may show the prosecutor being treated unfairly by an intolerant, partial judge but it's hard to conceive that in real life he would have been allowed to constantly deviate from the subject being tried. The weakest aspects of "JFK" are clearly the depiction of every character in black & white terms, and the clichéd family crisis brought upon by Garrison's obsessions (think of him being left by himself at the trial by his wife after an argument, only for her to join him at the last minute, along with the kids).

On one hand there's the immaculate memory of John F. Kennedy (who Stone and Garrison seem to worship) and on the other there are the film's villains shown with sinister under-lighting. These deficiencies end up becoming irrelevant as the human relationships in the movie are merely a vehicle to convey Stone's theories and make them more poignant.

Quick-cut editing serves as an invaluable tool in seamlessly merging different sources of material in order to convey Stone's theories. The location shoot at Dealey Plaza is not just there to be showy; it actually helps us grasp crucial points such as why the spot where the assassination took place makes the existence of a single shooter unlikely. Aside from the dramatization of the Garrison story, the film provides re-enactments of real-life events (shot at the actual sites) mixed with dramatizations of Stone's personal conclusions (think of Lyndon Johnson saying "you get me elected and I'll get you your damn war!").

There are also real images of the assassination combined with complementing material of the same nature, shot by Stone some thirty years later. These elements aren't particularly difficult to tell apart but the end results feels so convincing that there was always the risk that some viewers could validate the entirety of Stone's theories. Few movies have required the audience's good judgment in analyzing its content more than this one. 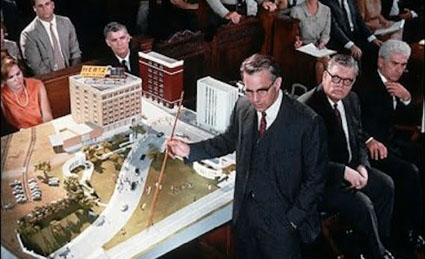 We'll never know how close Stone came to the truth but he regards his theories as fact and uses every cinematic tool available to convince the audience, with mixed results. It's one thing trying to make a case against the Warren Commission's conclusions and another to come up with a convincing explanation on what caused the events in Dallas, regardless of how certain Stone feels about them. (His conspiracy theories are mostly based on who he believes stood to gain from Kennedy's death.)

Anytime a director casts an actor like Kevin Costner to play a prosecutor delivering a heartfelt summation, we must keep things in perspective and remember it is only a dramatization of events that we're watching. Every good feature requires a hero and a villain and screen-writers usually take their liberties in providing them. Some characters are going to end up looking better than their real-life counterparts; some are going to end up looking worse. It's up to the film-makers to choose which of them gets each treatment and it's up to the audience to be conscious of this. Movies are not the best place to find facts. 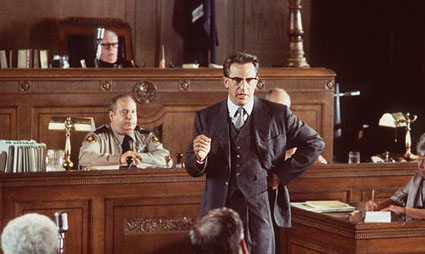 I was dumbfounded to learn that Walter Cronkite would chastise critics for praising "JFK." The dismissal of any work requires a point-by-point refutal which was exactly Stone's approach to the Warren Commission's Report, and the very thing that Cronkite's statement about the film lacking a "single shred of truth" does not encompass. Even putting aside the film's cinematic virtue, Oliver Stone clearly came up with some valid points and made some of the crucial conclusions from Warren Commision seem like the equivalent of making a square peg fit into a round hole.

His depiction of the implausibility of the bullet's trajectory and timing by itself raises enough valid questions to justify the movie's existence. This scene became memorable to the point of later being parodied in an equally notable spoof in "Seinfeld" (with Wayne Knight and using spit instead of bullets). Perhaps it was hard for a man like Cronkite to consider the possibility that such nefarious acts (and their cover-up) came from respectable sources. He might also have been concerned that the picture's realism could fool viewers into believing everything they saw but, at the end of the day, I doubt many completely accepted Stone's theories. The filmmaker seems to have no other agenda than sharing his two cents on the subject and managed to bring further discussion into this episode, allowing for the release of classified documents that weren't scheduled to be opened for decades. In the final analysis, he clearly brought more good than harm. The subject matter certainly made for a worthy cinematic premise. 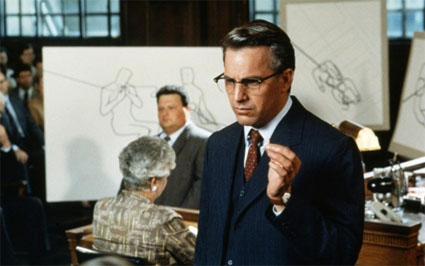 "JFK" is an innovative piece of filmmaking whose editing techniques influenced the way many action movies are made today (for better and worse). This is one of those rare films that lets the audience acquire a good idea on what the chaos and paranoia from those days most have been like. Sometimes I wonder if it would have been better for the director to make a documentary on the subject instead but it seems unlikely he would have altered his perspectives or approach notably; besides, his is an event whose translation to the screen was never going to please everybody anyway. "JFK" would more aptly have been named "Oliver Stone's JFK" as it represents the most personal of views.