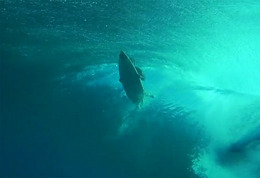 "The church of baseball." That's a term from Annie Savoy, Susan Sarandon's vivid character in "Bull Durham," that film of men, women and baseball, written and directed by Santa Barbara native Ron Shelton. I'm lifting the phrase here, adapting it for films and film festivals.

Call it the church of cinema. That's been my experience and my "church" since age 18, a kid in college. I'd escape the campus upheaval, both political (this was the anti-war era) and personal (the sexual revolution hitting big time), and my search for identity, with a respite every Wednesday afternoon; with a couple dozen others, I became a weekly acolyte at screenings of the International Film Series at the University of Colorado at Boulder. There I discovered Belmondo, Bertolucci, "The Battle of Algiers." My world blew open and I never looked back.

"Megaphone" by Perry Gripp, animated by Harry Bossert (aka, Zoot101)

When I suggested doing some writing from the Santa Barbara International Film Festival for RogerEbert.com, Roger said okay. "Have them email me about credentials. They know me there." "Yes, I do believe they do" was my reply.

So here I am now to watch and write, with the festival in full gear, dominating downtown Santa Barbara thru next weekend. There are more than 170 films to choose from, an overwhelming task which PR maven Carol Marshall and her able staff have made easier. I've been attending multiple screenings, seminars, and yes, when possible, parties.

Watching movies in the dark, even in sunny S.B. (unseasonably warm this week), is surely one of the great pleasures in life. And somehow, doing this with other people who, in their varying ways, are also here because they love movies, makes it better still.

I take a seat for an afternoon screening on first day. The film, from Quebec, is "A Life Begins." But there are predictable projection problems: first, a picture with no sound, then the reverse. The audience gets a tad restive. A woman behind me says affably, "You win some, you lose some. That's what it's all about at a festival." (That excellent attitude can be applied to festival films, too, and it's a wise moviegoer who does.)

With the technical issues resolved, the Festival's introduction starts. A real surprise the first time around, it's a colorful animated short with a band of Legos characters marching to a hip-hop song called "Megaphone." Listen carefully and you'll hear lyrics fairly critical of the SBIFF. Turns out a local musician, Parry Gripp, wrote the tune after one year's festival, aptly describing the reactions of some Santa Barbara residents who'd felt pushed to the side or made to wait in long lines by megaphone-wielding festival volunteers. It's not an unusual response in this or any town with a long-standingly ambivalent relationship toward its economy-feeding events and tourism.

Enter youtube. In England, a kid named Harry Bossert (aka, Zoot101) makes animated films, often with Legos, and also regularly downloads Parry Gripp's spoofy tunes. He decides to animate this one. When SBIFF learns about it, rather than smarting from the criticism, they make a bold move, adopting it as the 2011 theme and opening. They even put a megaphone-wielding figure on the poster. And they fly in Harry, a sweet-faced 16, and his pleasant father, both amazed at suddenly being here in southern California, the red carpet for the moment at their feet.

That's the magic of a festival. Filmmakers of all ages and many backgrounds have gathered from 49 countries, mixing together in a common language: cinema.

At the press breakfast held at Moby Dick's on Stearns Wharf, there's a cadre of New Zealanders, here with their four-years-in-the-making movie, "Nothing To Lose," a Western supposedly set in America but shot in their own beautiful outback --- a film I look forward to seeing this week. They're looking for distribution, hoping the success of "True Grit" works in their favor. 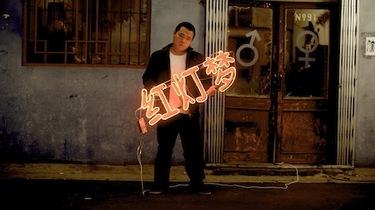 Sitting next to the handsome lead actor is a young Australian director, Sam Youtas, who lives and makes films in China. For "Red Light Revolution" ("China's first sex shop comedy"), he managed an entire cast and crew in Mandarin, which he speaks fluently. Youtas reports the Chinese film industry is vibrant, exploding, but that an independent director like himself struggles there as much as in the U.S.

And next to him, a Hawaiian-born director, Jack McCoy, now living in Australia and here with his film, "A Deeper Shade of Blue," about the surf culture in Hawaii. McCoy bought a curious-looking $30,000 vessel, then tricked it out with special cameras, in order to get the shots he envisioned. 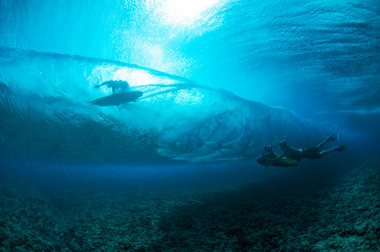 All festivals have tributes, often coming out their ears. I've attended enough of them that I'm probably a bit jaded, even as I recognize the worth of presenting stars in such venues: they're a major audience draw, selling tickets and helping a festival succeed.

The one for actress Annette Bening turns out to be quite wonderful. Arriving with her husband, a beaming Warren Beatty, Ms. Bening is gracious, modest, understated. SBIFF director Roger Durling does a fine job interviewing her, in a conversation interspersed with clips from her admirable and luscious career, including "The Grifters," "Valmont," "American Beauty." Then Kevin Costner, who directed her in his western "Open Range," presents her with the American Riviera Award, calling her "a Director's dream: a prepared actor...She's our Kate Hepburn." 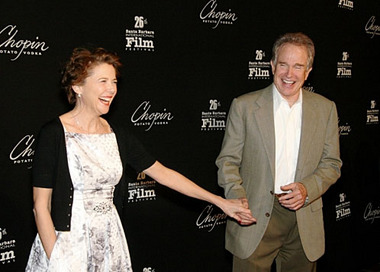 And that's true. Meryl Streep is Meryl Streep (one of a kind) but Annette Bening is right up there with her. I've never forgotten seeing her do Shakespeare, a very young theatre actress performing for a season at the Denver Center Theatre Company. The cast was large but she stood out unmistakably, a big career in the offing.

We'll know in four weeks whether Annette (nominated for "The Kids Are All Right") has finally won her Best Actress Oscar. Right now the odds seem to be with "Black Swan's" Natalie Portman, who has just won out at the Screen Actors' Guild. While I won't be unhappy if Ms. Portman wins, I'm rooting for Annette.

SBIFF has several advantages among festivals. One is location --- an easy ninety minutes north of Los Angeles, and who objects to visiting Santa Barbara? Another is that it occurs smack in the midst of the awards season, following the Golden Globes, right after the Academy Awards noms come out, and not too long before those shiny statuettes are bestowed. Nearly all the nominees in some key categories (actors, directors, writers) will make appearances here, adding a definite frisson to festivities. 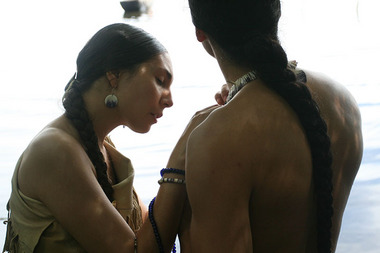 As the first weekend ends, I've seen a moving, rather pristine documentary ("We Still Live Here") about the Wampanoag tribe of Massachusetts, whose forbears helped create what we now call the First Thanksgiving. The film by Anne Makepeace tells of the small tribe and its passionate revival of its lost native language. I've heard a a lively, yet collegial discussion among all five of the nominees for best screenplay, as they talked about their scripts, their writing processes. Aaron Sorkin ("The Social Network"), looking preppy in a yellow sport jacket and big glasses, sits next to Scott Silver ("The Fighter"), who's in a t-shirt and jeans, head shaved, big beard. And there's David Seidler ("The King's Speech"), describing how he agrees to hold off writing while the Queen Mum (wife of Bertie) is alive, meaning, since she lives to 102, that he must wait another 25 years!

Sunday I attended a Bloggers' Panel (one of the first at a film festival) about the future of film journalism. At the start, moderator Peter Rainier, a terrific critic, exclaims, "If this is the future of film journalism, we're in trouble. And I include myself in that!" The talk among these panelists is spirited, and more competitive than the screenwriters, with much of it focused on handicapping this year's Best Picture: "The Social Network" or "The King's Speech" - and is it the end of the world if the latter wins?

I've now spent several days in the church of cinema, knowing there's a full week yet to go. Tonight I will sleep very well.