In case of some people, you miss them dearly when you are apart from them, but then you remember how unpleasant they can be when you are near them. I do not know much about Tom Dark, whom I met for the first time during 2010 Ebertfest, but he was definitely an opposite case in my opinion. I enjoyed his presence during those five days of 2010 April in Urbana-Champaign, Illinois, and I have wanted to meet him in person again since the festival was over, but I also remember how much I have been baffled and annoyed by his strange comments and behaviors on Internet. To be frank with you, whenever I received his latest e-mail on his dreams or whatsoever along with my Far-flung Correspondent fellows, I frequently felt like a rookie archaeologist sweating over newly discovered ancient hieroglyphs, and I kept asking myself what the hell he really tried to talk about.

However, as others will attest, he was not a mean guy at all – he just had a tendency to grate on me and others when he communicated with us on Internet despite his good, huggable nature in real life. When I happened to watch one episode of TV series "Frasier" featuring Cliff Clavin and other main characters from "Cheers", I noticed how similar Tom was to Cliff in several aspects. Cliff is also a nice guy, but conspiracies and other bizarre things he talks about are pretty weird to say the least, and he keeps talking about such things all the time in front of others. As a guy who had to pay attention to what Tom said or wrote as a friend while resisting the urge to block this eccentric codger who seems to have some private issues, I must say I felt really sorry for other characters 'abused' by Cliff while watching that episode.

Yes, I did not know what to do with his twitter comments or e-mails, but there were also good times, and that was why he was a little more than a disposable acquaintance to me. While he showed me and others those nice pictures of his horses and the environment around his residence, he also gave me some nice pep talks during our short conversation on twitter when I was depressed by my failed status as a banished graduate. In addition, I fondly remember how he was amused by the poster of "Bluebeard" (1972) posted by me ("That is truly scandalous.").

And he was surely one of the most interesting persons to watch at 2010 Ebertfest. I saw him for the first time during the Opening gala at President's House, but I just passed by him and Grace Wang, one of FFC members, for it was apparent that this old guy was platonically infatuated with her. Who knows what would have happened if Tom had been unmarried and as young as Grace.

The first movie shown at 2010 Ebertfest was "Pink Floyd The Wall" (1982), which was a depressingly electrifying experience, and we all got relaxed as Ali Arikan, Christy Lemire, and Tom Dark led the discussion and following Q & A session. I do not remember a lot about their talk or following questions, but Tom attracted my attention when he mentioned Peter Medak's cult film "The Ruling Class" (1972) during the discussion, and I was willing to discuss about that hilarious film if I got a chance to have some private talk with him.

However, due to my introverted personality, I merely hung around him and others during the rest of the festival while not talking much with him. He once jokingly commented that I was the only guy who did not like to be hugged, and that is pretty much true considering that, even though I talked a lot about movies with others at that time and enjoyed every minute, I was frequently shy and distant compared to others as far as I can remember. Not so surprisingly, my psychiatrist diagnosed later that I had Asperger's syndrome, and the diagnosis turned out to be indeed correct after the formal evaluation.

I'd love to meet Tom again at the Ebertfest, but, sadly, that is not possible now. Yesterday morning in my time, my FFC friend Omer M. Mozaffar notified me and others that Tom Dark died on this Monday after falling into coma on last Friday due to a diabetic problem even he did not know, and I instantly expressed my condolence on Twitter. Though I am still not so sure about whether I really knew him, I will miss this old guy like I have missed my late friend/mentor Roger Ebert. Tom may have been an old cantankerous jerk, but he was our old cantankerous jerk nonetheless, and I sort of liked him anyway. 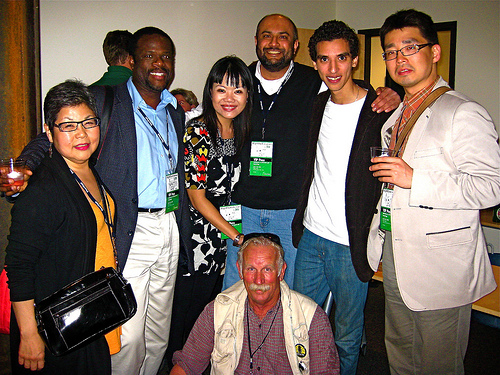