December 7, 2016 is the 75th anniversary of the bombing of Pearl Harbor, a day that then-president Franklin D. Roosevelt called "a date which will live in infamy." Remembering Pearl Harbor became a battle cry that led the US into war and toward re-examining race relations. There are still stories to be told about World War II, but Hollywood isn’t necessarily telling them.

My most vivid memory connected to the bombing of Pearl Harbor happened on a sunny day in Santa Barbara. I was cycling on a lonely street when four young white men in a car drove by me and shouted, “Gook.” The men then circled back to harass me, making it clear they remembered Pearl Harbor. When they came around a third time, I turned into a parking lot of a church. People were streaming into the parking lot as I turned my bicycle around and verbally confronted the men, who, like me, were born well after the bombing of Pearl Harbor.

More than 2,300 US servicemen were killed during that December 7, 7:55 a.m. aerial attack. Most of them were white because the US military was segregated then. President Harry S. Truman officially ended the segregation of US military with Executive Order 9981 in 1948. Still a black hero did emerge, Texan Doris Miller (1919-1943).

Racism in Southern California where Asians currently make up about 11% of the population isn’t just black and white. It never was. Non-Latino black are only 6.4% Latinos are 32%. Prior to World War II, California helped pass the first federal law to prevent the immigration of a specific ethnic group (The Chinese Exclusion Act of 1882), even though Chinese Americans had fought on both sides of the Civil War. With China as an allied nation, the exclusion act was repealed by the Magnuson Act (December 1943). Asian Indians would have to wait until 1946.

Before the Magnuson Act, Roosevelt signed Executive Order 9066 (February 1942) and enabled the Secretary of War to intern Japanese and Japanese Americans as well as, to a lesser degree, people of Italian and German ancestry. Not only were the internment camps mostly filled with American-born citizens (62%), the camps also included ethnic Japanese deported from Latin America. Most of those ethnic Japanese were from Peru. Some of these Latin Americans would be without a country at the end of World War II, illegal aliens in the US until 1953.

Recently, when former Navy SEAL and former spokesman for the pro-Trump Great America PAC Carl Higbie mentioned the Japanese American internment camps as a precedent for a registry of Muslim immigrants, the online arguments devolved into a two-party problem. The Republicans are the good guys and the Democrats, the bad guys. Racism doesn't work like that. Yes, President Ronald Reagan, a Republican, signed the Civil Liberties Act of 1988 which authorized the reparations, but the bill was sponsored by Democrat Norman Mineta and Republican Alan K. Simpson. During World War II, FDR was a Democrat, but Republican Earl Warren was California's Attorney General at the time and a strong advocate for the internment.

Warren was also a member of the Native Sons of the Golden West, an organization that was a mix of Democrats and Republicans, and prior to World War II, highly anti-Asian immigration. Warren also argued for the confiscation of lands owned by Japanese Americans during a time when they could not return to California. One of those cases, Oyama v. State of California, which began in 1944, went to the Supreme Court in 1948, two years after WWII had ended. Oyama v. California concerned land in my home town of Chula Vista, California. Democrat Dean G. Acheson, Secretary of State under President Harry Truman, presented the case for the petitioners to the US Supreme Court. 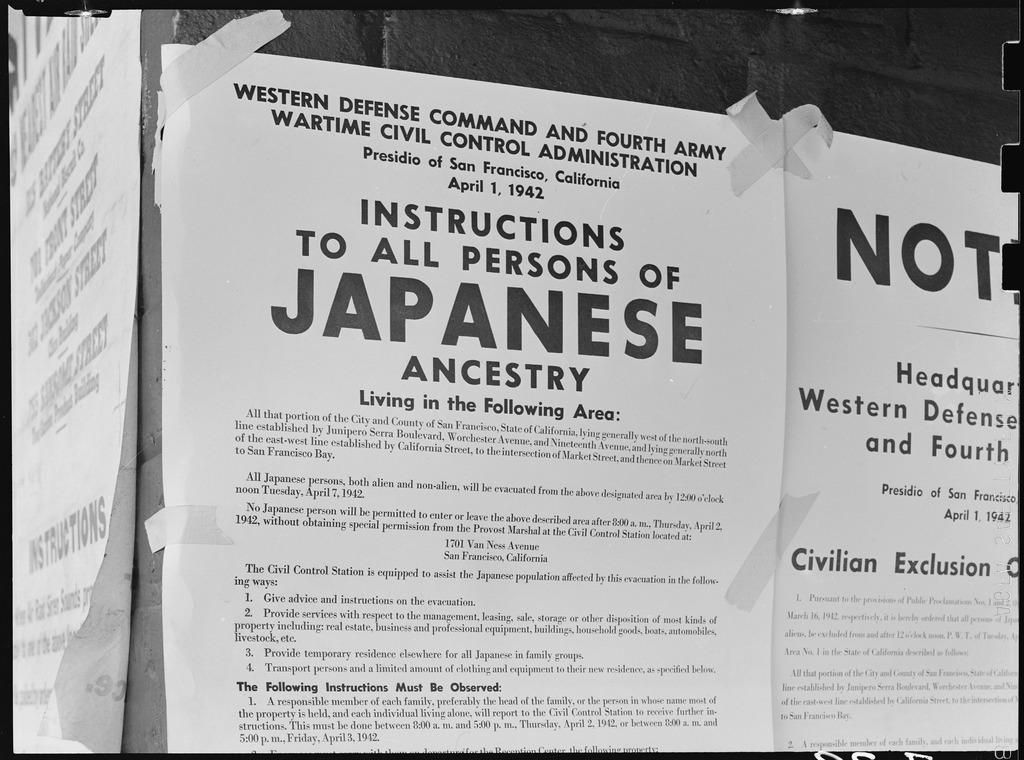 Japanese-born immigrants (and others) could not become naturalized citizens and therefore could not own land under California Alien Land Laws. However, families like the Oyamas bought land in the name of their US-born children and became guardians of that land. The US Supreme Court found in 1948 that Fred Oyama should have equal protection of the laws and of his privileges as a US citizen. The ACLU attorney who handled the case, A.L. Wirin, considered it the most important case he had ever handled “because they were able to establish principles which were the forerunners of the U.S. Supreme Court cases involving Negroes and affording them the rights to equal treatment and equal protection under the law.”

As a child, I remember being moved by the only film that Frank Sinatra directed, “None But the Brave” which I saw on TV. More recently, the upcoming film and AFI award-winner “Land of Mine” encouraged me to learn more about the aftermath of World War II. Films I consider significant to understanding World War II include:

We don’t really need movies like “Pearl Harbor” or “Allied.” There are many more World War II stories to be told on film, certainly some of the documentaries like “Besa” offer ideas. The Academy Award-winning short “Visas and Virtue” could be expanded into a full length movie and one could always remake “Go for Broke.” When I remember Pearl Harbor, I also remember there was a librarian who extended kindness to the interned children from San Diego (Clara Breed), that the town of Gallup, NM refused to detain its 800 ethnic Japanese, that Hawaii-born Japanese-American spy Richard Sakakida was awarded medals by the US and the Philippines and that UCLA alum Iva Toguri D’Aquino had to wait until 1977 for a presidential pardon.

When one remembers Pearl Harbor, one must think clearly and remember how racism colored the relationship between the US and Japan, how racism influenced the laws of that time, how sometimes religious faith was viewed as a race and a reason to send people to the gas chambers in Germany and, in the US, refuse admittance into all-white clubs or sanctuary to desperate refugees.

Warren regretted his stance much later. The Native Sons of the Golden West now includes Asian American members. Buddhism has become part of American culture with the word zen tossed around to describe everything from muffins to motorcycle maintenance. Instead, Islam is being scrutinized, but Japanese Americans have given support to Arab and Muslim Americans when internment has been proposed for them.

Not all things have changed. A screening of George Takei’s "Allegiance," on December 13 through Fathom Events represents quite a journey for Japanese Americans. During its pre-Broadway run in San Diego, CA, I took my aunt to see the musical at San Diego’s Old Globe Theater in 2012. She was amazed that the theater was packed with people of all ethnicities.

Yet just last month, my husband tells me soon after the presidential elections a truck drove through our multicultural neighborhood. A twenty-something white man yelled at him, “F*ck you. Go home.” What non-white US citizen hasn’t heard that before? And that is why diversity matters and that is why diversity in films matters, because this is 2016 and the problem of racism goes beyond black and white. Remember Pearl Harbor and remember how prejudice shaped history.