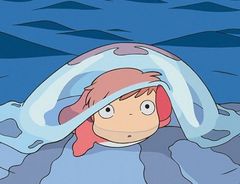 The Oscar nominees have been announced, now cinephiles everywhere have begun nitpicking amongst the nominations. Some will note those that should have and shouldn't have been nominated, but one almost criminal omission from the Best Animated Film category was the absence of "Ponyo," Hayao Miyazaki's latest work for Studio Ghibli.

In terms of filmmaking mastery, one can mention the name Miyazaki in the same breath as Spielberg or Scorsese. His works are beloved by animators, audiences, and critics around the world.

Pixar, America's premiere Animation Studio is known to hold his work above all else, so much so that its Chief Creative Officer John Lasseter (director of "Toy Story") himself persuaded Miyazaki to come promote the film in the US, and provided Ponyo's distribution under Disney.

The film tells the tale of a young magical "fish-girl" who upon wandering near the shore winds up in the hands of a young boy. The lad, named Sōsuke, names the creature Ponyo and opts to take care of her. Having cut himself while rescuing her, his wound heals after Ponyo licks it, and soon enough she begins to develop human characteristics, such as a face and limbs.

Meanwhile Ponyo's human father Fujimoto, a scientist-wizard who has lost faith in humanity, comes looking for her and takes her back to their briny domain. He forbids her to return to the surface believing that the world of man does nothing good. But Ponyo has fallen deep in puppy love for Sōsuke and is determined to return.

When she escapes to the surface, we learn what Fujimoto fears; that Ponyo's very mystical nature will cause an imbalance of worldly proportions if she is not returned to where she rightly belongs. Her mother Granmamare, the goddess of the sea, learns of this, but is more open to her daughter following her heart. She decides that Ponyo's fate will rest on Sōsuke's true feelings. 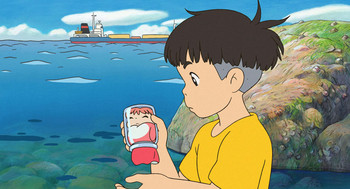 You can see how Miyazaki has reworked Hans Christian Andersen's tale to his own nature-themed sensibilities. But here, as it is with the rest of his work, his environmentalism never feels like a lecture. The worlds which he illustrates are their own pristine invitations, drawing a sense of tender awe and longing. Sōsuke's port home town of Tomonoura has never looked so unspoiled, so lively, and inviting. His drawings of the deep sea feel absent of danger, even magical.

If you thought that women were short changed in live-action films, its also the same in most animated fare. But that'll never happen in a Miyazaki film. For the last 20 years his films have been strongly feminist, all in the voices of young women or children. It's not just Ponyo whose presence fills the screen. The lives of mothers Lisa (Sōsuke's) and Granmamare (Ponyo's) are given strong focus as they both make key decisions which decide their children's fate. Even a bunch grandmas get their due here.

Speaking of which, I can't think of any director, in live-action or animation, who has such great insight into children as Miyazaki does. The way his kids talk, interact with each other, and are treated is so refreshing that any filmmaker, would do well to learn from him. Notice what Lisa does when she finds her son has lost his fish, the way schoolmates chat when something new comes around, or how Ponyo reacts when eating Ramen for the first time. You can't fake this kind of childlike naivety. 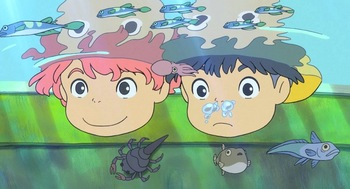 All of these things of this would be good enough for any film, yet we are also blessed with Miyazaki's boundless visual imagination. His creatures and creations are some of the most original in film, rivaled only by Guillermo Del Toro. Yes, the animation is in 2-D. So what? Was Optimus Prime more memorable in his shiny hyper-realistic gloss or as a hand-drawn autobot? Works of art are more likely to capture our reverence when it is a stylistic likeness rather than a realized fake, and in that sense Miyazaki's renderings are some of the most simple yet beautiful in all of animation. The sequence of Ponyo running through fish-like tsunami is a "Ride of the Valkyries" moment; unforgettable. Think about it. Somebody drew it.

With a Miyazaki film you won't be taught lesson, but you'll leave changed. You'll find characters that aren't merely cartoons. You'll find conflicts not confined to just good vs. evil (Even Fujimoto has good reasons to why he does what he does). You'll want to find some place a lot greener and a lot cleaner to live (or perhaps stay for a good rest). You'll see traditional animated craftsmanship and precision at its highest level. And you'll be thanking yourself for experiencing one of the few storytellers who dares to dream.

Why on earth wasn't Ponyo nominated? Did Disney not campaign enough or was the Disney name a liability? Were audiences distracted by the stars who voiced it? Or did Academy voters feel this master had won already and that's enough for a foreigner? Hayao Miyazaki once again handcrafted a classic, in a style that Hollywood seems to have abandoned. That's a shame for what might be the best animated film of 2009, and yes, even Pixar might tell you that.