The work of director Piotr Szulkin is all but unknown outside his native Poland, yet it includes some of the strongest movies ever made by a politically-minded sci-fi visionary. Seen in retrospect, they may seem but a low-fi prelude to  cinematic updates of Philip K. Dick and George Orwell made on the wealthier side of the Iron Curtain (by Terry Gilliam and Ridley Scott, especially), and yet there is a distinctive quality to Szulkin that sets him apart from just about any of his contemporaries. Working within the limited production scale his severely impoverished country had afforded him, Szulkin achieved a unity of vision that brought him close to becoming something else altogether: the best way to describe him would be, perhaps, as the undiscovered Fritz Lang of 1980s Mitteleuropa.

Asked about his major influences by Piotr Kletowski and Piotr Marecki in book-long interview (published in 2012 as “Lifewrit” [“Życiopis”]), Szulkin pointed to the trio of Eisenstein’s “Ivan the Terrible”, Fellini’s “8 1/2” and Godard’s “Pierrot le fou”, thus defining his interests as at once spectacular, visionary and avant-garde. Given his background in painting, it is not surprising his movies are amongst the most visually striking ever to have emerged from Poland: together with Andrzej Żuławski and (lesser known) Wojciech Wiszniewski, Szulkin developed a highly experimental mode, in which grotesque cruelty, wry humor and Darwinian view of society’s pecking order go hand in hand with deep insight into what totalitarianism does to human soul.

Szulkin’s first outing came with a string of boldly experimental shorts: visually arresting and varied enough to suggest half a dozen nascent sensibilities. While “Everything” (1972) and “Working Women” (1978) documented everyday labor in terms of near-abstract formal loops, “The Gal and the Fiend” (1975) and “Evil Eye” (1976) reimagined Polish folk legends simultaneously as Breughel-like tableaux and psychedelic trips to rival Sergei Parajanov. 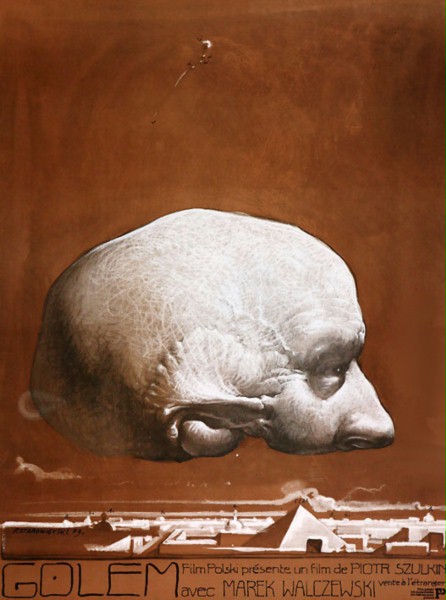 At the same early stage of his career, Szulkin shot what effectively became Poland’s first music video, documenting the progressive sounds of Józef Skrzek’s band SBB and paying homage to Godard in “One, Two, Three” (1972) and “Six Part Draft” (1973), with the latter not only introducing the talents of Krystyna Janda (later to be immortalized in Andrzej Wajda’s 1976 “Man of Marble”), but also depicting the antics of feckless Polish youth to the beat of long passages of Dashiell Hammett’s “The Thin Man”, read aloud by an off-screen narrator.

It was “Golem” (1979), however, that became the director’s feature debut. Opening simultaneously with Andrei Tarkovsky’s “Stalker” and not entirely dissimilar in its claustrophobic feel and sepia-tinted palette (courtesy of brilliant cinematographer Zygmunt Samosiuk), the film was based in equal measure on the titular Jewish legend, its Gustav Meyrink’s 1914 reworking and the collected work of Franz Kafka. Set in a futuristic world of omnipotent TV-propaganda and semi-Dickensian decay, the film proved to be a wickedly funny maze of mistaken identities, false tropes and Eastern European gloom that presages Terry Gilliam’s “Brazil” by a good half decade.

Szulkin followed “Golem” with a double homage to Orson Welles and H.G. Wells, inscribed into his disturbing vision of a media-fed society, “War of the Worlds: Next Century” (1981). Conceived and finished mere weeks before the introduction of brutal martial law in Poland in December 1981, the film seemed to have envisioned the fateful event with horrifying prescience. Focused on a complacent journalist by the name of Iron Idem (Roman Wilhelmi, famous for playing opportunistic sleazebags), the film told a story of a birth of a conscience not unlike that of Orwell’s “Nineteen Eighty-Four”. The result was potent enough for the communist authorities to forbid the film’s participation in the Main Competition at Cannes (to which it was initially admitted) and then to draw immense crowds to theaters (ironically enough, state militia used it to train its troops in the art of surveillance). 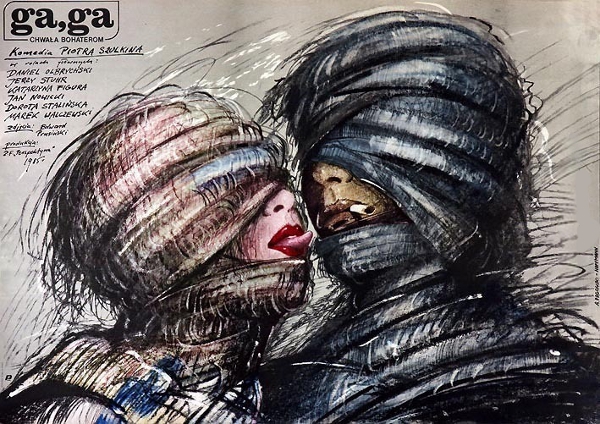 Szulkin’s two masterpieces came next, their respective titles mixing baby talk and grand statements in true Dadaist fashion: “O-bi, O-ba: The End of Civilization” (1984) and “Ga, Ga: Hail to the Heroes” (1985) owe their puzzling opening syllables to Szulkin’s baby daughter Marta (currently an accomplished evolutionary zoologist at Oxford University). As if to counterbalance this pre-lingual playfulness, the films are uniformly catastrophic in their outlook: both depict a post-nuclear wasteland, reigned by political terror and existential loneliness, indicated by the presence of Camus-like protagonists clinging to remnants of human decency. In “O-bi, O-ba”, the clueless masses await a mythical Ark in a vast bunker, and in “Ga, Ga” (inspired by Pier Paolo Pasolini’s allegorical 1962 short “La ricotta”) a planet by the name of Australia-458 organizes sacrificial killings that seem to combine “Logan’s Run” theatrics with mock-New Testament setting and Super Bowl-like cheer.

Both films were made on a shoestring budget and yet achieve a striking look: they are symphonies writ in neon, fog, and wet concrete that suggest the latter days as taking place in a poor man’s Las Vegas (think Coppola’s “One From the Heart” with half the electricity shut down). The set designs and camerawork is consistently impressive, especially in case of Piotr Sobocinski’s gliding StediCam in “O-bi, O-ba” (marking first-ever use of the device in communist Poland), traversing vast crowds of anonymous, faceless survivors of nuclear holocaust as they huddle together to munch on candy bars made of unread books ground to a pulp. (Szulkin admitted that the look of the crowds was inspired by observing his depressed compatriots riding trams and buses in the wake of the soul-destroying Martial Law.) 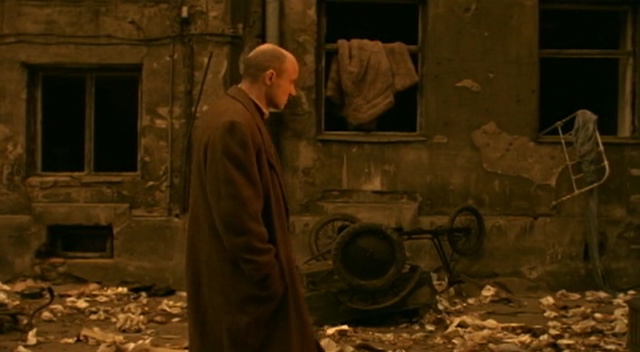 Irritated by the critics referring to him as a mere sci-fi filmmaker, Szulkin himself called his genre “asocial fiction”, pointing to his dismay at the modern society’s destruction of community, which is by no means confined to communism. In fact, Szulkin’s work can be read as well as criticism of media-driven consumerism, and is not that far away from the world depicted in David Cronenberg’s “Cosmopolis”. What’s more, the director’s contempt for television is so massive, Szulkin sees is as the single most destructive force in history of human communication (In “War of the Worlds…”, a TV set is referred to as „box of excrement in living color”, which makes Newton N. Minow’s classis “vast wasteland” speech sound almost like a praise).

It is both ironic and cruelly appropriate that, following the fall of communism in 1989 (which his films both foreshadowed and fostered), Szulkin failed to reinvent himself in capitalist Poland, working mostly for Polish TV’s equivalent of Play of the Week (where he staged a remarkable version of Bertold Brecht’s “The Resistable Rise of Arturo Ui” in 1997). Following the 1991 disaster of “Femina” (a misguided exploration of female sexuality, notable solely for the image of Joseph Stalin floating in mid-air as an object of bottled-up desire), he completed only one feature film: an adaptation of Alfred Jarry’s iconoclastic classic, “Ubu Roi” in 2003. First conceived in the early 1990s as a violent barb against the media antics of president Lech Wałęsa and the general disillusionment with what became of Poland after 1989, the film was ignored by the audience and seemed outdated even before it opened.

As for Szulkin himself, he became something of an embittered Proust-like recluse, not moving much from his cork-lined apartment and speaking openly of his disdain towards the direction both Poland and the world seem to be headed. In a way, one of his early shorts still remains his single most emblematic work: in “Copyright Film Polski MCMLXXVI” (1976), we witness an apple being slowly crushed by an inexorable movement of a press, the ensuing pulp ultimately replaced with a rotten apple – all this accompanied by two vastly differing renditions of Händel’s “Hallelujah”. What Szulkin seems to be saying is that there is no escaping destruction or decay – and that the only grace to be found in this world is that borne of heavy pressure, the way his favorite characters of Albert Camus novels sometimes succeeded in doing.

Polish Filmmakers NYC, co-programmed by Michał Oleszczyk, will present two films by Piotr Szulkin in an upcoming series. “War of the Worlds: Next Century” will be screened at Tribeca Film Center on 25 March at 7pm. “O-bi, O-ba: The End of Cilvilization” will be presented on at Columbia University on 27 March at 7pm, followed by a discussion hosted by Michał Oleszczyk. For more details, follow Polish Filmmakers NYC on Facebook.