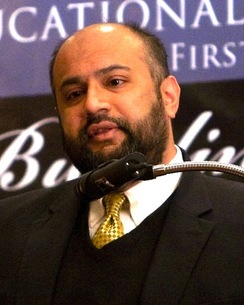 I was born in Karachi, Pakistan, at a very young age. My beloved parents rode the huge wave that was the South Asian diaspora, landing here in Chicagoland, where I've been ever since. Thus, like many of my peers, I've been in a state of constant exile.

On the South Side of Chicago, I'm a Pakistani. In the rest of Chicago, I'm a Southsider. In the rest of America, I'm a Chicagoan. In the rest of the world, I'm an American. That is today's "normal," isn't it? We are simultaneously, unintentionally local and global. Still, the most comfortable spot for me is a center seat in the anonymous darkness of a crowded theater on the opening night of a movie. If you are reading this note on Roger Ebert's blog, then perhaps you feel the same way.

As a child, my parents - new to this country - used to take me to the movies with them (rather than hire babysitters). The first movie I remember seeing was "The Exorcist"; I was about 3 years old. We also frequented Amitabh Bachchan releases at the Arie Crown Theater. I started watching Siskel and Ebert on Sneak Previews as a young grade schooler, perhaps because they were reviewing movies on Channel 11 (PBS). In all honesty, Siskel and Ebert were probably extensions in my mind of Big Bird, Oscar the Grouch, and Mr. Rogers.

Two movies that would affect an entire population of my peers were released within days of each other in May 1977 - "Star Wars" and "The Message" (a biopic of the Prophet Muhammad, may peace be upon him) - and that pairing defines the symbiotic path that my life has taken since then: Movies and Islam. So, not only was my identity simultaneously local and global, my outlook was simultaneously permeated with movies and Islam. [Continues below video]

...The events of the past quarter century have compelled many of my Muslim American peers to make conscious decisions about their/our Islams. Consider being a young Muslim man or woman growing up through news reports about the First Intifada of the Palestinians, the Salman Rushdie affair, Not without my Daughter, Saddam Hussain's invasion of Kuwait, the Gulf War and subsequent decade long sanctions on the Iraqis, the genocide of the Bosnians, the release of Spike Lee's "Malcolm X," "WTC 1," the release of "Schindler's List" (not only because of its topic but also because Steven Spielberg spoke about the Bosnians), the Chechen war for independence from Russia, the Million Man March, the atrocities against the Albanians of Kosova, the rise of the Taliban, the arrest of numerous Muslims and Arabs under the bizarre Secret Evidence laws, the Second Intifada, the Muslim bloc-vote for George W. Bush in 2000 (specifically because he promised to repeal Secret Evidence).

Then, of course we had 09/11/01, John Ashcroft and the PATRIOT ACT (far worse than Secret Evidence), the so-called War on Terror, the lies involved in perpetuating the War, and most recently, the election of an African-American president named Hussein (who is constantly "accused" of being Muslim), from the South Side of Chicago.

Now, this list is definitely skewed and simplistic; the point here is to illustrate what is playing in the media from the perspective of a young Muslim man: it is a constant onslaught. The result is that many young Muslims felt rather pressured to choose to retain, reshape or abandon their Islams. In a nutshell, it was a tornado in the heart. What did I do? Well, I would like to sound tough and say something like: not only am I from Karachi, but I'm from Chicago and thus put on my Islam helmet and ran headfirst into the fire. But, my active relationship with Islam wasn't made after 9/11. Rather, all the way back in 1993 I was sitting in a cafeteria at Stateville prison in Joliet (Illinois), as an extra for Oliver Stone's "Natural Born Killers," and decided to read the Qur'an. It was that simple. When you're an extra in a movie, you sit and wait. And wait. And wait. So, you sit there and think. And chat. And think. And, I decided to read the Qur'an. And, while the narrative structure of the Qur'an has left many westerners scratching their heads, seeking from it a Biblical/Classical structure, for me it was a perfect fit: I had already so thoroughly embedded a film-editing outlook to my outlook, the Qur'anic narrative not only seemed to match, it also informed my understanding of film. In my mind, to this day, it is hard to separate the two, as though they are that different. More than common narrative style, however, the two gave me sukoon (tranquility). 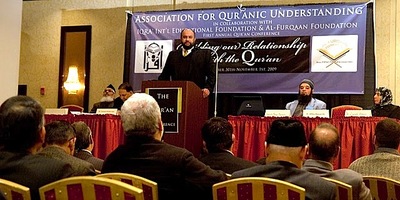 In the years since 9/11, I've been called upon to give lecture upon lecture to audiences across the country seeking to learn about Islam. I stopped counting at 200 lectures, including as many as 5 in the same day at 5 different locations. It is not easy. It is easy to speak about film. But, when speaking about religion as a believing practitioner, you have to keep from falling into hypocrisy, preaching what you do not practice. And, that in itself is next to impossible, especially with my own shortcomings in character. But, when speaking about Islam, the responsibility goes a step further: you are often expected to apologize for the atrocities committed by others. There was a strange moment. In 1994, I was a film student at Columbia College Chicago and frequented the Downtown Islamic Center. One Friday, two Rabbis visited the Center. They came to condemn the actions of an Israeli Settler who walked into a mosque of Friday worshippers in Hebron and opened fire. Sitting there, I wondered why they needed to express their outrage, considering that anyone with any sense knew that Jews would never condone such an action; the outrage is assumed.

But, in these years of giving these (at times exhausting) lectures I have grown to understand that even though people know that your belief system calls you to the highest standards of character, they need still need to hear it.

I have been an instructor at the University of Chicago (incidentally in the same department where I first enrolled in "Film Study with Roger Ebert" so many years ago), and I have been a part-time professor at various colleges across the city in the past half-decade. In these years of lecturing, if I have discovered one thing, I have discovered that people need to see your humanity; people need to see that you invest your humanity in their humanity. People need for their hearts to be satisfied. People know your inherent goodness, but they still need to hear you say what they need you to say, for their hearts to be satisfied. And, the fact is that there are plenty of opportunists who find profit in vilifying you and/or your beliefs. In our increasingly shrinking, globalized world, we know that we are also becoming increasingly polarized and distant, forgetting that value of the human heart.

And, that brings me full circle. My heart races when I see a beautiful moment of cinematography. My heart races when I notice an excellent edit. My heart races when an actor or actress exercise the craft. But, when film takes me to worlds beyond my imagination it is far more exciting. And, when a movie takes my in-exile self into new worlds within the human heart, showing me dimensions of humanity and the human experience, it is as though the Divine is whispering through these visions of light.