Matters of Heart: On "The World of Us"

Besides being one of the best South Korean films of last year, “The World of Us” distinguishes itself as one of the most insightful movies about kids in recent years. Closely observing its young heroine and her dynamic relationship with a new friend, this small but superb coming-of-age drama film immerses us into her small world via its simple, unadorned storytelling approach, of which wonderfully unadulterated moments let us understand and emphasize with her. While it is often amusing to watch how innocent she and other young characters around her are, it is also gripping to observe how intense they can be about their matters of heart. I can only admire how the movie deftly swings across the spectrum of many different feelings as never losing its subtle, sensitive touch.

Its young heroine is an 11-year-old girl named Seon (Choi Soo-in), and the opening sequence gradually reveals this shy, introverted girl’s aching unpopularity among her classmates. When her classmates are about to play dodge ball together in the school playground, she anxiously waits to be picked by either team, but she is reluctantly picked at the last minute, and her play time does not last that long. When someone says she stepped out of a line, everyone except her concurs, even though she insists she did not.

In the next scene, Seon tries to approach closer to Bo-ra (Lee Seon-yeon), a popular mean girl in the class who is usually surrounded by her class entourage. She does not give a damn about Seon unless she ridicules Seon. After making a rather transparent attempt in front of Bo-ra and other classmates, Seon manages to get an invitation card for Bo-ra’s upcoming birthday party, but, not so surprisingly, there later comes a painful moment of embarrassment and rejection. 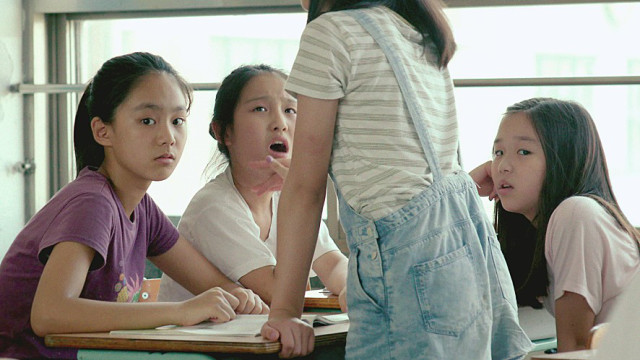 Meanwhile, when she is about to leave the school on the last day before summer vacation, Seon comes across a student who has just been transferred to the school. She is Ji-ah (Seol Hye-in), and it turns out that she is assigned to Seon’s class, though it is already too late for her to introduce herself to her new teacher and classmates. Not long after this brief encounter, Seon and Ji-ah come across each other outside their school, and they quickly befriend each other mainly because both need someone to hang around with during their summer vacation.

Seon certainly feels happy and excited about this unexpected chance of friendship. She and Ji-ah become closer to each other as long hot summer days pass by, and Seon manages to persuade her mother to allow Ji-ah to stay at their modest apartment for several days. When Seon’s mother is late due to her work, Seon serves the dinner for her little brother and Ji-ah, and that is one of the warmest moments in the film.

However, we cannot help but notice how much different Seon and Ji-ah are from each other. When Seon goes to a house where Ji-ah lives with her grandmother, Seon is impressed by how it looks far more affluent than her humble family home, but Ji-ah casually tells her friend that her grandmother’s place does not look that good compared to where she lived before. Although Seon’s family is not dreadfully poor, the movie subtly implies a considerable economic gap between Seon and many of her classmates via her plain attire and appearance as well as her parents, who are frequently busy with their respective menial jobs.

As their summer is being over, the situation becomes complicated. As the child of a divorced couple, Ji-ah feels envy and jealousy as glimpsing the intimate relationship between Seon and Seon’s mother, and Seon feels hurt and confounded by her friend’s changed attitude. They drift apart from each other when Ji-ah comes to spend more time on her study as her grandmother demands, which is followed by an unexpected dramatic moment when Seon comes across the last person she wants to be around her and Ji-ah.

The distance between Seon and Ji-ah is further increased when new semester begins at their school. As a new girl in the class, Ji-ah instantly draws everybody’s attention, and that accordingly makes her look like someone to get along with to Bo-ra and her cronies. As Ji-ah hangs around with them, Seon finds herself reverting to her usual ostracized status in the class, and one particular scene involved with a box of colored pencils is as difficult to watch as those vicious school scenes in Todd Solondz’s “Welcome to the Dollhouse” (1995). 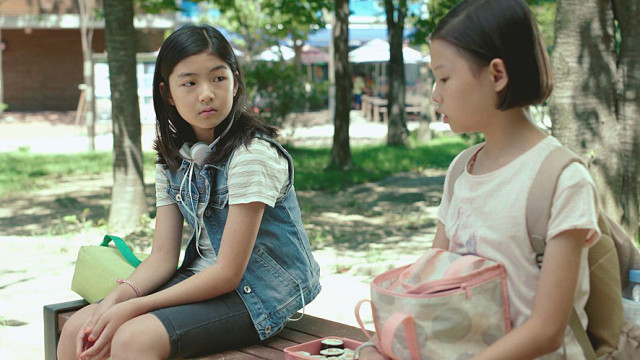 And this is just the prelude for numerous emotional fluctuations to be shown during the rest of the story. The movie carefully builds up its momentum behind its leisurely narrative, and its third act will probably brace you up for sheer raw emotions unleashed on the screen. As one clash leads to another one, nobody is totally innocent in this circumstance, and we are reminded of how cruel and harsh kids can be to each other sometimes as driven by their strong emotions.

The success of the movie lies in how it aligns itself well with Seon’s limited viewpoint. As the camera is usually placed around her eye level, we come to pay more attention to what she thinks and feels, and the movie subtly conveys Seon’s thoughts and feelings to us via small details including dyed fingernails. In case of Ji-ah and Bo-ra, they are presented as understandable three-dimensional characters rather than broad stereotypes, and the movie surprises us at times as revealing how they are as emotionally insecure and vulnerable as Seon or any kids around their age. I noticed that there are several boys in Seon’s class, but they are not shown much in the film probably because, well, our girls still need to grow up to be more interested in boys.

We also get to know a bit about minor adult characters at the fringe of the story as they are glimpsed through Seon’s viewpoint. While his ailing father is currently spending his few remaining days at a hospital, Seon’s father adamantly refuses to see him again, and we can only guess the reason as indirectly listening to his bitter conversation with his wife. Although the movie does not delve much into how Ji-ah’s parents came to divorce, one brief scene shows Ji-ah’s father and his new wife, and it is apparent to us that Ji-ah is not very happy about her father’s second marriage. 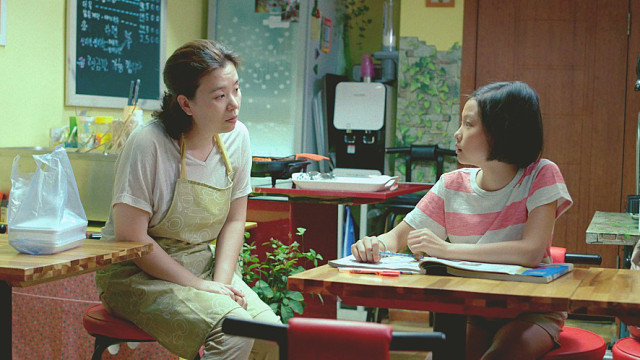 Director/writer Yoon Ga-eun, who previously received the Crystal Bear Award for her sublime short film “Sprout” (2013) at the Berlin Film Festival, did a commendable job of drawing natural performances from her three talented young performers. Choi Soo-in and Seol Hye-in are spontaneous as their characters pull or push each other on the screen, and Lee Seo-yeon is also fine as another crucial part of the story. While the adult performers in the film take a backseat as required, Jang Hye-jin deserves to be mentioned for her work as Seon’s hard-working mother; she has a nice scene where her character patiently tries to understand what is troubling her dear daughter lately.

The movie is very humorous from time to time, and its humor mostly comes from Seon’s little brother Yoon, played by adorable young performer Kang Min-joon with a bouncy innocence that will win your heart right from his first appearance. During a certain crucial scene, Yoon says something so simple and so true to his sister, and I was both touched and tickled as appreciating how this scene is effortlessly handled and then resonates with the following scene. It reminds me again of what Roger Ebert once said about that consistently excellent quality of child performances in movies: “Maybe we are all born as great actors, but after a certain age, most of us morph into bad ones.”

While very specific in its background and details, “The World of Us” feels universal nonetheless as handling its story and characters with a lot of care and honesty. Sure, kids may make many big mistakes as being angry and inconsiderate, but they usually learn from their mistakes as growing up day by day, and the last scene of the movie makes a good point of that while functioning as an almost perfect ending for its story and characters. Sometimes kids can do better than us, you know.