Losing face to your enemy 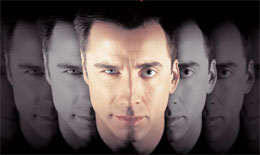 The plot in "Face/Off" (1997) may sound ridiculous in real life terms but allowing our imaginations to experience and accept such preposterous events, the kind none of us will ever be able to live through, is a prime example of the great feats that cinema can achieve. And what a fantastic concept "Face/Off" had to begin with. There have been recent features where I've had a hard time grasping how boardrooms full of film executives could possibly green light the spending of millions of dollars when being pitched ideas that no filmmaker, however talented, could ever have succeeded with ("A man cures his depression by talking to a puppet beaver!" "A young archer princess grows closer to her mother when a witch turns her into a bear!").

In contrast, the premise in "Face/Off" must have sounded difficult to mess up. Here's a movie whose title accurately describes both the showdown between two giants and the actual ripping-off of their faces, with a story that was tailor-made for the outrageous twist and turns that many current movies try to pull off, but few successfully can.

"Face/Off" deals with a master law-enforcer, his hated arch-nemesis and the circumstances that force them to switch faces, friends, associates and (almost) personalities. After years in pursuit, detective Sean Archer (John Travolta) has finally catches up with master-terrorist Castor Troy (Nicolas Cage) and as the latter tries to flee, he is crushed and slips into a coma. As he lies sleeping, the information about a bomb that's set to explode and potentially kill thousands remains secret, forcing Archer into accepting a procedure that will allow him to borrow his enemy's face, allowing him to gain the confidence of Troy's equally evil (and just as memorably named) brother Pollux (Alessandro Nivola), who he'll join in prison for that purpose.

The plan has to be kept secret from everybody but a select group (what could possibly go wrong here?), meaning that when Castor inevitably wakes up, he'll have Archer's wife and daughter at his disposal as well as the guy's law enforcement job -- all while his hated enemy is locked up for the next hundred years.

Dealing with a plot of this nature usually means having to accept numerous absurdities. Here are some of the questions that I can't help but wonder about: Wouldn't the protagonists' friends and family easily recognize them when looking at the back of their heads? How can Cage's slim face fit onto Travolta's clearly wider head? (A brain transplant might have been easier to pull off.) Wouldn't Archer's wife notice any differences in her husband's body? At any rate, however far-fetched the story may be, the performances by both leads manage to sell it to the audience. Since both of them seem to believe it, we end up believing it as well. Think of the effect of the excellent scene early on, in which Cage has to convey the horror in Archer's face when first looking at his enemy in the mirror. This sequence alone seals the plausibility of such a surgery in our minds.

One of the best things about the film is how it places its protagonists in wildly unpredictable situations: Travolta (in his best, post-"Pulp Fiction" form) cracks jokes about his own "ridiculous chin." Castor does a variation on the "villain killing one of his own men" convention that becomes an unexpected display of brotherly love (tying the "kid's" shoelaces and all). Cage as Archer finds himself in a situation where he has to imitate his foe (Castor) in order to pass for him, which means he has to convey convincingly that's he's making an effort to emulate himself. Both characters start as opposite reflections on one another and end up becoming intrinsically mixed up.

The new evil Archer becomes more likeable to his wife and fellow officers (unexplainably killing his former best friend). The new, kinder Troy grows close to his foe's accomplices. The void left in Archer by the murder of his son is filled with the child of the very same man who killed him (though this kid looks nothing like the offspring of his screen parents, played by Cage and Gina Gershon).

Woo's directing style and usual cinematic idiosyncrasies are a perfect fit for this material but he spends a good deal of the time testing our patience with their constant presence. Fireworks explode (literally) whenever objects crash and bullets hit anything. Doves maker their appearance in mind-boggling numbers. I love such nonsense as the villain having an accomplice whose sole function seems to be carrying a box with his golden-plated guns, and his bubble gum, but Woo never seems to know when to quit.

"Face/Off" is like a two-hour exercise in the application of "the fallacy of the talking killer," where each enemy has the other one at his mercy but time and time again they let him escape. The several hundred bullets that each of them shoot at each other without hitting their mark must constitute some kind of record and they make it hard for the viewer to be concerned about them ever being in any real danger. The same applies to his laughably complicated Mexican stand-off that comes late in the picture, after the leads have switched faces and alliances to a point where it's hard to remember who's on whose side anymore. Woo seems well-aware that this material is ludicrous to the point where handling it in a serious fashion would never have worked but sometimes he acts as if trapped by his own trademark traits. Here is a guy who, if he done "JFK," Oswald would have surely have used two rifles.

"Face/Off" is one of the most over-the-top and unbelievable films in memory, but this doesn't make it any less entertaining. Just think of this: one of the world's most famous and hunted terrorists sings and dances in front of a crowd of hundreds in the same building where he's just placed his secret device (wouldn't that be the first place for the police to look?). His accomplices hide in a building that features gigantic windows, allowing the police to follow their every move (all that's lacking is a marquee). Archer (with Cage's face) escapes from a prison located in the middle of the ocean by jumping into the water in plain daylight, but the pursuing helicopter fails to find him. Castor (with Travolta's face) disables one of those cinematic "impossible to disarm" explosive devices and nobody questions how he could ever have done it in just a few seconds.

I also have trouble accepting an ending that ties things up too nicely by allowing for Archer to go back to his old life when the movie has already established this wasn't going to be possible anymore. My guess is that Woo realized the audience has already gone through enough mayhem and felt obliged to deliver a happy ending at all costs. Whatever the case, "Face/Off" is an incredibly kinetic picture with more action scenes and stunts than several features put together (certainly more than it needed). It has some remarkable images like that of a man flying in a wind tunnel to his alleged death or the one where Cage's Archer discovers he's been visited in jail by... himself. Despite countless "roll your eyes moments," the movie undeniably works.

At the end of the day, are all the kinks I mentioned above relevant? In his "In the Cut" articles, Jim Emerson discussed some time ago the occasional fakery that some directors like Philip Noyce and Christopher Nolan used in films like "Salt" and "The Dark Knight" in order to make their action scenes as spectacular as possible, by occasionally stretching and even disregarding logic. Woo clearly is in a class by himself in this regard. There's a sequence outside a church in "Face/Off" where Travolta (as Castor) shoots at his enemy with a machine gun and when the bullets run out, he throws it away and pulls out a revolver that inexplicably keeps on firing ammunition as if it were an automatic weapon. There's another in which a SWAT officer steps into the villain's lair and shoots forward, but the bullets are seen traveling straight up in the air to destroy a glass ceiling.

Some of these goofs are due to shabby or lazy editing but I have my doubts Woo is too concerned about their presence. There's so much going on that it would be almost impossible for many viewers to keep track of such details. When I studied architecture years ago, I remember being surprised when first noticing how people at school would take liberties in re-drawing the predefined measurements of the properties we were assigned for fictional projects, so as to come up with better solutions. Looking back, this was only natural -- after all, nobody ever checked their accuracy. The same applies when someone like John Woo takes cinematic liberties, of the sort that whenever I write about them on my own blog, it's not uncommon to receive comments like: "Get a life! " and "Who cares?. Perhaps most audiences just want to be entertained with an intriguing, well-told story and even though I believe these flaws do keep "Face/Off " from reaching the next level, the film's biggest merit is managing to make them feel mostly inconsequential.