Lives across a great divide 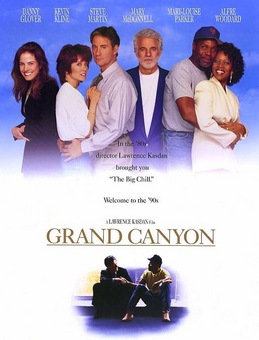 Lawrence Kasdan's "Grand Canyon" didn't make a splash when it opened here in Mexico, and it's not the kind of feature that's ever shown on our TV, so hardly anybody I know has even heard about it. It's not an easy movie to describe. When people ask me about its subject, I say something like "It's about a group of people from Los Angeles living in despair who end up feeling better when they all get together and visit the Grand Canyon." Most of them seem to loose interest but the response of those who do see it is mostly overwhelming.

Watching "The Tree of Life" brought "Grand Canyon" to mind. The films couldn't be more different, but both deal with a search for a deeper meaning in our existence-- a sense of helplessness in trying to place ourselves in the grand scheme of things. They also lack defined plots or conventional structures.

"The Tree of life" is a depiction of life in an idealized American small town of the 1950s, and "Grand Canyon" does the same for a radically opposite big city of the '90s (which 20 years later doesn't seem to have changed much). Without getting too deeply into "Tree," I'll say I felt more of a connection with the older movie. Maybe it's easier to identify with "Grand Canyon" when you come from a big, complicated city as I do; and maybe those from smaller towns will tend to prefer "The Tree of Life." I realize this can hardly be called a general rule.

"Grand Canyon" is another one of those films about intertwining lives in which all characters don't necessarily know one another but have at least one person in common with the rest, much like "Pulp Fiction" and "The Bank Job" years later. It doesn't follow any single one of them throughout, and is mostly made of brief scenes that could be described as vignettes. There's no definite central figure but Mack (Kevin Kline) comes closest. He has a little more screen time than the rest. He's an immigration lawyer, husband to Claire (Mary McDonnell) in a marriage that seems perfect in every way, until we witness as it gradually reveals deep cracks, The film starts with Mack being rescued by Simon, a towtruck driver (Danny Glover), in a truly unnerving scene as he loses his way while coming back home from a Lakers game and ends up in the middle of dangerous gang territory.

Simon isn't sophisticated or highly educated but he happens to have the right background, demeanor and good-will, all indispensable in getting them both unharmed from such a situation. Mack is also best friends with action film producer Davis (Steve Martin), whose views on life are shallower than either Simon's or Mack's, until he learns the hard way that the gruesome movie shoot-outs he loves to film don't have much relation to what a single bullet can do in real life.

These three main characters and their loved ones all live in the same large, dehumanizing city and are even seen enjoying the same TV shows in their very different surroundings. This doesn't mean that life's conditions for Mack and Davis are even remotely close to Simon's and yet the first two seem drawn to each other by a mutual likability and similar lifestyles, while Mack and Simon (who've only know each other briefly) appear to share the same values and views of life. Regardless of their sex, color or social status, every character in the movie feels equally overwhelmed by his own problems. The viewer will likely find these more serious or trivial depending on their own personal experiences.

Mack's marriage to Claire has everything that a great union aspires to: a beautiful house, a successful practice, a terrific son and what seems like plenty of love (though it's a wonder that Mack does so well, considering he spends most of his day worrying about human relationships). When Claire runs into an abandoned baby, she becomes to be aware of voids in her life and the fact that there might have been something wrong all along. Mack appears extremely able at making others happy but he can't seem to be able to do a very good job for Claire or for the other woman in his life, Dee (Mary-Louise Parker), the assistant with whom he once had a one night stand.

Dee's obsession with Mack has her constantly trying to make sense of what is clearly a dead-end in her life and as a result she lives in constant despair. For someone who spends most of her on-screen time whining, Parker makes Dee a surprisingly moving character. She may also have the movie's most memorable line ("do you ever feel like you are just this far from being completely hysterical twenty four hours a day?). In contrast, Simon has lead a much rougher life than the rest but is still able to keep things in perspective: "...some terrible things are going to happen to you and some good things too, but you can always count on the terrible." He seems happy and resigned to a point where he avoids messing with destiny, initially rejecting Mack's banal tries to thank him and make his life better. They will end up changing it radically for the best anyway.

Despite its overall pessimism, one of the most charming aspects about the script is how it's able to constantly surprise us with unexpected happy moments, such as Simon begrudgingly going on a blind date that turns out to be a life-changer for him and Jane (Alfre Woodard). The question that "Grand Canyon" constantly poses is whether such occurrences happen for a reason or are pre-ordained from above. It also considers the possibilities that they constitute miracles, destiny or pure luck. Are some of the people around us angels in disguise, delivering heavenly messages and saving us from doom? Whatever the case, the characters seem to think that by constantly scrutinizing the good and the bad, they will be able to stop the inertia in their lives, which they feel helpless about.

The constant presence of a helicopter hovering over the city seems to represent a force watching over the characters. It may also mean they feel as if being constantly chased, especially considering there is a constant "running theme" throughout the movie. Some, like Simon's nephew Otis, are trying escape from their harsh reality. Others, like Claire and Mack, are seen in their dreams going after answers to the matters that torment them. Dee is depicted aimlessly moving in the city's dangerous streets, trying to come to grips with her obsessions.

James Newton Howard's excellent score accentuates this constant sensation of movement and by the end they will all seem to have reached goals of sorts. Dee will be the first one to do so by realizing the existence of alternative paths to living the kind of life she aspires to. This is accomplished in a scene separate from the rest of the cast as it's impossible to imagine her meeting Claire without the latter becoming instantly conscious of her affair with Mack.

The audience is never given much of these character's backgrounds but the script allows for us to eventually understand them in the brief time that we get to spend with each. Case in point: in the early scenes we feel an anger and repulsion toward the gang of black members who try to pick on Mack and yet later we become aware of the predicaments that lead Otis into joining a similar group--a tragic fact we come to see as almost inevitable. The cast is uneven but they all have great chemistry and we end up caring a great deal about all of them. As a result, when we see them arriving at the Grand Canyon together, we grasp why it is the right place for them to find the soothing effect they seek and help them put their problems in perspective. We realize they likely will end up doing well.

Despite the similarities between both films, watching the "The Tree of Life" for me was like staring at a photograph of a lovely family with a beautiful background. In contrast, "Grand Canyon" allowed me to fully appreciate what its characters are living through; still, both are great examples of "it's not what the movie is about but how it is about it." Despite the absence in "Grand Canyon" of a more defined theme (as in Kasdan's better known "The Big Chill"), this film from him feels less forced and more believable. Midway through the film, Claire mentions to Davis "there's a fortune to be made in stories about real life's forces." Few movies are able to remain as contemporary and relevant twenty years after their original release as "Grand Canyon."