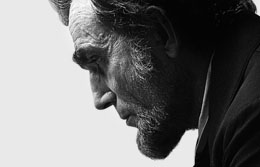 "Lincoln," a new movie directed by Steven Spielberg, overflows with talk, large chunks of which are delivered by the titular character. It opens, however, with an instance of Lincoln listening. After a brief outburst of violence, which allows us to witness the Civil War strife in all its mud-drenched brutality, four soldiers of various ranks and differing races casually approach the sixteenth President and talk to him. Their demeanor varies, running the gamut from celebrity-struck goofiness ("Hey, how tall are you?") to brave political confrontation by a Black corporal, demanding equal opportunities for a military career. And yet, as the scene closes, the soldiers end up literally speaking in Lincoln's words. By showing they have memorized the "Gettysburg Address," they give the ultimate proof of political trust in one's leader: they allow Lincoln's mind to merge with their own.

Given the anticipation that surrounded the film (and its central casting) from the early stages of production, Spielberg's way of delaying the first glimpse we get of Lincoln is a knowing way of teasing the audience. (This is, after all, a movie by the man who made us wait -- and wait -- to see the shark in "Jaws.") However, that brief opening tease is also something more, for the entire film is founded on withholding things we expect to see. It's a movie concerned with war, and yet hardly ever shows it directly. As the battle of Wilmington proceeds, we're far from the fighting and have to make do with telegraph tapping instead of gunfire. As for Lincoln's fatal shooting, it's absent altogether -- when we learn the news of it, we're at a theatre, but a different one than the President. Given Spielberg's flair for action and movement, one has to admire his restraint: I bet his sequence of John Wilkes Booth making a stage-bound leap, breaking his leg, screaming "Sic simper tyrannis!" and running away would have been a thrill to watch. Still, it would fit only in a different movie: one not as interested as this one with people talking, listening, talking some more -- and making history in the process. 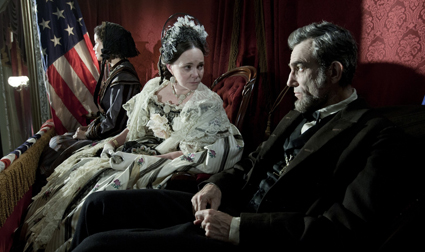 For this is "Lincoln"'s subject: making history by means of establishing laws. Spielberg attempted a period courtroom drama before in "Amistad" (1997), but the story told there -- that of a group of supposed slaves being proven free -- didn't have the historic resonance of the constitutional change that made all American slaves free. This time, Spielberg tells the story of passing the Thirteenth Amendment to the Constitution -- the one abolishing slavery on federal level -- and of all the guts, cunning, and insight it took to do so. He also tells a story of compromise: of phrasing one's cause in a way that won't enrage one's opponents too much, in order to win what can be won at the moment. The scope of the film is a mere four-month period, but its attention to legal and political detail is fierce.

Daniel Day-Lewis had some large shoes (as well as long pants) to fill as Abraham Lincoln. Actors as different as Joseph Henabery, Raymond Massey and Henry Fonda all gave commanding performances in the same role, even if the films in which they starred -- "The Birth of a Nation," "Abe Lincoln in Illinois" and "Young Mr. Lincoln" -- were wildly different: not only from one another, but from "Lincoln" in particular. Spielberg attempts something very ambitious in his movie: without making a traditional biopic, he still tries to do justice to a great man's complex nature. By showing Lincoln interacting with a variety of characters (both in public and in private), the movie aims at presenting the main character as a complete man -- not merely a political player, but also a father, husband and companion, whose personality traits and ailing body all play a part in the way he approaches politics and the world. Sally Field's fantastic performance as the President's wife, Mary Todd Lincoln, helps to drive the point home: this Lincoln may be an icon, but he's also capable of being a grouch. 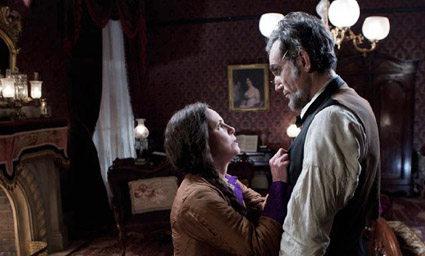 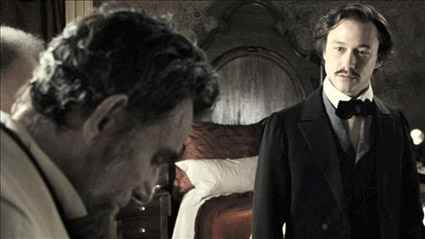 And yet, for all its humane interest in the main character's emotions and contradictions, there's no denying the film is never less than reverential towards Lincoln -- as well it should be. It is with a palpable sense of respect that Spielberg directs (many) scenes of his speeches and anecdotes: as the camera fixes itself on Daniel Day-Lewis' physique, one can feel those around him hush down and listen. There are scenes in "Lincoln" that play almost as a form of direct address to the audience: thanks to Tony Kushner's excellent writing and Spielberg's willingness to submit to its rhythms, there's enough footage here of Day-Lewis' speeches to make for a separate movie, along the lines of "Give 'Em Hell, Harry!" or -- very different in tone -- "Secret Honor." 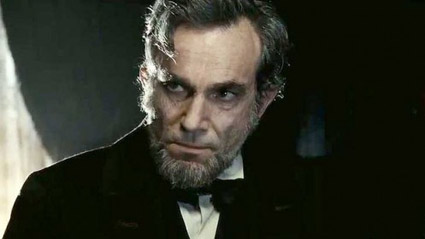 In more ways than one, Spielberg is threading familiar territory in "Lincoln." His movies often tell stories of dreamers whose imagination transcends their surroundings (think of Lincoln's seemingly mad resolve to push the amendment as a continuation of Richard Dreyfus' drive in "Close Encounters of the Third Kind"). He's also no stranger to worlds being ripped apart by conflict, and "Lincoln" is about a war of two worlds as much as his adaptation of H.G. Wells was -- although on different terms. This may be the most shut-down, outdoors-adverse film in Spielberg's career, but what happens in closed rooms in "Lincoln" has consequences for the whole of United States, as well as the world at large.

All this is not to say the film doesn't occasionally falter. There are clumsy bits of business, most of them having to do with the process of persuading lame-duck representatives to support the amendment. A team of designated vote-swingers, headed by the all but unrecognizable James Spader, perform a feat of what is currently known as "networking," securing votes in exchange for positions and financial gain. While it's fascinating to see those men scan the House of Representatives for the slightest sign of irresolution (as they try to determine who to approach), it's very disappointing to watch many of their subsequent encounters rendered in unfunny montages, filled with ineffectual pantomime and even botched slapstick. At moments like these, "Lincoln" comes dangerously close to playing like a version of yet another movie about building a team of supporters for a noble -- albeit infinitely less historic -- cause, namely "The Blues Brothers."

Even if not perfect, "Lincoln" is still one of the most moving political films of the recent years. My favorite scene is the one in which Lincoln has a long discussion with the radical abolitionist Thaddeus Stevens (Tommy Lee Jones, as fierce and eloquent as he was in 2011's "The Sunset Limited"). Both men agree in principle and realize their ultimate goals are identical -- it's just that Lincoln is more of a realist when it comes to the down and dirty world of politics. At one point the President likens a moral intuition to a compass: always pointing in the right direction, but unaware of possible swamps and obstacles ahead. A visionary politician has to allow for a swamp or two to cross, and "Lincoln" defines the swamp as populated with folks lacking imagination. Which is, ultimately, a very Spielbergian thing to do.