Frederick Wiseman’s “National Gallery” takes me back to fond memories of visiting many wonderful museums. While it merely seems to look around those beautiful paintings and many other things in the National Gallery in London, this exquisite documentary film gradually lets us follow its subtle but captivating flow of engaging and informative moments. The whole picture assembled through these moments is a vivid, insightful presentation of one of the most valuable art museums in the world.

The National Gallery in London was built by the British government in 1824 for the 38 paintings purchased from the heirs of John Julius Angerstein, an insurance broker who was well-known as an art patron. Since its establishment, the museum has built up its considerable reputation as collecting more paintings, and it currently owns around 2,300 paintings dating from the mid-13th century to 1900, which put the museum on the prestigious rank belonging to a few other world-famous art museums including the Musée du Louvre and the Metropolitan Museum of Art.

After a quiet opening sequence which shows the early time in the museum before its opening hour, we soon see its halls and rooms being populated with many visitors. We often listen to their knowledgeable docents’ brief lectures as the camera looks closely at numerous works by various artists such as da Vinci, Michelangelo, Titian, Velázquez, Caravaggio, Vermeer, Holbein, Rembrandt, Rubens, van Gogh, Seurat, Cézanne, and Turner. We come to learn a bit about the artistic details and values of these invaluable masterworks, while also marveled by their undeniable beauty which has been preserved for many years.

This part of the documentary is like a pleasant, leisurely stroll with many awesome things to appreciate. While I was amused by an anecdote behind Holbein’s portrait of a Danish princess who could have been the fourth wife of King Henry VIII of England, I was fascinated with the emotional ambiguity glimpsed from Rubens’ painting of Samson and Delilah, and I also became more interested in George Stubbs after learning about painstaking efforts behind his fabulously dynamic painting "Whistlejacket." In addition, we are reminded at one point that Angerstein’s enormous fortune, which was the origin of the museum, came from many insurance deals on slave ships.

Although they are not directly introduced, several docents in the museum become familiar to us as we see more of their working time throughout the documentary. As a female docent vividly describes to a group of visitors on how one medieval altarpiece might have looked during its time, we come to look closer to this altarpiece while listening to her words. One male docent passionately explains to young curious visitors about how he became interested in art, and then, via one very good example, he demonstrates how a painting can convey so many things together. While the painting in question shows the murder of a famous saint in the foreground, we cannot help but notice those woodcutters in the background, and their indifferent attitude reminds me of that familiar catchphrase: “So It Goes."

Meanwhile, the other sections of the museum show us how museums do far more than merely exhibiting artworks on walls and floors. We observe a number of arts classes in the museum, and one of them shows us how the museum tries to reach even to blind people, who may be the last people you can imagine visiting galleries but, believe or not, can appreciate paintings in their own way as shown during one scene. In case of two individual drawing classes, we observe that students draw their nude model sketch through each own method and material, and that resonates with what the aforementioned docent says to his young visitors: “The reason why I like art rather than math, although they are connected somehow, is that in art, you can be correct in lots of different ways, but in math, you can only really be right once, otherwise you’re wrong.” 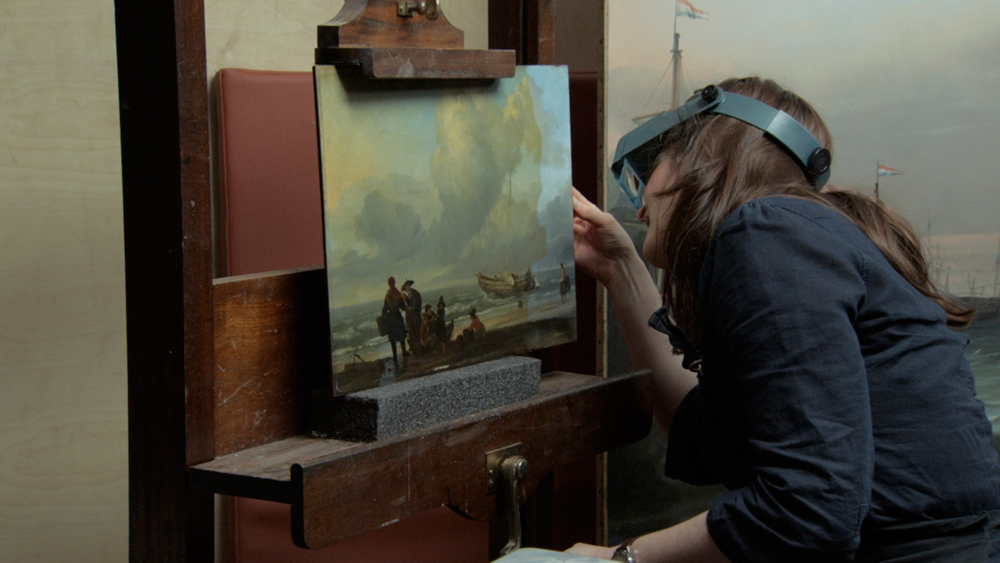 Somewhere in the museum, we see a painting frame being carved meticulously and then covered carefully with thin gold wafers later. We also watch several technicians in the conservation laboratory carefully working on the paintings in the need of restoration and preservation. In case of one Rembrandt painting, its restoration process happens to reveal an unexpected secret hidden behind the painting, and this finding wonderfully exemplifies why the restoration of an artwork is not just confined to the simple preservation of how it originally looked from the beginning. Everything from pigment to varnish is thoroughly considered during the restoration process, and one expert points out that their restoration work is not permanent at all. Paintings are bound to be deteriorated right from when they are created, and it is also important to leave some space for the further restoration process in the future.

We also look at the occasional administration staff meetings of the museum. While they often disagree with each other due to their different opinions on important matters like budget and publicity, they all care a lot about how to run and promote their museum as dedicated professionals, and some of the results from their long, considerate discussions and preparations are shown in the documentary from time to time. A special da Vinci exhibition certainly draws lots of visitors as expected, and we see a long queue of people waiting outside the museum.

We see two respective special exhibitions on Turner and Titian, and witness how these exhibitions contribute to the publicity of the museum while also shedding some new light on familiar artworks at times. In the case of Titian’s three paintings featuring Diana the goddess, they form an unmistakable thematic connection between them as being placed together in the same space, and this later resonates with a plain but sublime poem recital scene and an unadorned but gorgeous classic ballet performance around two of these interesting paintings.

After spending 12 hours a day at the National Gallery in London during almost every day of his 12-week shooting period, Wiseman worked on his raw footage amounting to no less than 170 hours, and the final result effortlessly flows during its three-hour running time. Although it does not have any expository or interactive elements we usually expect from many conventional documentary films, we slowly come to get the sense of how things are managed and maintained inside the museum, and that gradually immerses us into its emerging narrative flow. Every individual moment matters, and even a few outdoor scenes, including the one involved with a public stunt by environment activists, do not feel trivial at all.

I have only watched a few of Wiseman’s works, but I was impressed a lot by each of them while getting to learn how he has steadily advanced for many years. His first documentary film “Titicut Follies” (1967) does not lose any of its stark, disturbing power even though it came out nearly 50 years ago, and I think I will never forget those raw, rough moments shown from the patient-inmates of Bridgewater State Hospital for the criminally insane in Massachusetts. “Crazy Horse” (2011) was about a Paris strip club famous for its colorful nude performances which are both aesthetically and erotically compelling to watch for good reasons, and many interesting moments in that documentary were presented with underlying curiosity and fascination to engage my mind. “At Berkeley” (2013) was an unforgettable documentary film which is a four-hour visual portrayal of how many things work and interact with each other within the small campus world of the University of California, Berkeley, and it naturally took me back to my 15 years spent inside the campus of Korean Advanced Institute of Science and Technology.

While it was certainly nice to see Wiseman receiving an Honorary Oscar late in this year for his long, remarkable career, it is quite a shame that many of his works are not widely available to us yet. As far as I have checked, DVD copies of “National Gallery” and his other recent documentary films including the aforementioned ones remain rather difficult to find even on secondhand online stores, and his latest work “In Jackson Heights” (2015) is still not released on DVD or Blu-ray in US at this point. As shown from “National Gallery," he is indeed one of the great American documentary filmmakers, and his impressive body of work surely deserves any kind of special DVD/Blu-ray release.