In search of a miracle 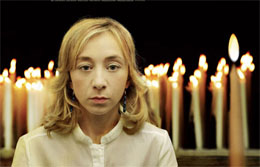 I have never been to Lourdes, a small town near the Pyrenees in southwestern France, but, considering Jessica Hausner's film "Lourdes," it looks like a nice place to visit. The hotel shown in the film looks good, and they serve visitors with care and respect. The landscape surrounding the town is nice to look at; at the meadow around the tops of mountains, you can see the green land below and the other mountains covered with snow.

But most people don't come to Lourdes to enjoy fresh air and pretty scenery. Lourdes has been known as a place of pilgrimage since a young girl named Bernadette Soubirous serially encountered an apparition of the Virgin Mary at a grotto outside the town in 1858. (Her story was later fictionalized into a novel which and then adapted into the 1943 film "The Song of Bernadett," for which Jennifer Jones won the Best Actress Oscar). The Sanctuary of Our Lady of Lourdes was established a few years later.

It was said that water from the spring in the grotto had healing power, and many people have visited with the hope of miraculous healing. I have doubts (according to scientific analysis done by the chemists, it's just plain underground water), but several cases of "miraculous healing" (or scientifically inexplicable medical cures) were reported, and some of them were officially recognized by the Roman Catholic Church.

If God exists, and if God really proves his existence to us through the healing water of Lourdes, we could say he is as generous as Las Vegas casino managers. Only 67 cases have been recognized as authentic miracles by the Church after its thorough investigation process; the last one in 2005). Those are low odds considering that the place has been visited by around 200 million people since 1860.

Nonetheless, people still have been coming to Lourdes with hopes not too different from the ones we have when we come to Las Vegas, although the chance of getting a jackpot is much higher than the chance of being healed by Lourdes water. Whether these hopes are absurd or not, they're is good for the town. Around five million people come to this small town with a population of 15,000 every season, so pilgrimage has become its main industry. In one brief shot in the film, people gather together for a group picture with the Rosary Basilica (built in 1899) behind them, and I could not help but think of the castle in Disneyland. Minus their hopes and beliefs, they are more or less tourists visiting a theme park. 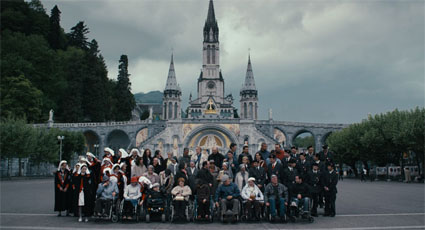 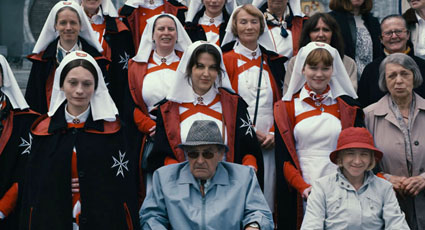 I am afraid I sound grouchy to you (I must confess; I am a skeptical atheist whose family is officially Buddhist), so I have to assure you that the film "Lourdes" is neither anti-religious nor religious. Maintaining its neutral position, it calmly observes the people who visit the town and other people who help them in this religious system. The caregivers are volunteers, and some of them, if not all of them, are devoted to their work. I was a little touched by a young caregiver who has become more serious about her duty than before while helping disabled people.

The group of pilgrims in the film are as diverse as the passengers in the "Airport" films, with various kinds of illnesses and disabilities. Many of them need wheelchairs or walkers to move around; some of them can move for themselves, and the others need help. We see a mother and her mentally ill daughter in a wheelchair who have been to Lourdes many times. We also observe a couple of middle-aged women who seem to come here just for tourism (one of them wants her eczema to be cured, but I don't think she's that serious). They throw sarcastic one-liners from time to time. Another middle-aged woman is a quiet lady with faith, but she has some questions to ask during the pilgrimage. And we also have the priests the guards and their chief, and the caregivers and their strict, fastidious supervisor. 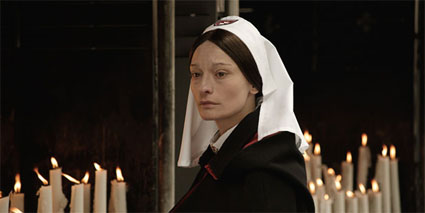 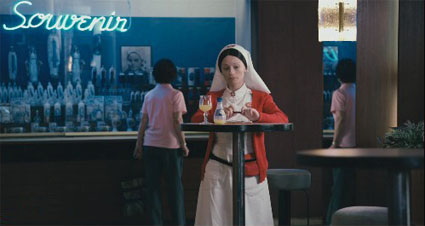 But this is not a variation of the famous movie cliché the "Ark Movie." The movie gives us little knowledge about the backgrounds of the pilgrims, let alone their names or information about their illnesses. For instance, one reviewer says a certain character is another character's mother, but I'm not so sure about that. Some conditions like dwarfism are apparent to our eyes, but, while watching one woman in wheelchair, I was not sure of the cause of her paralysis. Another woman character suddenly reveals her health status at one point, but it is because her body cannot help itself, not because she wants to show it to others around her. The movie avoids the possibility of melodrama inside that character and moves on according to the itinerary.

Their procedures over the week observed in the film are interesting to watch even to the outsiders like me. They visit the grotto, and they wait in a long line (the more you are disabled, the sooner you can go inside the grotto), and they bath with Lourdes water or drink it. The blessing ceremony is held at the big hall filled with lots of the people, and there is an amusing sight in which one of them attempts to move closer to the altar because she thinks that will increase the probability of miracle. 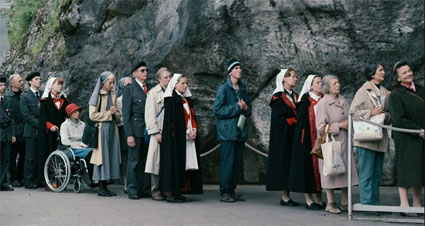 They watch a video together showing the testimonies of people who experienced the miracle (or did they?). They and others gather at Rosary Square in the evening where the hundreds of candle lights brighten dark night. On the last day, they will have a picnic at the mountain meadow (it's only for the people who can walk, by the way), and a farewell party in the evening will follow. 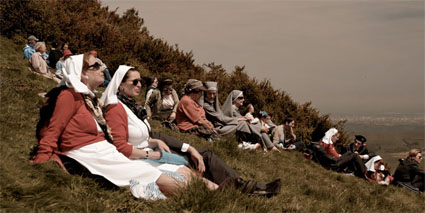 Meanwhile, something happens. Is it a miracle? The movie never explains or tries to explain it. There is no music but only silence in that scene, and the camera quietly focuses on one of the pilgrims, Christine (Sylvie Testud), in her bed one night. She begins to do something impossible considering her medical condition. On the next morning, everyone is surprised and most of them naturally think it is another miracle from God. 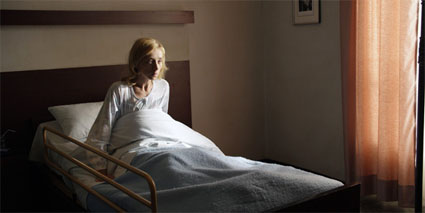 Or is it? She is soon diagnosed by a doctor to confirm whether it is a miracle or not. The doctor says it might be the sort of temporary recovery observed in many other people who visited Lourdes, but she is happy to be freer than before. Now she does not need help from others when she wants to enjoy the ice cream for herself at the cafe in the sunny afternoon, and, when she does that, my God, she does look really happy. 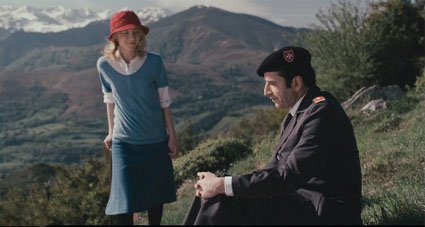 I do not remember seeing her in other films before, except "La Vie en Rose" (2007), but I can say that Sylvie Testud is a wonderful actress. Though she does not move much in her wheelchair, she slowly holds the movie with her serene, weary face while never asking for pity; we come to care about her, and we are joyous to see her face more brightened than before thanks to this sudden happening.

While it is possible that this was not a miracle, there are lots of questions in the film, regardless of what you believe. As one character asks, what should we do if we want a miracle? Is there any particular way for receiving it from an existence high above the sky? And why does God show his power rarely, though he is said to be almighty enough to heal many sick people on the earth who need help? And, in some characters' view, why does God seem to be unfair, when there must be people more devoted and desperate than Christine? Characters in the movie ask such questions and more, but the priest doesn't give satisfying answers. One of his answers is the one you have probably heard many times from men of monotheistic religions. To be frank with you, I could not help but burst out a laugh when he said that. Oh, come on, father, that's a cliché - but it can be true, perhaps. 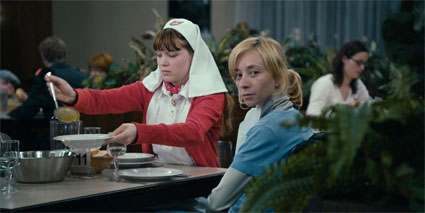 The director, Jessica Hausner, is not judgmental on her subject or her characters. The camera looks at the people like an unseen observer with a cool, objective attitude and carefully composed shots. In the marvelous opening scene, the camera patiently watches the dining hall while it begins to be occupied by people one by one, and our attention is slowly increased with a slow, subtle zoom-in. There is a serious undertone, but the movie is not entirely humorless. There is a small funny joke about Jesus and the Virgin Mary told by the priest, who is a man of religion both easy-going and sincere, and I think it will make my Catholic acquaintances laugh.

The final sequence of the film, the evening party on their last day, reminds me why some of us, if not all of us, need the religion or its alternatives like Alcoholics Anonymous. Life is basically miserable for most of us (after all, from the beginning we are approaching that darkness called death). Life is particularly terrible for the people like Christine, and we're all worried about whether our life has a meaning or not, apart from passing genetic information to the next generation. Regardless of whether God exists, it is nice to be with others, and we are consoled at least for a while that we are not alone, like the people in the film. The music plays, the people drink, and they dance (only those who can move their legs, of course). In its austere but humane view, the movie treats Testud's Christine and the other characters equally as human beings. They show envy and skepticism while congratulating Christine, but that is behavior as human as when the pretty young caregivers show their interest in the young handsome guards. 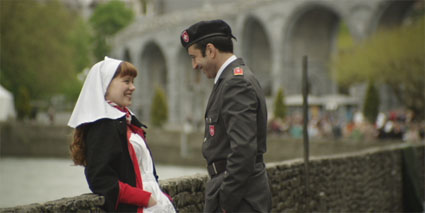 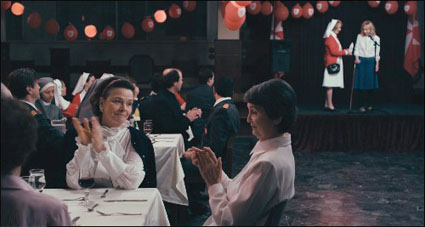 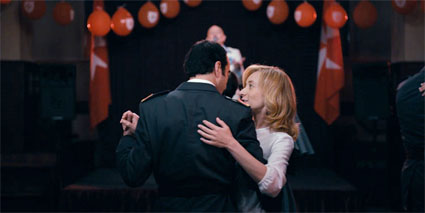 "Lourdes," which won awards at the Venice, Vienna and Warsaw film festivals, is a very thought-provoking film accessible to you even if you do not have a religion; you will have lots of things to talk and discuss after watching it. When a final single shot of doubt is hurled in the finale, we have a question about the ambiguous last shot as a consequence; was it not a miracle, after all, or was it a "cruel" miracle, and God intended it for a different outcome? How does Christine think about that? I have no clear conclusion even after re-watching, and neither does the film. Testud neither says nor reveals anything at that moment, either -- but let's say she makes an exit as gracefully as the movie does.