Hoping for Hope in a Philly Neighborhood 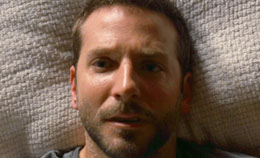 The key strength of David O. Russell's "Silver Linings Playbook" (2012) is that the acting is so strong that we forget we are watching the movie. In those moments that the plot guides us, it takes us in some directions familiar, some directions frightening, and some directions fun. In a year that has given us a compassionate story about addiction in "Flight," we also have this equally tender film about mental illness. I want to see this movie again, if at least because it is so happy, even though it did not have to be.

This is the story of Pat Solitano (Bradley Cooper), just released in his mother's custody from a mental health center. He seems to be in a constant internal pep rally, cheering himself on as he starts the big game. His uniform is a hoodie, sweatpants, and garbage bag, which recalls a football player in a raincoat or Rocky running through the streets of Philadelphia. His goal is to reform himself enough so that he can reunite with his estranged wife. 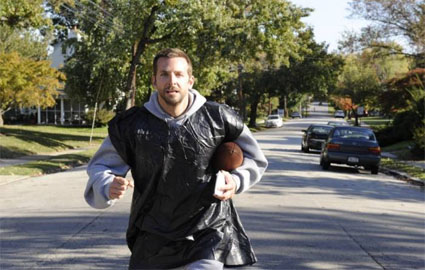 Soon, he meets the one person who can connect him to her: recently widowed Tiffany Maxwell (Jennifer Lawrence). She masks her tears beneath her eye-linered sharp stare, which she further protects under her messy bangs, while she hides herself in a renovated garage in her parents' backyard.

Both are disconnected from their spouses. One responded to wounds by hurting others; the other responded to wounds by hurting herself. Both lack filters in their language and conduct. Both are now heavily controlled with boundaries and medications. And, we know that both are on course to discovering each other. She is his conduit to his wife, and he is her path out of her hole. What we do not know is if their meetings are destiny or calculation, and thus we don't know whether destiny or calculation will carry them to their trophies. All three possible endings -- Pat reunites with his wife, or he does not, or he connects with Tiffany -- are equally possible, thus making the ending satisfyingly unpredictable. We will not know until the end of the movie if we are watching a humorous drama, or a romantic comedy. 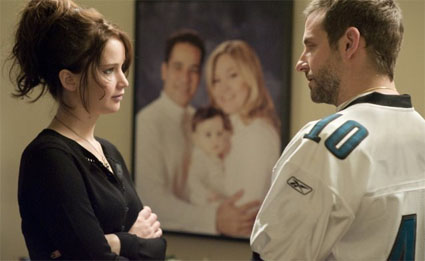 Pat and Tiffany enter a dance competition. And when we do not follow their rehearsals, we follow the Philadelphia Eagles football season. Pat's father (Robert DeNiro as Pat Sr.) is as obsessive-compulsive, as passionate and as superstitious as a sports fan can be. And he illustrates something I did not realize about sports fans until watching this movie. Spectator sports tend to bore me, except for those moments of intense pressure. For me, spectator sports --when not boring -- are mainly about athleticism, competition, and poise. But, this film helped me understand that sports fans have -- almost to the point of delusion -- more hope than almost any contingent in our society, and that includes Chicago Cubs fans. 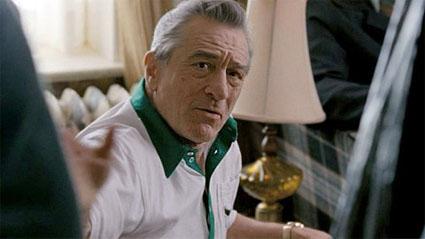 What Pat has inherited from his father is this optimism, though his methods are now different. His fuel toward his goal is his new code of life, the conviction that if you work as hard as you can toward a goal, you have a shot to reach that silver lining in the cloud of storms. This outlook does not promise the destination, but it does promise that if you put in the effort, then you can wish for it. In other words, his code of life is that if we earn the hope for hope, we might just get the chance to hope, or more. And, that sounds to me like a mighty fine strategy. In contrast, his father's approach is that if you gamble enough, with enough "Ju-Ju" in your favor, then eventually you have to win. And, that is preposterous. Pat Jr. is willing to work his hardest, for the chance to hope. Pat Sr., however, has despaired of working for that sense of hope and is willing to take down his family in the process.

In any case, I imagine that if we reversed the roles, we would be following the story of a broken, but hopeful father trying to reign in a reckless, addicted son. In that case, we might assume that the prodigal son chose his own path of peril. Here, however, we follow a son suffering with illness, struggling to take control of his life despite the negligent efforts of the reckless father.

What I appreciate about this movie is that it treats mental illness as an illness, rather than as a set of personal demons or a scarlet letter. Hollywood films usually feature mental illness in plots involving schizophrenia and/or dissociative disorder and murder ("Black Swan," "Psycho"), autism and genius ("Rain Man"), and anxiety and suicide ("Ordinary People"). Sometimes, our characters will make us giggle at their neurotic behavior, as is the case in most of Woody Allen's early films. Or, our characters will be clowns with traumatic histories, as in "The Fisher King." Sometimes our characters are just maniacal, as in "The Dark Knight." Sometimes, we will look at the world through the eyes of our central character, wondering what is real, as we did in "Shutter Island" or "The Others." In "Silver Linings Playbook," however, perhaps our characters could have been cancer patients without changing the heart of the story too much. Meaning, the film does not present mental illness in this story as something to be feared, to wow us, to mourn, to laugh at, to gaze at, or to mystify us. Rather, mental illness here is something to be dealt with, to approach with a plan, and is subsequently cause for a bond between two hurting people. Theirs is a hurt explicitly for their spouses, yet implicitly for the chance to be themselves in a world pushing its own conformity. Consider that the climax of the film involves a dance competition they are guaranteed to lose. They enter it for themselves. 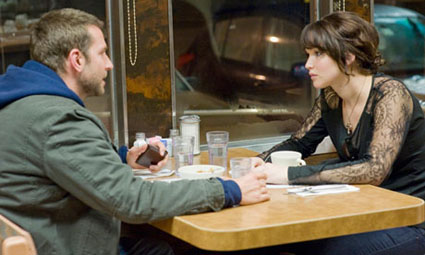 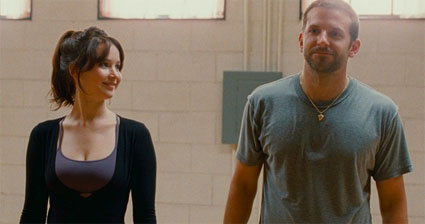 On that note, our culture is only beginning to accept that mental illness is just as much an illness as is an ailment of the heart or kidneys or lungs. As is the case with, for example, heart disease, medication alone is not sufficient to eliminate the need for care; a strategy is necessary. Such is the case with mental illness. Such is a thread in this film, involving a very hilarious, yet frank psychiatrist, played with magnificent deadpan by Bollywood star Anupam Kher (most familiar to young Desis as Shahrukh Khan's father in "DDLJ"). 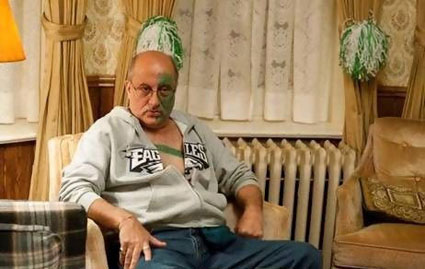 The label of "crazy" dismisses the target as something hopeless, which seems to be one of the points of this film: all of our characters, with each of their own illnesses, issues, and quirky choices, are characters full of hope. Each character seems have a yearning for healing, and each character seems to have the hope for cure. Even the reckless father wants a better life for his family, especially his son; he just seems to lack the courage, ability, and will to use orthodox means to do so. 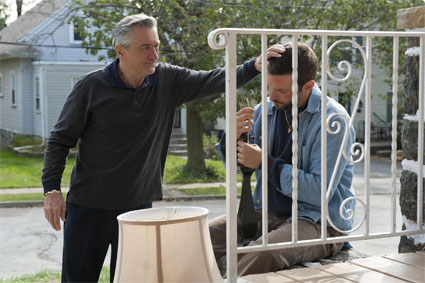 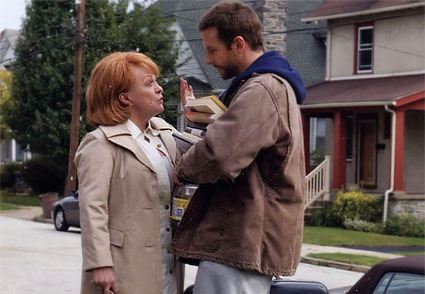 But, this film also explores medication as a tool to control, recalling "One Flew Over the Cuckoo's Nest." In Pat's struggles to take control of his life, he faces resistance first from his facility, which hesitates to release him to his mother. He then faces resistance from his parents. On the one hand, they are his chaperones. On the other hand, Pat's father guilts him into assisting with his gambling superstitions. In addition, a high school student keeps appearing, hoping to do a school project on mental illness. Furthermore, an always-in-uniform cop keeps appearing at opportune moments to monitor Pat. Meanwhile, a gentle Danny (Chris Tucker) keeps escaping from the mental health center, under the guise of changes in legal codes, only to be apprehended soon afterwards. Nevertheless, we do not get the sense that these human censors are evil. In "Cuckoo's Nest," we witnessed a battle between an oppressive, controlling institution, its minions fighting to subdue helpless patients. In "Playbook," however, our censors are nice people exerting control in hopes for stability for themselves and for each other. 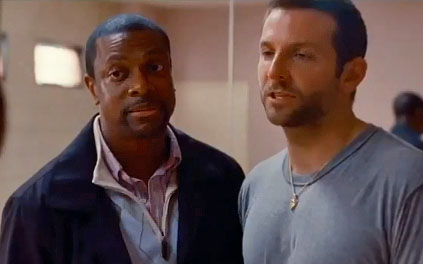 In the center of this whole mix, is the outstanding acting from our stars. Bradley Cooper is a revelation in this movie. Until now, I saw him as a pretty face with stationary eyes, and very little acting skill. Here, however, he is so perfect as Pat, that he steals our heart. There is a light bulb moment at the end of the film, where he realizes what we think he realizes. But, he remains silent for the next few minutes, performing, searching, whispering. And, all along, we are wondering if he is making the choices we hope he is making. Meanwhile, Jennifer Lawrence proves herself yet again as one of the few female actors with the opportunity and skill to command our attention with her silences as much as her words. If this were Bollywood or 1950s Hollywood, we would be witnessing the beginning of a beautiful screen friendship. 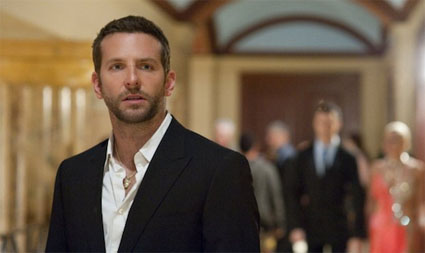 David O. Russell's filmography is filled with stories of circus characters, from "Flirting With Disaster" to "Three Kings," to "I Heart Huckabees," and everyone but Mark Wahlberg in "The Fighter." The difference here is that in "Silver Linings Playbook," our characters might be quirky, but they are not caricatures or clowns. They are friendly, happy people in what could have been a dark and scary world. And, in today's social, political, and economic climate, I wish more motion pictures were this hopeful and happy.