It was quite the sight when I first saw Tom Dark. It was my first visit to Ebertfest in 2010, and I was one of several guests invited to participate in Q&A sessions for each film. My fellow Far Flung Correspondents were all dressed smartly for the occasion, it being our first one of a kind event. My friend Ali Arikan was first at bat for the opening night, looking sharp for "Pink Floyd The Wall." Though he was joined by two other co-panelists, one of them noted film critic Christy Lemire, it would be the third party who would stand out.

Here was this large man with an equally large mustache. With his fishing jacket, cargo shorts, sandals and "comfy hat," cutting a casual figure in what I initially figured to be a formal affair (it isn't that formal). But regardless of his appearance, his musings were measured and thoughtful as he held his own on the stage. He made a memorable impression, the first of many to those of us who knew him.

During that festival, he was probably the most charming man around; a stimulating conversationalist who could wax poetic on almost all things artistic, religious or political. He had a soothing baritone voice, the kind you would probably associate with a horse whisperer, which he kind of was. And oh did he love his horses, and all of the other critters on his New Mexico property, as was evident in the many photos he shared. 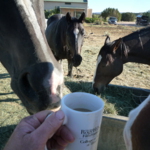 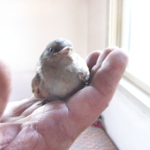 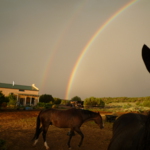 It wasn't always rosy between us though, as I once had an email spat with him which I thought would permanently alter how I viewed him. Others got a glimpse of his cantankerous nature on Twitter as he would take on those whom he felt were being dishonest or disingenuous. Some of his stances on controversial subjects were downright kooky, and this caused some of his friends to keep him at arm's length.

Yet somehow I could never forget the lovable guy I met at Ebertfest. When Roger's circle of friends gathered once more the following year, I hadn't forgotten about our arguments, and I could sense that he regretted it. But I just could not hold it against him. In person, there isn't a bad bone in his body. Even Roger, who did have some disagreements with him, always welcomed him at his festival. I have never met someone with a bigger disconnect between his online and offline persona. His giant 'stache couldn't hide that wonderful smile of his. I loved the big lug. 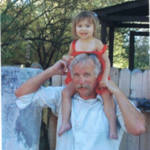 In the past few years we would keep tabs of each other through emails, as I couldn't bear with his conspiracy theories flooding my Twitter feed. He would always encourage me with my writing, giving me tips here and there when I had a piece that I needed help with. Whenever there was a scandalous story involving horses, he would always be the first person who came to mind as he would give me "the dirt" on what really went on. He would always reply with fondness whenever I discussed my kids. He was like another grandpa waiting to enter my life, and I longed for the day to visit him with my little ones. Visions of horse riding and horse biting filled my mind.

He could seem difficult, distant and strange, but at his best he had an undeniably warm and poetic soul. He's one of the most unforgettable characters I've ever met. My mind's very definition of a codger. Here's to you Tom. May we ride again.