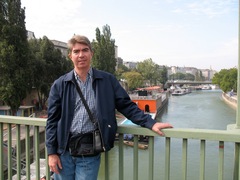 I was born October 1° 1962 in Mexico City where I currently reside with my wife Monica. I have a degree in Architecture and a MBA from IPADE here in Mexico. My interest in movies started at a very young age as my father used to take me and my brothers to double or even triple features at our neighborhood theater.

I mostly remember seeing Tarzan movies and Disney classics though mostly we watched a lot of forgettable war and cowboy movies which I once feared would make me dislike cinema but on the contrary, whenever we did get to see any good stuff I couldn't believe how much I enjoyed and valued it. Then my teen years came and "The Poseidon Adventure" became the subject of everyone's discussion at my school. By the time I first saw "Jaws" at age thirteen it became my favorite all time film and somehow still remains even after watching it more times than I can remember.

I first learned of Siskel & Ebert sometime in the mid-eighties during one of many summers I spent with friends in Columbus, Ohio. By 1988 they started showing it in our cable station here in Mexico and it soon became a must watch for me, even videotaping reviews of the most anticipated movies. I particularly enjoyed a special show they had sometime around 1990 or 1991 in which they exposed the most common movie cliches (fruit cart!).

Then the internet came along and in 1999 I e-mail Roger my very first suggestion for his "Little Movie Glossary," which incredibly he chose for one of his coming Yearbooks, since then I've sent him dozens (or hundreds) of suggestions and even though my days of batting 1.000 in that department didn't last very long, I have happily been published about 20 times in Roger's Annual Yearbook.

I have also contributed to Time Magazine's 10 Questions segment in three separate ocasions (Alex Trebek, Andy Roddick and Hilary Swank) as well as in the "Freeze that frame" segment of the long ago defunct, Video Review Magazine (1991).

I have won two of Premiere Magazine's (Mexican version) trivia contests: an Omega watch for the James Bond contest (1995) and a VCR for the Lethal Weapon one (1996). I also won the Cinemex (Mexican movie chain) Godfather trivia contest which is how I got my first DVD player in 1998. My main interests are movies & DVDs, playing tennis, following the New York Yankees and, whenever possible, traveling. My favorite film is still "Jaws," but the first two "Godfather" entries make me question my standings every time I watch it.

Siskel and Ebert voted thumbs-up, but disagreed about the casting of Sofia Coppola.