Fighting after the war is over 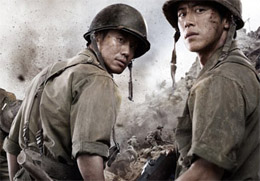 There exists a stationary phase in wars unless they end quickly. The soldiers on both sides doubt whether they can survive; they are more exhausted day by day and it seems their hardship will last forever until they are killed in the battlefield. Even so, when the time to battle against the enemy comes again, they have no choice; they always do whatever their survival instinct drives them to do, and there come more scars and pains to be stored in their hurt lockers. 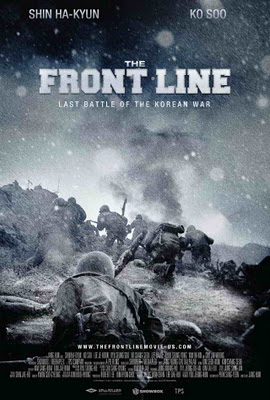 The South Korean war movie "The Front Line" presents us with the last chapter of the Korean war, which was far less dramatic than its major events but, according to this film, far more frustrating to the people on the both sides of the battle line. When North Korea invaded South Korea on June 25 in 1950, the North Korean army was confident that they would win in a short time, but the situation was soon reversed when the allied forces of South Korea, the US, and the UN quickly pushed the North Korean army to nearly the North Korea-Chinese border. Then China entered the war in January 1951, the Allied forces retreated to the south, and then they counter-attacked again to push North Korea and China to the north. Eventually, they arrived at the stalemate with the battle line that divided Korea in half as before the war. 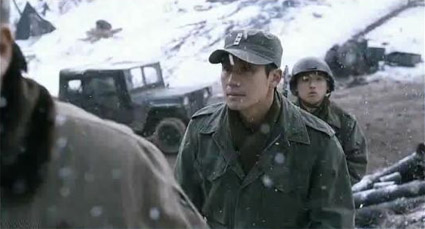 That situation lasted for more than two years until the sides finally signed an armistice agreement in July 1953. Ironically, while top military officers were negotiating for the truce at Panmunjom, the soldiers on the front line kept fighting to defend or recapture areas as if they were in some kind of endless extension game. In one scene, when the officers on the both sides are finally about to reach an agreement, they are suddenly informed that the military demarcation line has been just changed during the latest combat. The negotiation is adjourned as a result, and there will be soon another combat, and...

The circumstance can be summarized by one darkly amusing montage scene in the middle of the story. The North Korean soldiers take over a hill on one day, and then they are chased away by the South Korean soldiers on the other day, and then the North Koreans take it over again. As a matter of fact, it has happened so many times that one character cynically says to his friend that he cannot even remember how many times they took over the hill, which is becoming more like a mass mound; when they dig up the ground to bury bodies, they come across other ones they buried previously. 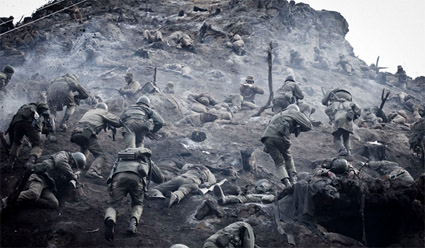 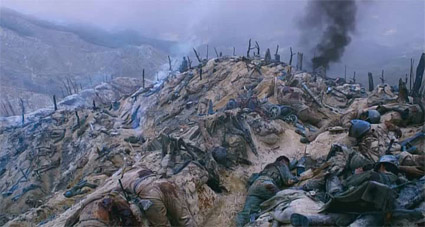 Its name is Aerok Hill. The Alligator Company of South Korean army has fought for a long time around that hill, and the soldiers have been praised for their valor, but they have recently been under suspicion from the counterintelligence department. The company commander died during combat under a questionable circumstance. He was shot by a gun from his company; don't ask me how they came learned that in such a busy situation). Somebody in the company is sending letters from North Korean soldiers to their families in South Korea. 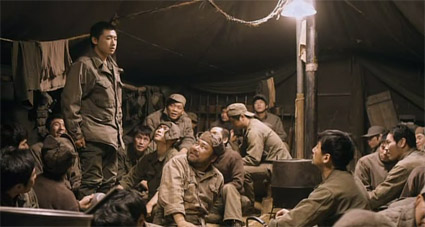 Eun-pyo (Sin Ha-gyoon), a lieutenant from the counter-intelligence department, is assigned to surreptitiously investigate this incident. While happy to learn that his friend, Soo-hyeok (Ko Soo), who was taken by North Koreans when they fought together in 1950, is alive well in the company, Eun-pyo senses there is something awkward about the soldiers of the Alligator Company. The company is led by Il-young (Lee Je-hoon), a captain who is far younger than the soldiers under his command. It can be said that the de facto leader is Soo-hyeok, but he and others really respect Il-young's commanding position, and Il-young does have courage and experience as the leader. Though there is visible comradeship among them, there also exist the things they do not want to openly talk about; is it possible that their secrets are connected to the death of their former commander? 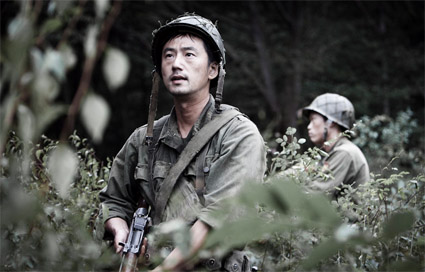 Even before a third of the film's running time is passed, it is revealed that the question is a MacGuffin to pull us into something deeper than a "murder mystery." There are secrets, but they are revealed earlier than we expected, and they give us insights into the extraordinary human conditions during wars. The soldiers on both sides fight like hell when they have to, but even while conflicting with each other, they form a strange, complex relationship only possible in war. After so much ruthless violence between them, there is enough humanity left for them to show a little kindness to each other indirectly if they can afford -- but they never forget their duty as soldiers, of course.

The screenplay is written by Park Sang-yeon, who wrote the novel "DMZ", which Park Chan-wook's "Joint Security Area" (2000) was based on. That film is also about an unlikely relationship between South Korean and North Korean soldiers at Panmunjom, but, in that case, the story is milder and more sentimental - probably because, despite everything that has happened during last 62 years, North Korea and South Korea have learned a contradictory way of getting accustomed to each other while still conflicting with each other. We had another headache due to North Korea in 2010, but, as usual, after the tension was considerably increased, the situation then become less tight, even after Kim Jong-il died in last December.

The director Jang Hoon, who was the assistant director in Kim Ki-duk's "The Bow"(2005), makes a solid war film. The battlefield scenes are handled well; they are dirty, bloody, chaotic, exhausting, and dynamic. At first, with quick cuts and a hand-held camera, the movie gives the disorienting feeling of a battlefield we have been familiar with since "Saving Private Ryan" (1998), and then it begins to look at the battle scenes with smooth, steady camera moves under his confident direction as if we ourselves were getting used to what's happening around the characters. Jang Hoon does not lose human dimensions amidst lots of explosions; every step forward feels really hard for the soldiers. 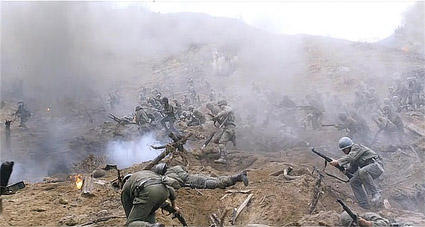 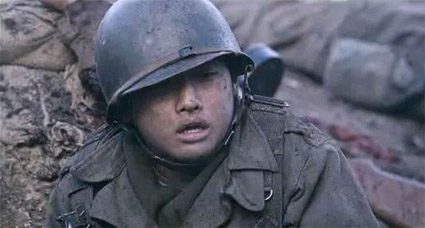 As the lead performers, Sin Ha-gyoon and Ko Soo admirably carry the film while complementing each other, though they are pretty much stuck in a typical male melodrama plot with predictable turns. When I saw cute little war orphans hanging around the company soldiers, I knew there would be a moment when somebody would make at least one of them cry. 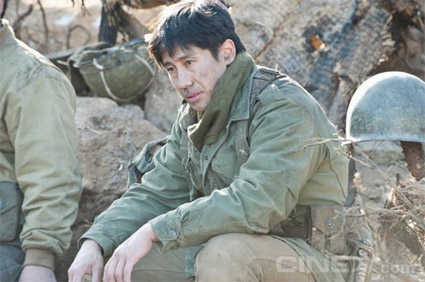 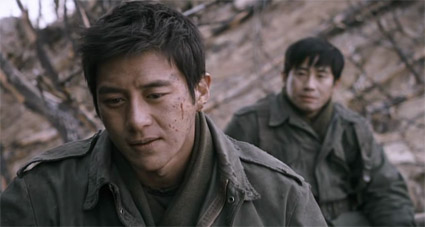 The best thing about their neutral performances is that they allow lots of space for talented supporting actors. We have such reliable veteran supporting actors of South Korean films like Ryoo Seung-Soo, Ko Chang-seok, and Ryoo Seung-young, and it is also nice to watch young new actors like Lee Je-hoon or Kim Da-wit (Yun Jung-hee's reckless grandson in Lee Chang-dong's "Poetry") holding their places among their seniors. When they are together as company soldiers, the bond between them is palpable. We accept them as a band of brothers right from our first encounter with them.

Though there are the standard stock characters we've met in countless war films (an old-timer who frequently talks about his battle experiences, a young inexperienced soldier who has never been to battle, a shell-shocked soldier, a soldier who misses his family, an ineffectual commanding officer insensitive to the ordeal of his men, etc.), the actors make these clichés into the life force of the story as a group. The mystery in the story gets less important as the plot progresses, and their daily struggles becomes a compelling element to drive the story. As a matter of fact, you can picture them as the characters of some epic TV miniseries with a little touch of Robert Altman's "M*A*S*H" (1970). 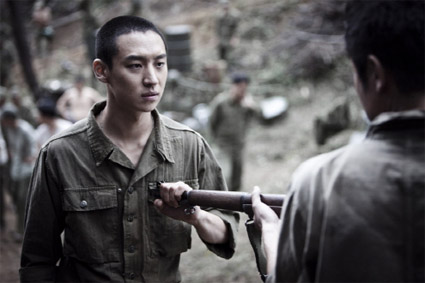 All the supporting actors are uniformly good. Lee Je-hoon, who was very memorable as a tragic bully in "Bleak Night" (2010), gives the best performance as the young captain, who rigidly hides the memory of an impossible situation he had to deal with. What he chose to do was quite horrible as shown in a flashback sequence, but who can blame him? Survival is the No.1 priority in wars, and he did what should be done for saving himself and others -- but not all of them. Ko Chang-seok, who delighted me and others in two previous works directed by Jang Hoon, steals the show again as an old-timer who has accepted war as the part of his life. Ryoo Seung-young and other performers accompanying him bring the human side to their North Korean characters, and so does Kim Ok-bin as only substantial female character in the film (you probably remember her as the heroine of Park Chan-wook's "Thirst" (2009)). 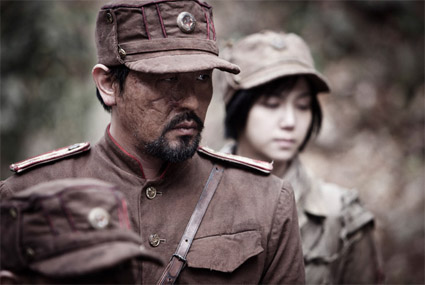 In spite of many good qualities, "The Front Line" is ultimately marred by its third, which is too long and unnecessarily preaches to the choir. Still, it is not a fatal flaw, the movie doesn't entirely lose its grip on us, and it has a point about how horrifically and absurdly meaningless it was to force the soldiers to certain death only to push the demarcation line forward a little more even when war will officially end within less than 12 hours. The movie lags significantly compared to its first 90 minutes hour at this point. As several South Korean critics pointed out, it could have been a lot better if its lagging third act had been trimmed around 20 minutes at least.

"The Front Line" was South Korea's official submission to the Best Foreign Language Film category of the 84th Academy Awards this year. It was a good choice, but I do not think that was the best choice considering other more stellar South Korean films that came out in 2011, including "Bleak Night" and "The Yellow Sea." While revisiting the film, I thought about how generic it is as a war film. On the technical aspects, it is needless to say that the movie is excellent, but I also could see several spare parts from other war films, which make the film look less distinctive. And I again found that two main characters are the least interesting human beings in the film as I did when I watched it for the first time in last July.

Despite its flaws and weaknesses, the movie remains good enough to be recommended, and I think it is better than other Korean War films I have seen during the last decade. War is surely hell or hellish purgatory, and here is a good war movie which tells that universal truth without any ostentation while depicting a painful chapter of modern South Korean history.