A Very Particular Set of Skills: A Look at the "Taken" Saga

The Luc Besson-produced “Taken” saga is regarded as a guilty pleasure more than anything else, but I don’t think it was an accident that its first entry became so popular and quoted, even if its own star first visualized it as direct-to-video material. That movie dealt with the true-to-life horror of trafficking in a way that hit a nerve (even in what’s just an action flick) thanks to the casting of bonafide actor Liam Neeson in the lead role of ex-CIA operative Bryan Mills. Aided in no small measure by all sorts of editing tricks, Neeson’s fighting skills in his late 50s matched him with the Jason Bournes and the Evelyn Salts. A good deal of the picture’s suspense was achieved with one of those phony self-imposed deadlines (think Rambo’s: “you have 24 hours to get the hell in and out of there!”), leading audiences to fear that Bryan’s daughter was in a real danger of disappearing inside an unimaginably cruel and ugly world.

Pierre Morel’s “Taken” (2008) starts on the West Coast of the US and moves to Paris. A lack of realism is evident in some details that just don’t ring true, such as its trying to pass Irish Liam Neeson for an Angelino, showing him getting together regularly with his ex-CIA buddies for barbecues/golf-tournaments and casting a very grown Maggie Grace as his teenage daughter, giggling her way through the earlier stages of the movie. It also included such worn out clichés as “you were never there for us!” complaints from Bryan’s ex-wife Lenore (Famke Jennsen), baguettes sticking out from fake grocery bags, sinister characters hiding behind open newspapers, and so on. Still, there was plenty of ingenuity in the way Neeson was able to locate his daughter in a needle/haystack fashion and we got a great deal of satisfaction from watching the villains get their own desserts for ignoring his “particular set of skills” speech, one that only an actor of his stature could turn into such a classic. Despite all of its warts (and maybe in part because of them too) “Taken” became a memorable feature, even if it did not help the causes of the Paris and Tropoja tourism boards. 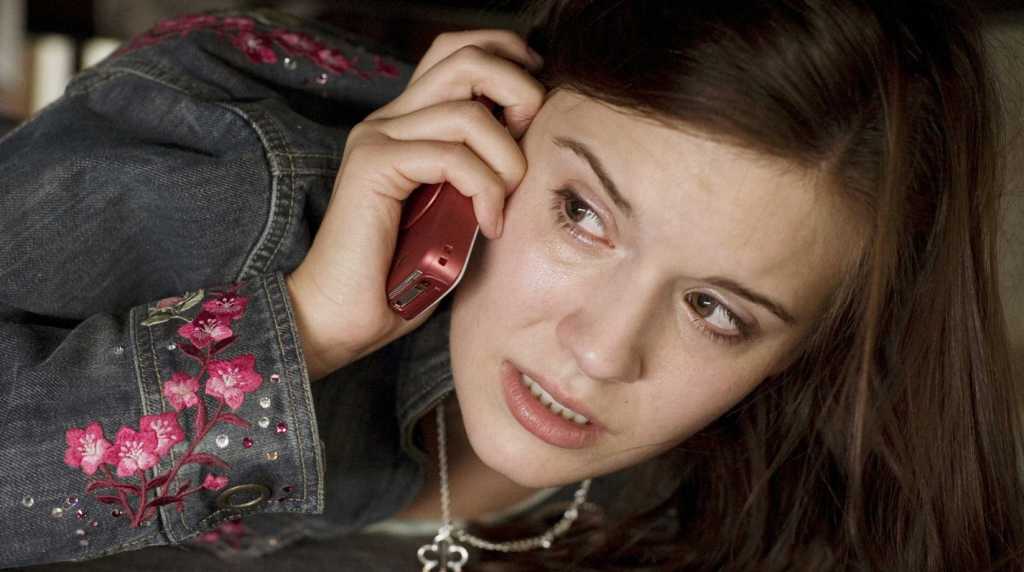 Box office success automatically means obligatory sequels, but “Taken” came with two inherent problems in this regard. First up, it didn’t occur to the filmmakers early on the upside of providing Bryan Mills with a good dose of loved ones that could be placed in peril for future entries, and second, neither the film’s title nor the premise lent themselves very well for future “Takens”. Then again, let’s not forget that “Die Hard” (1988) had little problem spawning a lengthy series with a similar “this can’t be happening to us again!” premise and that Besson could have always used colorful titles the likes of “Taken Again” or “A Good Day to be Taken”

And so Besson had no choice but to come up with “Taken 2” (2012), directed by Olivier Megaton. The film’s only real sins turned out to be the use of even shakier camera/quicker cutting techniques than its predecessor, and featuring just about as many shots of Istanbul’s main mosque as eventual dead Albanians. “Taken 2” was filmed in some great locales, and basically repeated the original entry’s formula, turning its attention to the only two remaining characters worthy of being taken: Bryan and Lenore. Considering that an audience can only be concerned about an indestructible character for so long, the results were far less suspenseful, but thanks to Neeson’s presence we were able to accept such absurdities as Bryan’s obnoxious wife turning into a real darling overnight, and the laughable explanation of her current husband’s absence (played in the first movie by Xander Berkeley) by showing a stand-in driving away from their home in anger (saving the producers some money in the process). “Taken 2” turned out to be a mediocre but watchable movie and the first two films passed the biggest test for this kind of material: they compel the viewer to give the remote control a break whenever  appearing on TV. 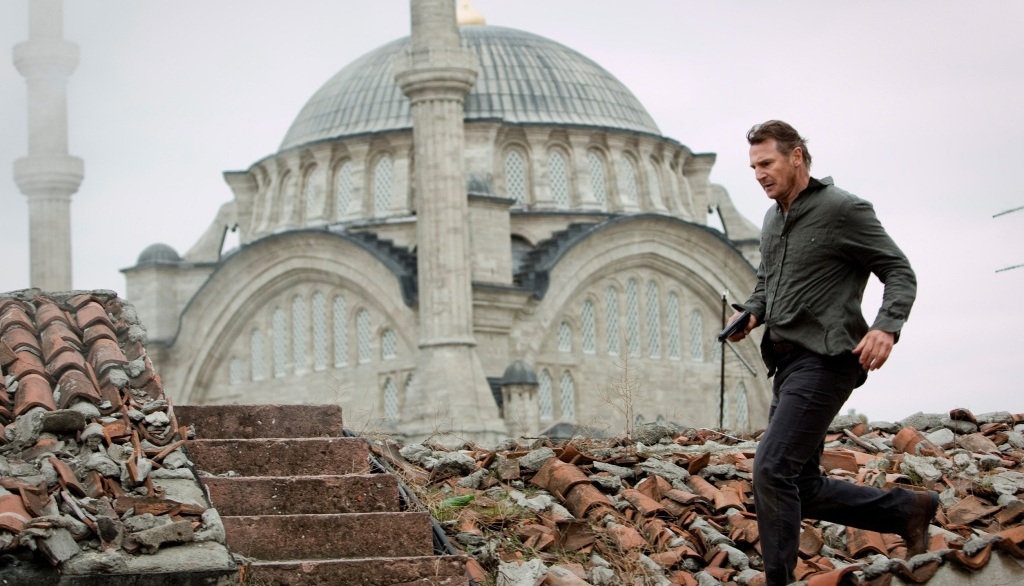 And so for the last couple of years I’ve wondered how the third entry in the series would solve a lack of takeable character for Neeson to save. Would the filmmakers turn to one of Neeson’s ex-CIA cronies as victims? How about the pop-singer from “1” or Maggie Grace's boyfriend from “2”? Could Bryan discover he has a long lost child for abduction purposes? Would the next movie start with the mass burial of the Albanians killed by Neeson in “2” just as that entry did with the funeral of those he eliminated in “1”?  (SPOILERS AHEAD) Olivier Megaton’s “Taken 3” bypassed these questions and became a virtual copy of “The Fugitive” with Neeson in the Harrison Ford part and Forest Whitaker in Tommy Lee Jones’. Bryan is now wanted for the murder of his wife Lenny but instead of dealing with these matters in such exotic locales as Paris and Istanbul we now get a very disappointing Los Angeles, a great city to be sure but also the site of 90% of the 1970s police shows I grew up watching. Still, one would have to believe that as long as the film had Bryan Mills, his particular set of skills and enough evil Albanians, the series could keep going for a while.

Amazingly, “Taken 3” has far bigger issues than its lack of originality. This is one of those rare films where it doesn’t take you more than a couple of minutes to realize it is never going to get any better. As the movie opens, we see an unidentified bookkeeper being taken from his home by some evil eastern Europeans and killed in his superior office (not knowing who he is, we never really care all that much about his fate). This character turns out to be the only character taken in “Taken 3” but it is unclear whether the movie was named after him. Then again, the passing of Bryan ’s ex-wife may qualify as well since she is shown being taken for good. 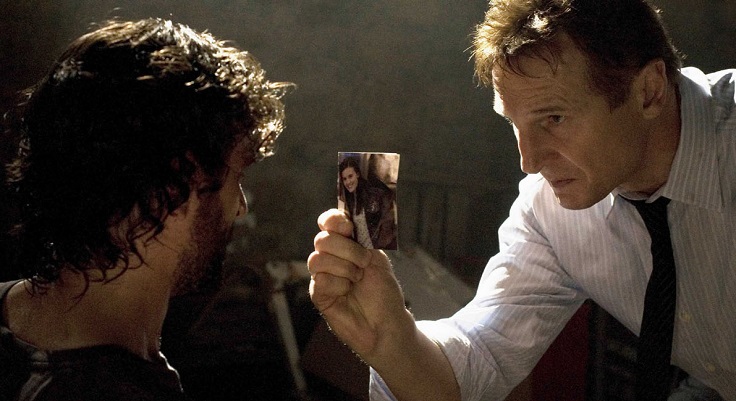 There are several signs spread throughout the picture that suggest it was made on the go with the idea of later figuring more plot details and resolutions, unfortunately, no one ever did anything about them and they remained as these giant loose ends. Take for instance the scene where Neeson finds Janssen’ss body lying dead on a bed: it isn’t until later in the movie that we learn that her throat was slashed with a knife despite the fact that there isn’t a single drop of blood in the crime scene. This leads me to believe that the filmmakers were just leaving their options open in case a better idea came along, which it never did. Bryan might have his “particular set of skills” but he does the same dumb thing that every other character in movie history does when entering a crime scene: he picks up the murder weapon two seconds before the police arrive, becoming Whitaker’s prime suspect in the process. Later on, he risks being captured while sneaking into the morgue and taking a clip of hair from Lenny's body for his CIA buddies to analyze. However, if her neck was really slashed, what was then the point of doing so? (The hair sample is never mentioned again). It is worth noting that Lenny makes for one of the freshest looking corpses in movie history in a scene where Janssen earns her paycheck her by agreeing to be placed inside what seems like a real morgue cabinet.

There’s not much point in further analyzing the ignored possibilities for “Taken 3” . Perhaps all the filmmakers had to do to make their audience happy was shooting some decent action scenes, paste them with some interesting character development and maybe add some clever crime material as well. As it turns out, the Mills’ family early scenes are just there to move the plot along and they are all excruciating to endure (was there really a point in focusing so much time on Grace’s odd reaction upon getting a giant Panda from Bryan?) Additionally, most of Bryan’s actions are downright bewildering. Take for instance the scene where Grace stops at a convenience store on her way to school (leaving directly from her mother’s funeral, no less) for her daily peach yogurt and finds a note pasted on top of it telling her to swallow the drink right away. As it turns out it has been poisoned by Bryan and Grace becomes nauseous, forcing her to make a run to the school’s restroom where her father gives her an antidote and tells her he had go through this process so that they could meet there secretly. The question here is: why not simply leave the following note on the yogurt: “see you at the school restroom in 20 minutes”? The line between Bryan Mills’ genius intuition and total nonsense is thinner than ever in “Taken 3”. 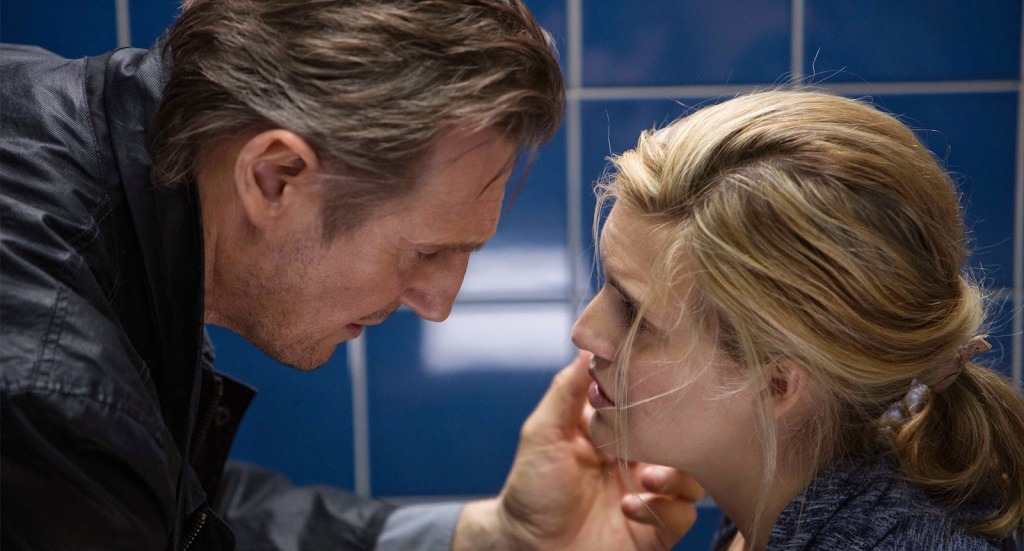 We also have the film’s action scenes with shots that never last more than a full second, with the camera constantly moving in all directions. Even worse, there seem to be bits of film missing from the final cut, which I’m guessing were likely never shot. As a result, it is not only difficult to follow the proceedings as with most current action movies, it becomes impossible. Three days after seeing “Taken 3,” I still have no idea where the container that crashed the roof of a car came from, or how Neeson was able to leave the vehicle that fell into a precipice. There were moments when I simply gave up and decided to look away for sanity’s sake. The same applies to Dougray Scott’s Americanized accent in the role of Lenny’s current husband. He sounds as if his mouth is full of marbles (think Colin Firth at the beginning of “The King’s Speech”), and, at times, it is nearly impossible to understand him. I also think it was a mistake for the filmmakers to come up with a twist ending where he turns out to be the villain, considering he is the kind of actor most likely to be cast as one to begin with (much like Sean Bean usually is).

It would seem that when the original “Taken” came out five years ago, Liam Neeson discovered a personal niche in the action movie realm with a better lead than it probably deserves. And yet, every entry from this period has had some wildly illogical traits that somehow only serve to enhance my fondness for them. Consider “Unknown” (2011) where Neeson develops the typical movie amnesia where a character can only remember memories relevant to the plot and where he recalls a pivotal picture of his past from the point of view of the person who shot it, instead of his, the one who posed for it. Then there’s “Non-Stop” (2013), in which the villain asks for a multimillion dollar ransom to defuse a bomb aboard the same airplane where he is currently traveling. Whatever their peculiarities, these are films that I’ve eagerly gone to the theater to see but by agreeing to make the incompetent “Taken 3” the tagline “It ends here” may very well be applying to Neeson’s action star days. He’s finally given us pause when considering whether or not to attend the ones that may follow, on good faith alone.