A man with storms in his head 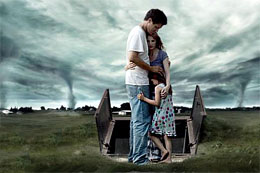 A professor at my department who studied neuroscience, once told us something you have probably heard elsewhere: If you think you're crazy or getting crazy, that means you are not crazy because crazy people do not know that they are crazy. This sounds like the famous dilemma in Joseph Heller's "Catch-22." I thought it was useful advice for students who had to deal with lots of pressure and stress in the academic process. It could also be good advice for the hero of "Take Shelter" (2011), because he thinks at first something is wrong with his head, but cannot ignore what disturbs deeply him. He tries to quell his mental turbulence as much as he can, but is transformed into a more disturbed man obsessed with visions attacking him every night. It is possible that he himself is the threat to the family he wants to protect, not the catastrophe of epic proportion he fears.

What Curtis (Michael Shannon) experiences in his dreams is very frightening indeed. In the opening scene, he sees big storm clouds gathering in the sky while dark, thick rain droplets are falling. Other disturbing moments follow in subsequent nightmares. His dog suddenly attacks him and bites his arm. He and his daughter find themselves attacked by strangers as if they are in some sort of zombie movie. His house is impacted by unknown forces. And he begins to see and hear disturbing things even when he is really awake during day. 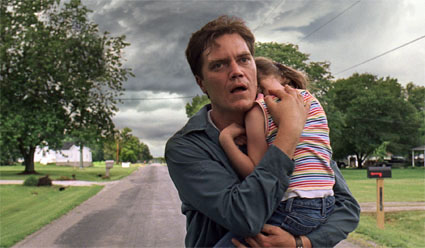 Though he's agitated by dreams with apocalyptic undertones, he tries to maintain his daily life in a nice little town somewhere in Ohio while searching for the solution to his problem. He knows it's possible that he is getting crazy. His mother was diagnosed with paranoid schizophrenia, so he may be suffering from a similar mental illness due to genetic factors. He checks several books on psychology at the library. He also meets a counselor to get more advice and help. He is prescribed with medicines for alleviating his symptoms.

But his dreams still visit him and they continue to exert sinister effects on his mind. There are of course several "it was only a dream" moments in the film, but director/writer Jeff Nichols makes these clichés into something truly terrifying with effective CGIs. The dream scenes look so vivid and realistic that we can understand why Curtis is frightened by the possibilities they ominously imply. You know it's not real, but you can see how excruciating it is to him when you see his terrified face, his teeth clenched tightly during one of his nightmares. This is scarier than what's happening before his eyes.

Michael Shannon's increasingly anxious performance, which was unjustly not nominated for Best Actor Oscar this year, is crucial for the mounting suspense in the film. I noticed Shannon for the first time in Oliver Stone's "World Trade Center" (2006), and he has been memorable as intense or disturbed characters in several films including William Friedkin's "Bug" (2006), in which he and Ashley Judd plunge themselves into the pit of madness with no compromise, and "Revolutionary Road" (2008), where he shatteringly trembles his co-actors as the truth teller of the story.

In this film, you can easily imagine Shannon in the remade version of "The Dead Zone" (1983), where Christopher Walken plays an ordinary man unnerved by the disturbing visions only he can see. Shannon conveys to us the seething instability inside his character's mind through the quiet but uncomfortable intensity exuding from his face. Curtis is a nice family man we can like, but he finds himself helplessly unhinged by what's eating him inside. He wants to talk about his woes, but it is not easy for him to talk openly about them, because he has the responsibility to support his family as the husband and father. His daughter with hearing problems fortunately gets a good chance to have a cochlear implant surgery, and he is well aware that his mental problem may ruin this good fortune.

He attempts to take care of his problems by himself through getting rid of the sources of the fears induced by his dreams. He builds a makeshift pen for holding his dog, and then, not satisfied with that measure, he eventually gives it to his brother (their brief conversation scene suggests the bitter mutual feeling about their unhappy past). Because he is afraid of the possibility of a massive tornado, which can really occur suddenly in his region, he begins to renovate and expand the storm shelter in his backyard. He worries about toxic gas, and then he purchases gas masks and puts them in the shelter. 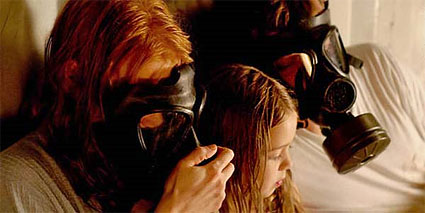 However, this does not give him any peace of his mind. Moreover, while his dreams move toward fears more personal than before, his behavior deteriorates relationships with others. As a close friend, his co-worker Dewart (Shea Whigham) willingly helps Curtis when he wants to use equipment from their construction company without permission--even though he can be fired along with Curtis for that. However, like Curtis' wife, he begins to sense something is wrong with his friend, and Curtis's paranoia puts a wedge into their friendship. That eventually leads him to the breaking point; Shannon delivers one hell of overwhelmingly rampant moment, which still shocked me during a second viewing.

Curtis' wife Samantha (Jessica Chastain), is in lots of frustration because of her husband's inexplicable behavior. She isn't mad about his trouble, but is angry because he puts their family into a financially precarious position without any discussion with her. The horror in Curtis' dreams may only exist in his head, but the horror of losing a job along with health insurance is terrifyingly real to his family as well as him. When I learned about how scary it is to lose a job in US through a book around 10 years ago, it only came to me as a mere fact of American life, but now it becomes more real to me through several recent movies including this film. 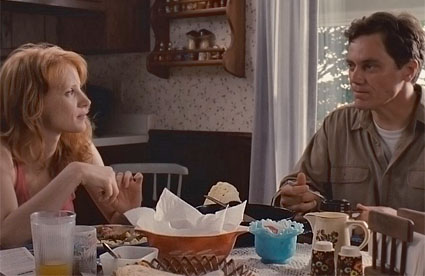 Jessica Chastain had a dazzling breakthrough last year with a bunch of stellar performances in the movies including "The Tree of Life" (2011) and "The Help" (2011), and, in "Take Shelter," she is the warm, understanding heart of the story, as she was in "The Tree of Life." Samantha feels hurt and angered because of her husband's recklessness, and she does not hide her resentment from her husband when she thinks enough is enough. Nevertheless, she decides to stay besides him for their uncertain and messy future, although her husband's mental disturbance now even casts a shadow of doubt over their relationship.

As a consequence, their mutual trust and love are put into an ultimate test after another frightful vision visits upon Curtis on one dark and stormy night. I will not describe what happens in details, but let's say the movie tightly focuses on Shannon and Chastain without giving any hint of what's going on outside; these two talented performers are superlative to watch in this suspenseful sequence which eventually elevates itself to one of the most moving moments I encountered recently.

Jeff Nichols previously impressed me a lot with his debut work, "Shotgun Stories" (2007), which was one of the small gems I came across in 2009. That movie was also a family drama both intimate and intense in many aspects. I instinctively realized what kind of a story it was and then was surprised by how it was told. I fondly remember how that movie carefully established the bleak sense of ill fate hovering over the wide field surrounding the characters, and Nichols does an excellent job of setting the right tone and atmosphere for the landscape of his second film. The outdoor scenes are mostly sunny and bright with the occasional shots of the wide field, but, beneath the mundane atmosphere, there is the tense, uneasy feeling you cannot easily put a finger on. We know something can suddenly happen at any moment. Is it possible that Curtis' dreams are not just delusions caused by mental illness?

While observing Curtis being driven to near madness, I recalled Akira Kurosawa's "I Live in Fear" (1955). In that film, so fearful of nuclear war, a middle-aged man tries to move his family to Brazil using all the money he has, and his family thinks he is crazy. As he is reminded belatedly, this is insane considering that a nuclear war would annihilate almost everyone on the earth, but the movie suggests that it may be also a little insane to live while not worrying about the potential of catastrophe like that.

I think that's how our mind works for us. We know we live with the uncertainty of the world and its inherent dangers. We worry about accidents and disasters when we hear about them from the media. Fortunately, they do not happen often, and our mind distances us from the reality a bit even while accepting, or forgetting, that anything can happen. We can say that poor Curtis suffers because the mental barrier which has buffered his mind from the reality is somehow ruptured.

The final scene of "Take Shelter" does not confirm my thoughts about Curtis' problem. As many of you know, this kind of story usually arrives at the possibility of whether the answer is, A, B, or somewhere between. The movie goes with the third option, which can frustrate some of us due to its ambiguity, but it certainly leaves us something to think and discuss about while slowly, and effectively, revealing its surprise to us. I am not so sure about what exactly happens or what it means, but all I can say is that, while musing on this scene, it comes to my mind that it has been a long time since I used that psychiatric term - folie à deux, or, more specifically, folie en famille in this case.