A man with inklings of a soul 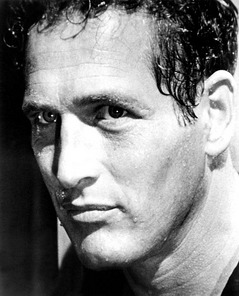 The 60s were a rough transition for America. Major shifts seemed to be occurring in every fabric of society from civil rights to sexual mores. The worsening course of the Vietnam war fueled distrust in political institutions. Women's rights highlighted a breaking from oppressive traditions. The old seemed to be fading away more radically than ever before.

Like the era it was made in, "Hud" was a key shift. As film critic Emmanuel Levy correctly puts it, it is "a transitional film between the naive films of the early 60s and the more cynical ones later in the decade." Though it plays as a compelling drama of small town life and family tribulation, through its lens of father-son conflict, it also captures the angst in the loss of authority, the gap between of two different generations, and an elegy for the good ole' days.

Based on the novel "Horseman, Pass By" written by that marvelous writer of the contemporary west Larry McMurtry (best known for "Lonesome Dove"), "Hud" chronicles the hardships of the O'Bannon family, headed by its elderly patriarch Homer (Melvyn Douglas). He owns a cattle ranch and runs it with the help of his son Hud (Paul Newman), and Hud's wide-eyed nephew Lonnie (Brandon De Wilde). While the O'Bannon boys run the ranch, their housekeeper Alma Brown (Patricia Neal) runs the household.

The film draws much of its power from its relationships, told mainly through Hud's exploits and conversations. A drunk and a womanizer, he can't help but switch from ranch hand to ladies man any chance he gets. Though he is weak with vice he possesses a certainty and a bravery that doesn't quite cross into foolishness. He's sly and not shy.

His father Homer is almost always on his case, and a model of calm unrelenting virtue, which might not be a virtue itself. He harbors a disappointment and bitterness in his son, which may seem apparent to Hud and to us, but goes deeper. Lonnie on the other hand is a true innocent who likes being with Hud because he's the closest thing to being a father figure and a big brother rolled up into one. 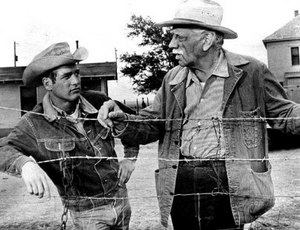 One day Homer finds one of his cattle dead, leaving both he and Hud puzzled as to the cause. Both find out soon enough that it is the worst thing that could happen to their way of life. It only brings out the ugliest in both their bitterness towards each other and ethical questions on how to cope with what is to come.

These doubts along with the animosity between father and son reflected the uncertainty of the times "Hud" existed in. Though the story seems to be set in the 50s with its careful attention to rural Americana, it only enhances an elegiac mood of a passing era, which Homer fully embodies. And as his soul seems to wither, his ranch transforms slowly and sadly in step, from buzzing to barren (pictured in gorgeous black and white by legendary cinematographer James Wong Howe). Melvyn Douglas plays him with a authentic dignity that is felt throughout his performance, regardless of how simplistic or vague his characterization is. Even with a simple sing-along moment, he finds away to bring out his heart. 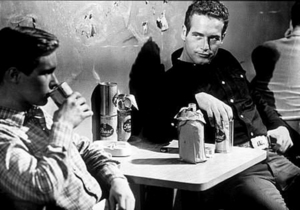 Though Homer might be the counterpoint which Hud plays against, but it's his relationship with Lonnie which helps us sympathize with him. Brandon De Wilde completely conveys a guilelessness which we can't help but reminisce on and care for. We relate to how he admires his grandfather, as it reflects our own hopes in acquiring the wisdom of our elders. But we also understand why he gravitates to Hud as he seeks a fellow exuberant spirit. When we see Hud take Lonnie under his wing, hesitantly revealing secrets, we understand him. Without Lonnie, Hud would be nothing but an ingrate.

Another one of the film's treasures is Alma Brown who arouses desire. Ideal in Lonnie, carnal in Hud. Played by the late Patricia Neal, she provided a refreshing change from the primped up cowboy beauties of the 50s (e.g. Angie Dickinson in "Rio Bravo") and provided a glimpse of the earthier female personas yet to come (e.g. Claudia Cardinale in "Once Upon a Time in the West"). But before or since, has there ever been a tougher or more memorable female character in a contemporary Western than Alma? She shows sensuality without trying to be sexy. She marks interest in Hud without revealing weakness, and her no-nonsense approach was ahead of its time. She more than held her own against Paul Newman, which only adds to her and the film's appeal. 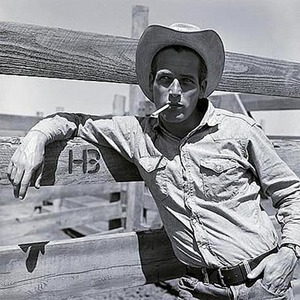 And of course we have the inimitable Paul Newman whose role here would cement his place in the Hollywood firmament (and supply him pretty much a dry run for his most famous role of "Cool Hand Luke"). It should be said the novel portrayed Hud as a man without merit. But here, with grace and gravitas, he supplies Hud with inklings of a soul. We understand why he went wrong, find an hint of where he may have gone wrong, and realize that inflexible nobility can produce its equivalent opposite.

Paul Newman was said to have been shocked that so many viewers felt for Hud O'Bannon instead of viewing him as a villain. Though many people see him as Alma rightly called him, "a cold-hearted bastard," he's more than that. "Hud" as a character of his time embodied a new ethos (right or wrong) longing to break free from old norms and seeking acceptance. As a film, it marked the entry of a new type of Western, one that was more intimate, more cynical, and more authentic than those before it.