A last shot at redemption

"The Godfather, Part III" is one of my favorite movies. I admit a personal obsession with the film that would have never existed had it simply been either good or bad. Some fans of the series clearly love to hate it; they equate Sofia Coppola's presence to that of Jar Jar Binks in the "Star Wars" trilogies, but I believe this is an over-simplification. "Part III" is an uneven picture that could and should have been great. That's what's maddening about it.

Few films in history have been as highly anticipated as "The Godfather, Part III." We had sixteen years to wonder whether Michael Corleone would ever awake from the catatonic state that his paranoia had immersed him in. Would Fredo's murder become the breaking point in his relationship with Connie? Could Tom Hagen's unquestionable loyalty be compromised? After the long wait, few of these pending topics were actually addressed; others seem to have been avoided on purpose. Even when the picture doesn't live up its predecessors, it features some of the best moments in the trilogy. Its biggest merit was bringing closure to the series with an outstanding ending. 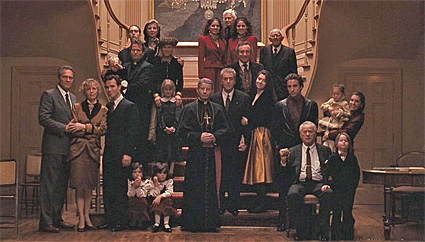 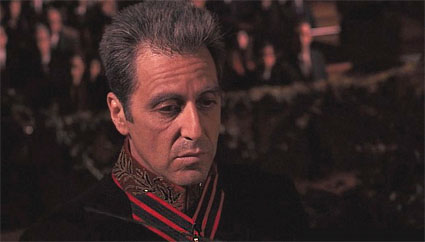 "The Godfather, Part III" represents Michael's last shot for redemption. His final opportunity to make good on the promises he broke so many times and to leave the business he once swore he'd never join. His love for his children is behind his effort to clean the family name and invest their fortune in a (seemingly) legitimate conglomerate; unfortunately, his new partners don't turn out to be all that different from those he came to know during his days of crime. Times have changed and his son Anthony (Franc D'Ambrosio) chooses a life in opera rather than sacrifice his dreams to help his father, as Michael once did. The latter Michael (Al Pacino) is aware of the need to resist any new calls to violence, but faith and circumstance "pull him back in." As he bestows his power on his bastard nephew Vincent Mancini (Andy Garcia), he's left with no choice but to relent on this stance, paying the dearest of prices in the process. 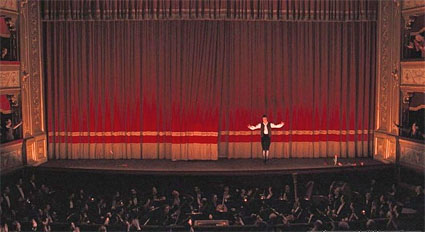 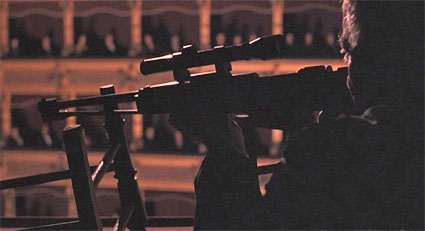 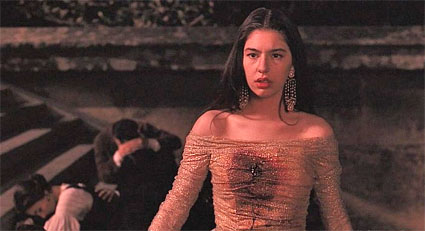 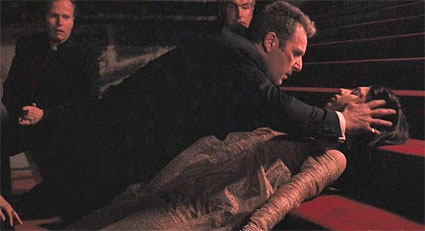 The main reason why the picture shares so much of the luster from its predecessors is that Coppola knows these people inside and out and he's as successful as ever in depicting their behaviors, celebrations and idiosyncrasies. The details that surround them always ring true and often imply something deeper about their natures. Think of the old Don declining help getting out of the car, as well as the sinister Archbishop's chain smoking habits. Several of the new protagonists like Vincent, Don Altobello (Eli Wallach) and the marvelously named Joey Zasa (Joe Mantegna) are just as memorable as those in the older films and so is the trademark screen violence--the sole exception to the latter being the murder of crime boss Lucchesi. Coppola could have chosen any other object for that deadly attack and they all would have made more sense than a stabbing with pair of eye glasses. 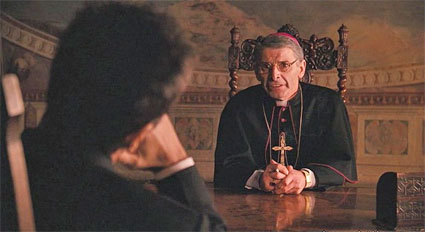 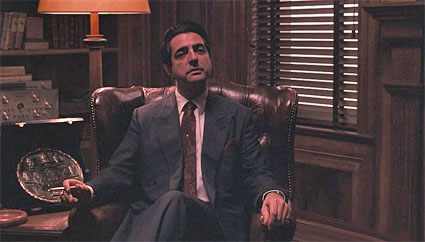 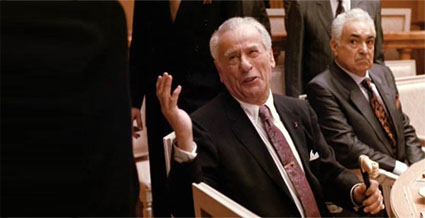 In this latest sequel we find ourselves in some of the same places and surrounded by most of the usual people, but the differences between Part III and the other "Godfather" pictures are tangible. The plot in earlier entries drove the story without giving too many explanations (a good portion of Part II was spent with the actors conveying emotions through silence). This latest Michael Corleone feels like a very different character, one that sounds as if he took therapy and was ordered to share his feelings with anybody willing to listen. Pacino has to carry most of the film by himself and he spends a considerable amount of time explaining his motives. Perhaps he had no choice since the absence of Tom Hagen leaves him without the counterpart that could have helped him reflect on his thoughts without having to go into deep explanations.

The end result is that Michael loses much of his aura and mystery. The Kay character serves this purpose early on but eventually becomes a decorative item of little use; their reconciliation feels forced and leads to nothing relevant. It would have been better to start the movie by killing her character and make this the main motivation for Michael's transformation. The concept of her funeral sounds like a better introductory event than the awarding of some medal--and besides, the previous scene (from II) with the kitchen door slamming in her face would have become all the more powerful (and a great flashback to resort by the director). 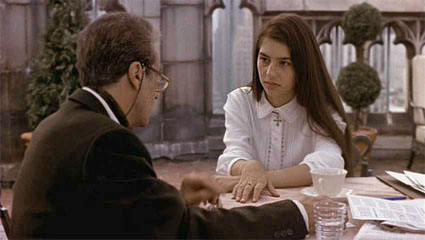 Much has been said about the casting of Coppola's daughter Sofia as Mary. I don't really think she's as terrible as some people have said. The real problem is the size of the burden she's asked to carry. This character had to convince us that her ambitious cousin would have good reasons to give up on someone like Bridget Fonda and risk everything only to go after her. Sofia's mission was basically to make the audience fall in love with Mary. There's no question that even a more experienced actress like Winona Ryder would have had her work cut out for her. The "Godfather" films are populated with larger than life characters, and this Mary just doesn't seem to belong in the same world of Sollozo, Mama Corleone, Fanucci, Luca Brasi and the like. There's a very simple scene early on the picture that shows her toasting with a glass of champagne and we can easily sense how keenly aware she is of the camera (as any non-professional would be). Her love scenes with Garcia are especially awkward and it doesn't help us to realize that her father is watching from behind the camera. Francis's love for his child is evident and this surely helped him come up with such a heartfelt story but it seems to me that some of his priorities lead to decisions that differed from what we had come to expect in these films. 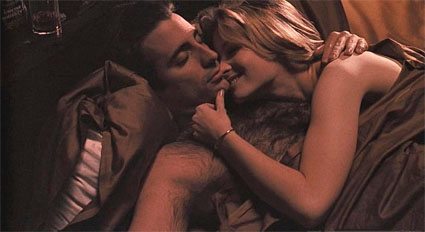 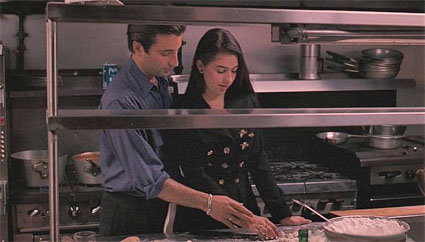 "The Godfather, Part III" has other believability problems. I know next to nothing about opera, but it seems unlikely to me that anyone would jump from amateur singer to major star in the period of just a few weeks, regardless of having the right sponsor (think Susan Alexander Kane in "Citizen Kane"). It's also hard to believe that Michael would be totally oblivious to the fact that his son Anthony (Franc D'Ambrosio) had such a gift to begin with and that he would be so concerned about his son's career choices. Let's face it, when a man is constantly shown giving away hundreds of millions of dollars to charity, he shouldn't be lecturing his son on the dire consequences of leaving law school and taking up professional singing? Perhaps the kid will end up doing all right either way.

"The Godfather, Part III" has two segments that just as compelling as any in the series. First off there is the wonderful confession scene. By now we've grown accustomed to the nature of Michael's crimes and only the look of horror from an outsider (his confessor) can remind us of their severity. Once he repents, it feels like a load has come off our own shoulders as well. The impact of the scene is slightly lessened by Michael's new, talkative nature that's already had him blurt out many of his regrets but this is a very powerful sequence nonetheless. The same applies to the opera sequence that's beautifully crafted and includes many intriguing allegories between the happening on and off stage. The key to Coppola being able to generate such a level of suspense comes from the continuing affection and concern his characters are able to bring forth in us.

Part III is one of those movies in which everything comes together for an explosive (yet heartfelt) ending, or as Coppola describes it, the "nightmare of nightmares." This is clearly a picture that could have never been made by someone who hadn't experienced love and loss intensely. As heart-breaking as it was realize the irony that everything Michael went through was for naught, it was also heart-warming to appreciate that this film (and the trilogy as a whole) received just the right conclusion, one that is almost in the same level with those from the prior entries. Coppola's first intended to call it "The Death of Michael Corleone" but he was rebutted by studio executives. It's hard to blame them. As much as audiences dreaded the man's sins, we always wanted him to come on top and this title would have meant entering the theater with an awareness of a seemingly undesired outcome.

It is no secret that "The Godfather, Part III" was rushed by studio executives to meet a certain deadline and there are certain parts where this is more than evident. The director mostly blames himself for the movie's under-performance at the box office as he consciously restrained Michael's reactions involving violence and revenge, two of the elements that audiences most expected. Coppola does seem satisfied with the end result. The presence of his family and his identification with the main character makes it one of his most personal films. At the end, nothing doomed its chances of becoming an equal to its predecessors like the absence of Robert Duvall who refused to appear over a salary dispute in what surely became one of the casting losses of all time (his pivotal character was perhaps my very favorite in the series). As we say here in Mexico, "in the sin was the penitence": studio honchos' focus on immediate profits likely killed the future financial possibilities of this series and in the process left me forever wondering what could and should have been of this picture.