A Bold Pleasure: On Park Chan-wook's "The Handmaiden"

The story is set in Korea during the 1930s, when the country was in the middle of the Japanese Occupation era. The opening scene introduces to us Ok-ja (Kim Tae-ri), and we see this poor urban girl leaving a Dickensian place where she has lived with others since she was very young. She is about to be sent to a big manor located somewhere outside the city, where she will work as the new handmaiden for Lady Hideko (Kim Min-hee).

As a car carrying Ok-ja enters the manor, we cannot help but be impressed by not only its vastness but also the boldly eclectic style of the mansion. With its baroque juxtaposition of British and Japanese architectures, this big, imposing mansion grips our attention right from its first appearance on the screen, and so does the library outside the mansion, whose interior design also shows the similar parallel of the Western and Eastern styles.

The owner of the manor is known well for his enormous personal collection of books and artworks, and we learn later that he often has Lady Hideko recite some of those books in front of a group of invited guests. His official name is Kouzuki (Cho Jin-woong), but this wealthy middle-aged guy is in fact a Korean man who got naturalized as a Japanese citizen via his marriage to some Japanese noble woman, who killed herself not long after her young orphaned niece was brought to Kouzuki’s manor. That young girl was Lady Hideko, and now Kouzuki is going to marry her mainly for further solidifying his social/financial status. After all, he wants to collect more for his library, and he will definitely need more than his current wealth.

Right after Ok-ja arrives at the mansion, the stern female butler of the mansion, who is as forbidding as Mrs. Danvers in “Rebecca” (1940), tells her about how she should behave and serve Lady Hideko’s personal handmaiden, but, and this is not much of a spoiler, Ok-ja already knows what kind of job she is going to do there. In contrast to her seemingly mousy appearance on the outside, she is actually a street-smart crook who has worked for a small criminal organization in the city. Her real name is Sook-hee, and her real purpose is helping the nasty scheme of her partner-in-crime, who already presents himself as a Japanese count to Kouzuki and Lady Hideko in advance.

As the plot thickens, we learn more about their plan. While “Count Fujiwara” (Ha Jung-woo) ingratiates himself with Kouzuki as assisting Kouzuki’s swindle involved with his collections, he is also going to try to win Lady Hideko’s heart, and Sook-hee will smoothen this process as someone whom this lonely, isolated lady can trust and lean on. Once he gets the money through his marriage with Lady Hideko, there will be a dire consequence for Lady Hideko, but Sook-hee is fine with that because she will get her own share of money in the end.

However, Sook-hee also finds herself unexpectedly attracted to Lady Hideko, who initially seems to be aloof but then reveals more benign and alluring sides to Sook-hee as they spend more time together. The more Sook-hee and Count Fujiwara advance in their plan on Lady Hideko, the more Sook-hee feels closer to her mistress, and that naturally creates considerable strain in the partnership between her and her accomplice. Can he rely on her as before? Can she really trust him? And can she keep her disguise as usual despite her growing feeling toward her mistress? 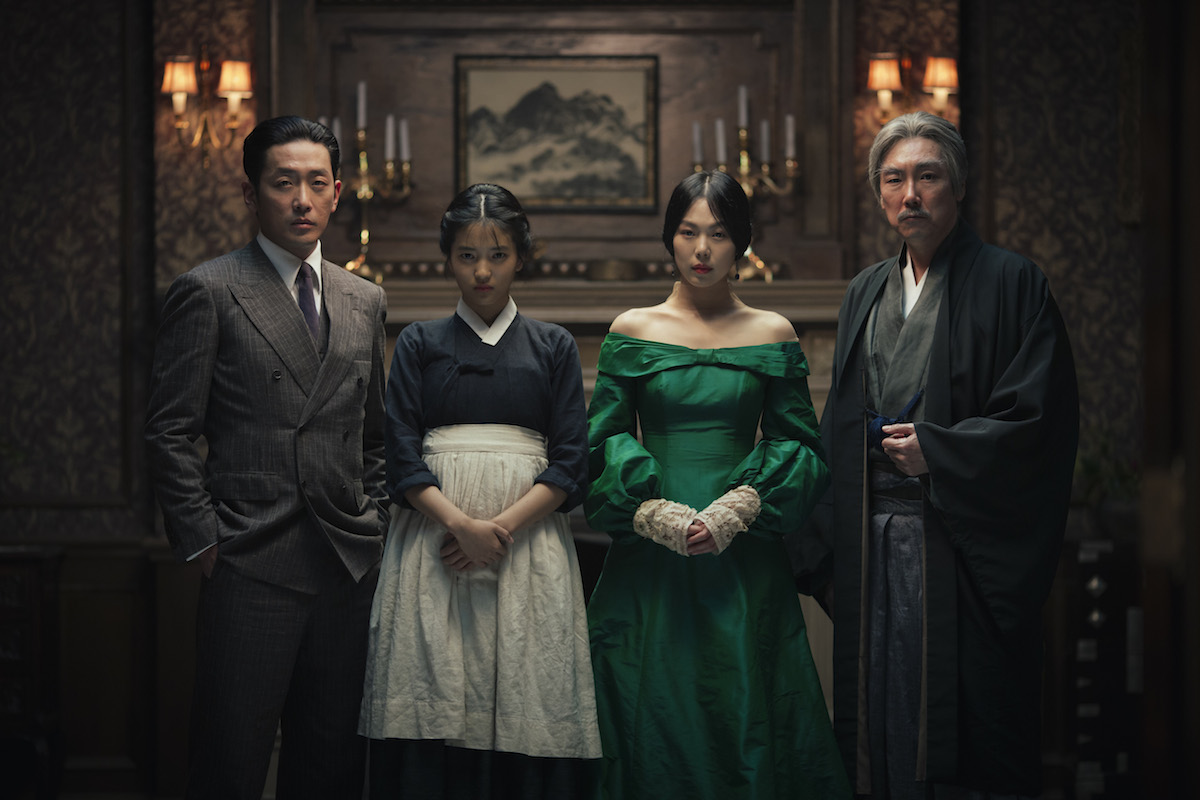 The movie is based on Sarah Waters’ acclaimed novel Fingersmith, whose story is set in the 19th century England during the Victorian era. I do not know how much the novel is different from the movie except their apparent background difference, but I can tell you instead that the adapted screenplay by the director Park Chan-wook and his co-adapter Jeong Seo-kyeong is often deviously entertaining—especially when a number of crucial elements during the first act are rearranged along with other elements to reveal more twists and turns during the second act. As the main characters in the film turn out to be more untrustworthy than expected, we come to observe them from the distance, but the movie maintains its dark sense of fun and thrill, and we are entertained by its twisty plot progress.

Above all, Park does an impeccable job of establishing his own edgy, stylish atmosphere. While the costume design by Jo Sang-gyeong is gorgeous to say the least, the production design by Ryu Seong-hee, who received the Vulcan Prize for the Technical Artist after the movie was shown at the Cannes Film Festival in last year, is dazzlingly beautiful. It creates a visually bountiful world to be inhabited by characters, and it is really a shame that the movie was not nominated for Best Production Design Oscar early in this year. The cinematography by Chung Chung-hoon is deft and confident in its handling of lighting and scene composition, and I like how it constantly suggests something dark and sinister behind the slick, luxurious texture of sets and costumes.

While the movie is indubitably a big breakthrough for newcomer actress Kim Tae-ri, Kim Min-hee, who delighted me with her fine performances in Hong Sang-Soo’s “Right Now, Wrong Then” (2015) and “On the Beach at Night Alone” (2016), is equally compelling and beautiful as effectively complementing her co-star on the screen. The movie is often surprisingly funny as these two lovely actresses push and pull each other behind their back, and their fearless performances work as the strong basis for a couple of steamy moments of nudity which, to our amusement, turn out to have more things to be undressed later.

In case of two other main performers, Ha Jung-woo is alternatively dapper and caddish as required, and Cho Jin-woong, who previously appeared along with Ha in “Nameless Gangster” (2012), is loathsome as a vile man with unspeakable perversions to nurse in his secret dungeon. The movie does not miss the absurd irony observed from these two rotten men trying to deceive each other through each own fake Japanese identity, but it is disappointing that “The Handmaiden” does not go further during their certain scene which may take you back to one of the infamous moments in “Oldboy” (2003). Kim Hae-sook, who gave a scene-stealing supporting performance in “Thirst” (2009), holds her own small place as a butler who may be as sadistic as a man she serves for, and Moon So-ri briefly appears as Kouzuki’s ill-fated wife.

“The Handmaiden” is not entirely without problems. I still think its last act could be tighter and neater through cutting a few scenes, and I am not so sure about whether the finale works as well as intended. Nevertheless, I admire the movie for being a bold pleasure packaged with style and wit, and I appreciated its solid performances and top-notch technical details as tickled a lot by its wry naughtiness. Overall, this is another compelling work from one of the most fascinating filmmakers in South Korea.

1. Interestingly, the Korean title of the movie is “아가씨” (Ah-ga-ssi), which means “miss” or “young lady.”

"The Handmaiden" will be screening this Thursday night at 8:30 at Ebertfest in Champaign, IL. For more information, click here.