The Ebert Club is pleased to share this classic film noir, streaming free. I invite you to join the Club and dive into an eclectic assortment of wonderful and curious finds. Your subscription helps support the Newsletter, the Far-Flung Correspondents and the On-Demanders on my site. - RE
"This movie from Hollywood's poverty row, shot in six days, filled with technical errors and ham-handed narrative, starring a man who can only pout and a woman who can only sneer, should have faded from sight soon after it was released in 1945. And yet it lives on, haunting and creepy, an embodiment of the guilty soul of film noir. No one who has seen it has easily forgotten it." - From my Great Movies review 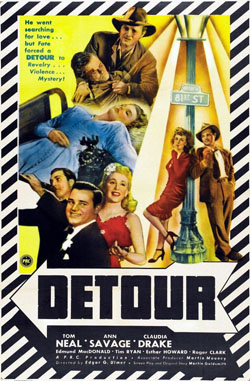 Detour (1945) Directed by Edgar G. Ulmer. Written by Martin Goldsmith and Martin Mooney. Starring Tom Neal, Ann Savage, Claudia Drake, Edmund MacDonald and Tim Ryan.
Synopsis: Al is a piano player who sets off hitchhiking his way to California to be with his fiancee. Along the way a convertible driven by Charles Haskell Jr. stops to pick him up. Al is driving while Haskell sleeps when a rainstorm begins and Al pulls over to put up the top. Haskell doesn't wake up and falls out onto the pavement, dead. Al dumps the body, takes Haskell's money, clothes and ID, then drives off in Haskell's car. In voice-over, Al tells the audience that he didn't kill Haskell. After spending the night in a motel, Al picks up another hitchhiker. As it happens, Vera had earlier ridden with Haskell and blackmails Al by threatening to turn him in for murder unless he gives her the money. Note: At the age of 86, Ann Savage was cast by director Guy Maddin to play a shrewish mother in the film My Winnipeg (2007).

For more treasures, go here to join the Club.

Next Article: ♫ Deck us all with Boston Charlie, Walla Walla, Wash., and Kalamazoo! ♫ Previous Article: Jean Shepherd reads his original "A Christmas Story"