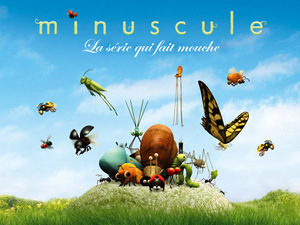 Recently I reprinted a letter sent to my friend Christy Lemire, film critic of the Associated Press. In it, a great-grandmother described how she took four generations of her family, including herself, to see "The Nutcracker in 3D." They all responded, quite naturally, as if they had found coal in their stockings. It was a shocking film to promote in the guise of family entertainment. What does the Holocaust have to do with The Nutcracker Suite?Marie Haws, the good-hearted Hon. Sec'y. of the Ebert Club, was so moved by the letter that she proposed we make the following special page and fill it with these wonderful Minuscule clips and share them with readers, in the hope they raise spirits and spread smiles this Christmas season -- for those disappointed kids, and everyone. Season's screenings!

Minuscule is a French series of 5 minute shorts created and directed by Hélène Giraud and Thomas Szabo. Described as "a cross between Tex Avery and Microcosmos," each features one or more insect characters in a self-contained and often humorous storyline.

Next Article: At this point, we all need a good laugh Previous Article: The ukulele orchestra of Great Britain