War of the Arrows: Deadly targets

"War of the Arrows" is currently available on Netflix Instant, Vudu, iTunes and Blu-ray/DVD.

A sudden crush of movies is bringing the sport of archery back into the limelight, and the timing couldn't be better for the 2011 costume drama "War of the Arrows" from South Korea. This is like a Western movie damsel in distress scenario transported to 17th century Korea with archery instead of gun sharpshooting. The good guys don't wear white hats, but you'll easily be able to tell the good guys from the bad guys in this morality tale. 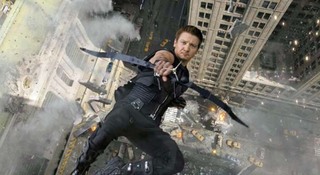 European tradition has William Tell and Robin Hood to tantalize young boys into archery. In America, if children still play cowboys and injuns, then one supposes that the Native Americans still use bows, but that's usually just the braves according to old stereotypes that places the squaws in the wigwams. More recently, we've had "The Avengers" with Clinton Barton's Hawkeye.

For girls, "The Hunger Games" have given us an alternative reality with arrow-slinging Katniss who like Annie Oakley learned to shoot in order to feed her family. Disney's newest princess, Merida in "Brave," performs archery on horseback. Has there ever been a better time for archery?

For South Koreans, archery isn't just about the past, but also about the present and the future. South Korea has an intimidating legacy at the Summer Olympic Games. Archery was an original sport of the Olympics, only to be discontinued in 1920. It returned to the Games during the tragic Munich, Germany, Games in 1972. Since then, South Korea has earned 30 medals, 16 of those were gold. The U. S. has only 13 medals, eight of which are gold. The South Korean women have won the team gold every year since 1988 (The men have earned team gold for the last three Summer Olympic Games). 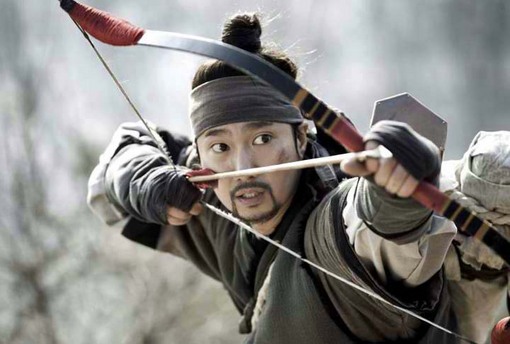 With that legacy in mind, archery isn't reserved for Korean men. In "War of the Arrows," the main male characters and the one main female character are skilled archers. The movie is set during the Second Manchu invasion of Korea. If the only Manchu you know about is Fu Manchu, here's a little historical background. 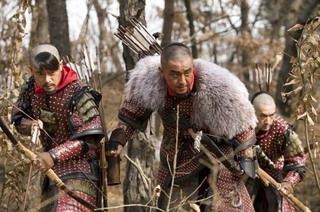 First, Fu Manchu is a fictional character unless we're talking about the California stoner rock band. The Manchu are also known as Tartars or the red-tasseled Mongols. The Manchu established the Qing Dynasty and their emperors married women descended from the Mongol Great Khans. Kublai Khan, the grandson of Genghis Khan who founded the Mongol Empire, ruled from 1260-1294 and founded the Yuan Dynasty in 1271. The Yuan Dynasty ended in 1368 and the Qing Dynasty began in 1644 (The Ming Dynasty filled in the gap in between). The Qing Dynasty was the last dynasty before nationalism (Republic of China from 1912-1949) and the communism takeover of mainland China. 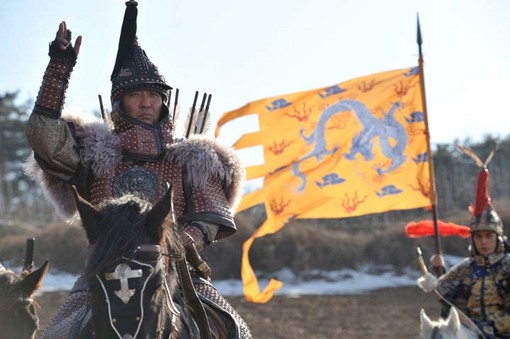 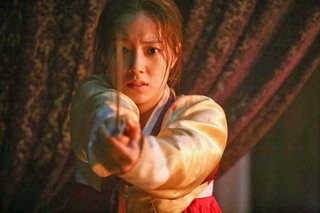 Huang Taiji's half-brother Dorgon, who would eventually rule through his nephew, is the heavy in "War of the Arrows." The movie actually begins with a father Choi Pyeong-ryung (Yoon Dong-hwan) fighting off King Injo's soldiers at his spacious upscale compound. Loyal to King Gwanghaegun, Pyueong-ryung is considered a traitor as Gwanghaegun had been forced to abdicate in 1623 and was in exile at Jeju Island. Under attack by soldiers and dogs, Pyeong-ryung sends his son Nam-yi (Park Hae-il) and daughter Ja-in to his old friend Kim Min-soon as he stays behind. Though his sister begs him to stay and help their father, Nam-yi having been charged with her safety, forces her to leave, looking back just in time to see his father beheaded.

There will be more bloodshed along the way, but not until 13 years later, in 1636. Min-soon's son, Seo-goon (Kim Mu-yeol) has fallen in love with Ja-in and they are to be married. Nam-yi, although a skilled archer like his father, feels there is no future for the son of a traitor and lives out in the forest. Although he gives Ja-in his approval, he doesn't even bother to stay for the duration his sister's wedding to Seo-goon, a rare comedic interlude. 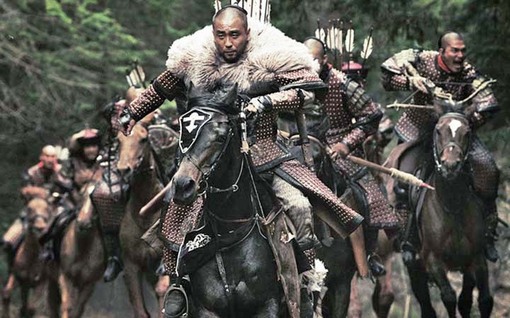 Nam-yi just happens to be in the hills hunting when the noise of Prince Dorgon's great mounted army moving quickly into Korea alerts him. But he's on foot and can't return to the village in time to warn the wedding party and must fight off the Qing warriors that he meets. When he finally arrives at the village, Min-soon is dead and his sister and brother-in-law have been abducted into slavery. 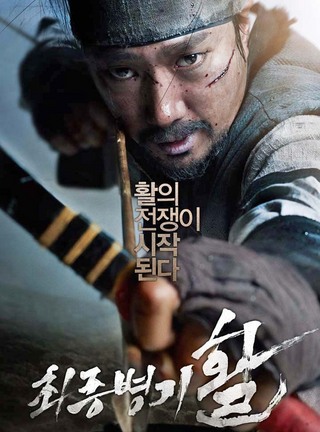 Nam-yi finally finds his mission in life, not unlike John Wayne in "The Searchers." The captives are forced to walk through the mountains away from their homeland and not all survive. Seo-goon and Ja-in are separated. Nam-yi follows, picking off soldiers along the way with red arrows.

If Seo-goon comes off as a bit of a fop and callow youth, the movie is also about his becoming a warrior worthy of Ja-in. While he's never quite on the wrong side of the war, like Hawkeye in "The Avengers," he does experience an awakening of sorts. He's inspired to heroism by an ordinary person, believing if just one prisoner should escape that would be worth risking death. He incites the captives to rebel against the Manchu and he escapes. Eventually he joins Nam-yi. 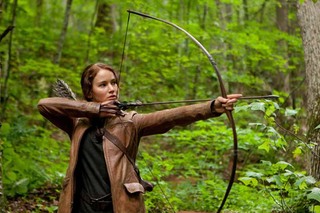 Ja-in's group is with Dorgon and one by one, women are taken to Dorgon's tent to entertain him until at last Ja-in is chosen. Although Ja-in's chastity is threatened by the leering Dorgon, she is reprieved by Dorgon's need to be wanted. Dorgon prolongs his subjugation of Ja-in using hunger instead of force. Now, that wasn't successful in "The Hunger Games" with archer Katniss and it isn't here either. Luckily, Ja-in and her virtue are rescued as her husband and brother swoop in just in time. Nam-yi kills Dorgon and escapes, but Dorgon's right-hand man, Jyuushinta (Ryoo Seung-ryong) then pursues them.

The character development here isn't particularly subtle and veers into melodrama with more emphasis on actions and reactions of the bloody sort. Contrasting the smirking Dorgon and some of the more brutal soldiers, the older Jyuushinta seems to feel the full weight of his comrades' deaths and doesn't take pleasure in the torture and fear his troops inspire. 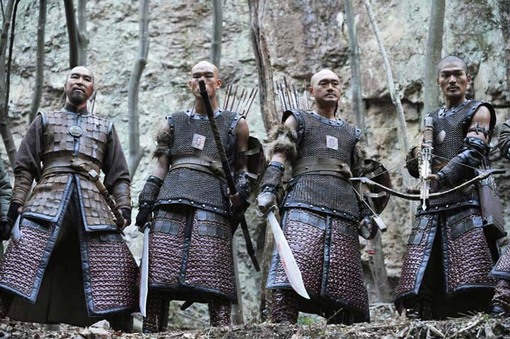 My knowledge of archery is limited to my brother's small practice bow that we used to "kill" large empty cardboard boxes on our front lawn. Yet the movie tells us that Korean bows are shorter and thinner. You'll also see a curious feature that is called a tong-ah, or arrow guide that Nam-yi stops to make. I won't debate about whether this is more effective or if Katniss and Merida should be using it, but it was a part of traditional Korean archery.

Director/writer Kim Han-min uses shaky cam judiciously to suggest panic and the disorienting speed of the battle, but while there's blood, this isn't a gore fest. The deadly sharpshooting is the focus of the film. You might complain that there are one or two magic arrows but none of them as comically improbable as Mel Brooks' "Robin Hood: Men in Tights" and no apples are shot off of heads or in the mouths of pigs. There moments when very little suggests a lot as when we see the trembling tea in a cup showing the rumble of the approaching Manchu army before the movie characters can hear it. 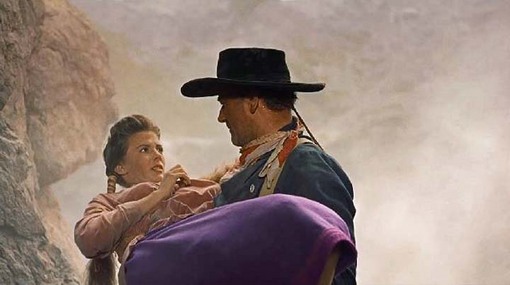 John Ford's 1956 "The Searchers" is, oddly enough, less prudish and more psychologically deep in its treatment of women's "honor." In that movie, John Wayne's character Ethan seeks his niece Debbie (Natalie Wood) who has been abducted by Comanches but she becomes the wife of one of her captors, something the Ethan can't abide. He'd rather see her dead. The tricky question of a woman's "virtue" that the Ford movie examined to a certain extent, is avoided "War of the Arrows" even though women besides Ja-in were compelled to entertain Dorgon.

Like Ethan, Nam-yi feels he is an outsider. Labeled a traitor, Nam-yi cannot have a family because they would have no future under the current Korean king and the attitude of the filmmakers is clear: "The king who abandoned his people is himself a great sinner." In the Ford movie, Ethan fought in the Civil War for the Confederacy, but Abraham Lincoln isn't criticized and Ethan's disassociation with the domestic society of home and hearth is also caused by his rigid hatred and prejudice against the Native Americans. 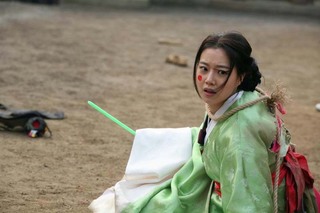 While Katniss and Merida don't need a man to save them, Ja-in, though spunky, must depend upon her husband and her brother to rescue her. In this respect, "War of the Arrows" harks back to the older tradition of American filmmaking, the damsel in distress. In those dramas, the villain had to be punished and in "War of the Arrows," Dorgon is apparently killed, but the historical Manchu prince by that name lived until the end of 1650 and ruled through his nephew as regent. He had several primary spouses including a Korean Joseon Dynasty princess and a Korean lady as his secondary spouse.

There's also a plot device involving a tiger that seems out of place, even if you consider that the tiger is the symbol for South Korea today. With other details, director Kim Han-min was more careful. He required the actors portraying Manchurian characters to learn the dead language, something that might be lost on those of us who do not comprehend Korean (Hangul) and wouldn't be able to tell the difference between Manchu and Korean. 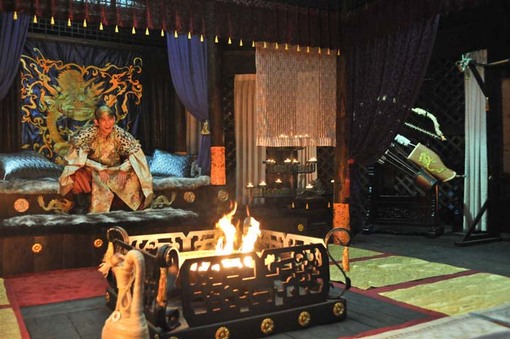 Kim Tae-sung and Park Jong-chul's cinematography fills the screen with saturated bright colors during the scenes of luxury or recreation, but this costume drama contrasts that with the tattered grunge of the refugees and rebels who live in subdued colors as the search drags on.

For real bow action, the 2012 Summer Olympics archery events are scheduled for July 27 to August 3.