With exquisite grace, the Sugar Plum Fairy twirled for what felt like an eternity during a performance of “The Nutcracker” at the Woodstock Opera House. I was a little boy at the time, and yet I can still recall with painful vividness the loud thwack that resonated through the theater when the ballerina’s hand smashed against a piece of set decoration, eliciting an audible gasp from the audience. What amazed me was how she remained entirely resilient, not allowing a single trace of agony to flicker across her face. After all, the show must go on.

The art of ballet has proven to be a subject of fascination for me ever since, and it’s easy to see why so many filmmakers are attracted to exploring it as well. Such meticulous discipline is required to make every strenuous step of choreographed movement appear effortless. Paying the price for maintaining a superhuman fantasy can have inherently destructive repercussions, a fact that has fueled many memorable screen tragedies. The most sublime example of all is Michael Powell and Emeric Pressburger’s 1948 masterpiece, “The Red Shoes,” an exhilarating ode to the art form that captured the thrill of its heroine’s obsessive pursuit for perfection. When asked why she wants to dance, she asks back, “What do you want to live?” Her questioner fumbles for an answer: “Well I don’t know exactly why, er, but I must,” to which she replies, “That’s my answer too.”

That sort of boundless passion is conspicuously missing from Moira Walley-Beckett’s dreary new STARZ series, “Flesh and Bone,” about a competitive ballet company in New York City. Very little effort is made during the first few episodes to place the viewer within the physical experience of the dancers. There’s some fine dancing on fragmented display, yet the camera is more preoccupied with the reactions of onlookers observing and judging every move. As depicted here, ballet appears to be an entirely joyless act, stripped of all artistic purpose or personal conviction. It’s merely the backdrop for a familiar coming-of-age yarn about a virginal, wide-eyed lass struggling to find herself in a city chockfull of opportunistic predators. Robert Altman’s 2003 gem, “The Company,” illustrated the potential of an episodic excursion through the backstage lives of ballet performers, yet “Flesh and Bone” unfortunately owes a whole lot more to the melodramatic clichés of Darren Aronofsky’s “Black Swan.” 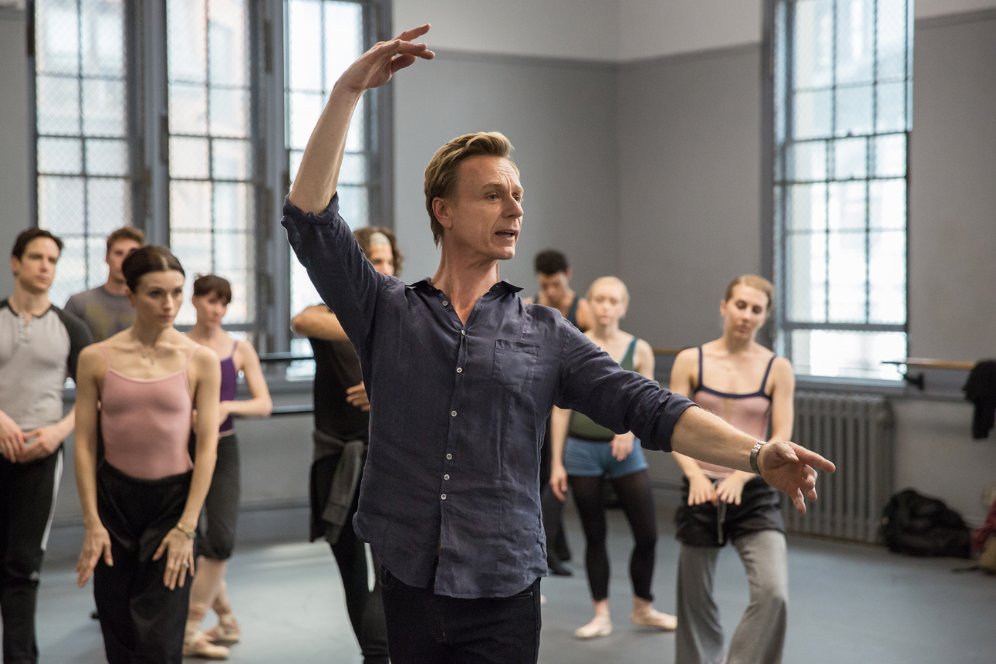 The chief strength of the show lies in its central performance by Sarah Hay—fittingly glimpsed among the background dancers in “Black Swan”—as Claire, a 21-year-old dancing prodigy who flees from the clutches of her abusive brother (Josh Helman) and heads to the Big Apple. Not only does she acquire membership in a prestigious company run by the snarling Paul (Ben Daniels, cartoonishly over-the-top), she lands the lead role in an all-new production created for her allegedly star-making abilities. This instantly makes Claire the target of arsenic-tinged jealousy from her peers, most of whom seem hellbent on trying to out-bitch each other in the spiky retort department. The great Marylouise Burke turns up in a thankless supporting role just long enough to deliver my favorite line of the series thus far, as she gazes at the glut of famished, bad-tempered ballerinas and utters, “You all look the same to me, and you could all use a ham sandwich.” I also took great pleasure in a sequence during the third episode, where a new choreographer forces the dancers to hug one another, calling to mind the Twyla Tharp-inspired warm-ups I performed back in my high school drama club.

Warmth is just about the last word one could apply to Paul, an egocentric monster with a moral code borrowed from Zidler in “Moulin Rouge!” His working relationship with Claire lacks the carnal tension that existed between Vincent Cassel and Natalie Portman in “Black Swan,” since his character is flamboyantly gay from the get-go, yet his methods of manipulation are every bit as violating. He urges Claire to discover her inner power, though simultaneously removes her power by affirming his ownership of her very identity. The show’s plentiful nudity is predictably aimed at STARZ audiences eager for gratuitous soft-core spectacle on the order of “Spartacus,” yet there is nothing remotely erotic about the second episode’s climactic scene where Claire is reduced to a sexual object at the hands a wealthy sleazeball, the primary source of the company’s funds. Just as Satine was ordered to sleep with the Duke, Claire is instructed to ensure the man’s satisfaction, though she improvises a method of escape that is rather ingenious in its simplicity. The only sequence that registers as truly sexy occurs on the pilot, as Claire becomes mesmerized by the striptease of a fellow dancer (Raychel Diane Weiner) at a club. Will these hints of attraction blossom into a full-on romance, or will it go the way of Portman and Mila Kunis’s fantasized fling in “Black Swan”?

Regardless, Hay’s credibly vulnerable and authentic work earns our empathy from frame one, and turns out to be the only thing keeping the viewer’s attention hooked. She’s unquestionably the lead in the series’ first episode, directed by David Michôd (“Animal Kingdom”), yet as the show continues, it develops into more of an ensemble piece, chronicling the private moments of characters that initially were placed on the fringes. We learn more about the aging ballerina (Irina Dvorovenko) straining to reclaim her place in the spotlight while battling drug addiction (she’s as much of a mess as Winona Ryder in “Black Swan”), the friendly homeless man (Damon Herriman) with a penchant for wisdom and poetry, Claire’s hideously vengeful roommate (Mia Bialy) and even Paul’s Mel Cooley-esque punching bag (Tina Benko). The expanded scope of the narrative should’ve made things more interesting, but it’s hard to care about people who are as stereotypical as they are unpleasant. A moment that may serve as a deal-breaker for many viewers emerges in episode three, when Paul hurls a nest of baby birds out the window after their chirping interrupts his latest self-indulgent monologue. Couldn’t Paul have just moved to another part of the cavernous room rather than stand directly in front of the open window where the nest was precariously perched? Of course he could, but where’s the contrived drama in that?