The original Italian title of Mario Bava’s 1964 “Blood and Black Lace” is “Sei donne per l’assassino,” that is, “Six Women For The Murderer.” It’s certainly not the first work in cinema and literature to concern itself with the serial murder of women, but the upfront nature of the title and then, of course, of the film’s actual content suggests a border crossing of sorts. Not only did Bava’s film help codify the exploitation genre referred to by buffs as “giallo,” it also influenced John Carpenter’s “Halloween” and by extension a host of body-count and final-girl horror movies, not to mention the ostensibly convention-overturning pastiches and travesties that were the “Scream” movies (soon to be an MTV series, I learned recently, unless it’s come and gone already).

It’s generally a given that the sexual politics of such movies are either hopelessly retrograde or, in some individual cases, overturned to such extremes as to be transmuted into something radical. In any case, the spectacle of beautiful women meeting death in grisly ways has only a very few meanings behind it, none of them wholesome. Watching “Blood and Black Lace” in a gorgeous, eye-popping restoration now on Blu-ray disc courtesy of the Arrow label, the visual quality of the film often overwhelms all other considerations. Bava was a master of in-camera illusions, dazzling lighting effects, and color, and he orchestrates his sequences of death like a stage magician walking through an especially elaborate trick. The victims of the murders, all associates of a fashion house, are all women, and all beautiful, and many of them are in effect killed twice, first drained of life by an impassive, trenchcoat-clad, faceless killer, then mutilated and laid out for display and discovery by a surviving friend and associate. 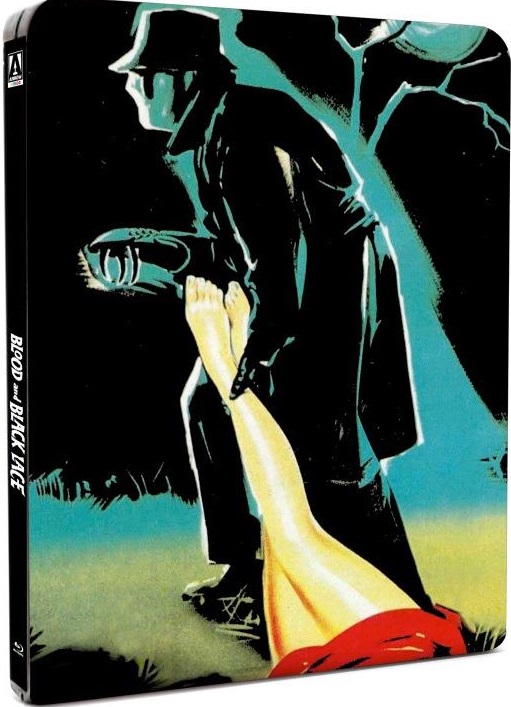 For all that Bava’s poetic morbidity attempts to do an end run around the idea of misogyny, rather than face up to it. The murders are investigated, of course, and people say things like “We’re dealing with a mad man here,” and “Or a homicidal sex maniac” despite the fact that the victims have not been sexually brutalized. It’s hardly a surprise that by the end it’s revealed that the murders have greed as the motive, that the killers are wholly “rational” actors trying to throw attention away from a money-grabbing scheme by wiping out actors who pose a threat via an invented lunatic straw-person.

With such banal whys and wherefores, the film’s murder scenes act as Rorschach tests for the viewer, albeit one especially crafted for the male gaze: how close together do you like your Eros and Thanatos? With Hitchcock, the sexual obsession, particularly as expressed in “Vertigo,” is that of absolute possession, from beyond and leading back to the grave. For Bava, who frequently populates his murder scenes with simulations of the human form (body-fitting torture instruments in “Black Sunday,” model mannequins in “Blood And Black Lace” and even more so in the later “Lisa And The Devil”) the preoccupations are with beauty and its desecration, either by nature (old age and rot) or violence. These concerns don’t transcend politics/ideology, but they stem from a long tradition in Western art that doesn’t necessarily warrant being written off as merely misogynist. This is not to suggest that a contemporary viewer of the movie ought to be gleefully guilt-free, or unmindful of the film’s implications. But the spell it means to cast is rooted in concerns so old it’s easy to mistake them as almost elemental. Nevertheless, for all its visual beauty, Bava’s baroque vision here doesn’t display any will to subversion. He’s here an inspired, maybe genius, craftsman who’s content to draw within the old lines. But it’s interesting to look at the range of variation that exists within what a lot of people are willing to lump within the same exploitation cinema parameters. In the next part of this consideration, I’ll look at the Blu-ray release of an adaptation of an old horror trope that’s a truly off-kilter radical imagining.