The Darker Shades of Human Nature: Lifetime's "And Then There Were None"

Nothing sends a dinner party downhill faster than an accusation of murder. So imagine the chaos that erupts when a disembodied voice—thundering from everywhere and nowhere at once—lays out not one but ten charges of unlawful, unpunished killing. Mystery fans will recognize this as the opening of Agatha Christie’s "And Then There Were None," the bestselling mystery novel of all time, but the entire setup—ten strangers lured to a isolated spot (an island off the stormy Devon coast, in this case)—could be the start of a teen slasher movie, a sophisticated horror movie, or a futuristic thriller.

Almost before the terrified, defensive guests can stammer that how they’re all completely innocent, someone drops dead at the dinner table. A drug overdose or something more suspicious? (The victim was a coked-up playboy.) The guests, including a judge (Charles Dance), a WWI general (Sam Neill), a wealthy do-gooder (Miranda Richardson), and two creeping servants (Noah Taylor and Anna Maxwell Martin) trade tales of misleading invitations from their elusive hosts, a millionaire couple whom no one has ever met.

In this superior adaptation of Agatha Christie's novel, yet another top-drawer collaboration between the BBC and A&E/Lifetime, the real secret host is Christie herself—a master of suspense and a keen expert on the darker shades of human nature. Though her novels are usually described as “cozy”—indeed, most of the Golden Age crime fiction is labeled thus for its lack of gore and violence—there’s a great deal of brutality in her work. Victims die horribly of poison, sometimes in front of their loved ones, and murderers are motivated by savage emotions: jealousy, greed, a general callousness toward others. Confessions, when they come, can be as vicious as the killings themselves. In her last works, killers lack any semblance of morality or guilt.

"And Then There Were None," set in 1939, when the whole world seemed to be on the edge of apocalyptic war, reflects that changing morality. And so does the TV screenplay adaptation by Sarah Phelps. Though the screenwriter retains the class-distinctive diction of the book, she infuses the new version with a modern sensibility. The story’s most compelling character is Lombard (Aiden Turner), an adventurer/gun-for-hire who immediately owns up to the charge of murder: Yes, he says, he did kill an entire village of African natives (the novel says that Lombard did so out of self-preservation, to steal food and supplies for his expedition, but the film’s flashback implies that he did so as a Colonial usurper—he had weapons, he conquered.) But when confronted by Miranda Richardson’s nasty, scripture-quoting charity worker, he sneers that religion—her religion—is as big a killer in Africa as the gun. With assured direction by Craig Vivieros, the two part miniseries rattles along like an on-time train. One by one, those figurines disappear, but the ending still comes as a surprise. That’s how sly some of the performances are.

It’s Miss Claythorne, the schoolteacher (Maeve Dermody), who fairly jumps at the sight of the dining table’s strange centerpiece: a ten-set of green, weirdly phallic figurines. (Ominously, there’s a giant hook—not for a hanging plant—in the center of her guest room). Lombard is the first to notice something’s not quite right with Miss. Though she’s the only guest to demonstrate any kindness toward others—offering to help the overburdened servants, helping a the infirm judge up the stairs—she overreacts when Lombard eyes—okay, leers at—her long legs, briefly, before their journey to the island. “You seem to believe I am a certain kind of woman,” says Miss Claythorne. “You are mistaken.” 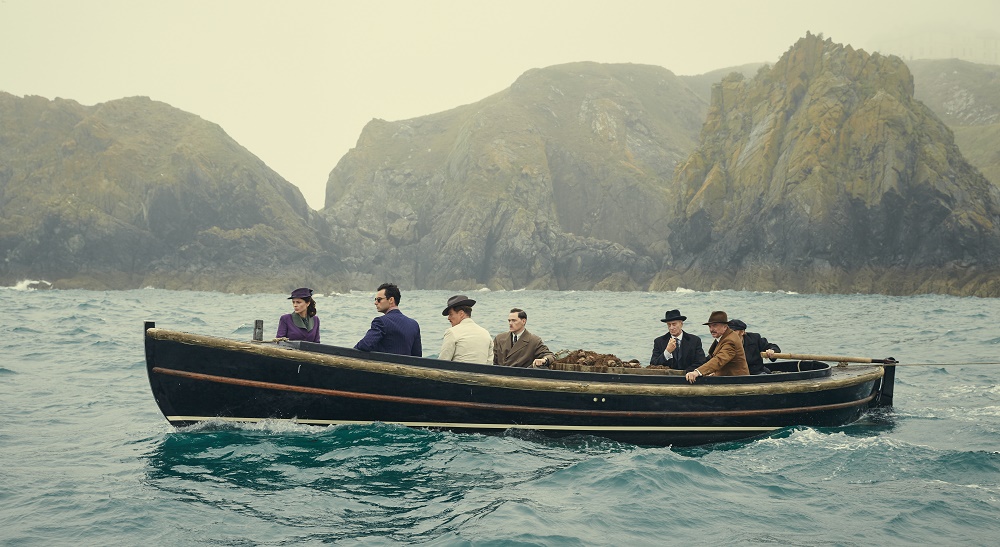 As played by Aiden Turner, Lombard is a Tex Avery wolf in wolf’s clothing. Or lack of clothing. This is the same guy that the BBC managed to disrobe and send ocean-swimming in "Poldark" (PBS’ Masterpiece). A star is born, half-nakedly.

Lombard and Miss Claythorne circle each other, hungrily, but soon someone else is dead. A suicide, possibly—but what’s the connection between the deaths and the childish rhyme pinned up in their rooms? (“Ten Little Soldiers,” changed from the racial slur-doggerel in the original novel). As someone dies, a figurine disappears … and no guest will admit to doing it. Soon rifts and alliances form between the guests. More unsettling, their protestations of innocence ring false—at least to the audience, for the guests’ crimes, or sins of omission, become nastily clear in flashbacks. The retired cop (Burn Gorman) makes a show of being a hero, though his past includes the beating death of an innocent gay man in custody. The boozy surgeon (Toby Stephens of "Black Sails," a standout) attempts to make a scientific inquiry into the deaths, though his area of expertise is “hysteria” and “women’s afflictions." His reaction to the death of one of the servants is a model of British understatement: “She’s been dead for hours. I would inform the others not to expect much in the way of breakfast in the circumstances.”

When the numbers dwindle, the victim-perpetrators’ reactions change from fear to suspicion to resignation and even joy. In a bizarrely comic scene, a few of them dig into the cokehead’s stash and get crazy high while blasting the phonograph record accusing them of murder. “How do you plead?” the voice booms. “Guilty!” they shout, before pairing off on the dance floor. Lombard, whispering in Miss Claythorne’s ear, promises to protect her from harm, but the comforts of love—or just apocalypse sex—can’t last.

Perhaps it’s the military man who best expresses the mood of "And Then There Were None." When one character is quick to excuse the murders done by some fellow guests—the general, the judge, the detective—by saying they must have been committed in the line of duty, Sam Neill’s retired general disagrees. Alone by the shore, he ponders his past crime and the war to come. “The military man senses the stillness before battle,” he says sadly. “And he accepts it.” Why do audiences so adore a grim tale like "And Then There Were None"? There is, in the end, no one to like. Perhaps it’s because we recognize, in the characters here, in their hardness, their coldness, their denials and unkindness, the little murders we do every day.