Slapstick last: Why a Modern-Day Harold Lloyd is Unthinkable

There are no great physical comedians any more.

This isn’t to say that physical presence isn’t a part of today’s comedy: it is. It’s impossible, for instance, to think of Louis C.K.’s humor without imagining his bear-like girth along with it. It’s difficult to think of laughing at Kristen Wiig without also thinking of her tiny frame (and of the wild gesticulations she is capable of). And Melissa McCarthy’s body is as much a part of her humor as her mouth or her mind. But this isn’t really the same as making your body do funny things, an art neglected of late. We have our Steve Martins and Jim Carreys, but they and other comedians of their type tend to follow a trajectory that leads them away from their slapstick roots, toward more subdued romantic comedy, even realistic drama. Pure physical comedy once ruled the roost. If you want proof of this, you can find no better example of it than the work of Harold Lloyd, whose 1923 classic Safety Last! was released last week on DVD and Blu-Ray by Criterion. 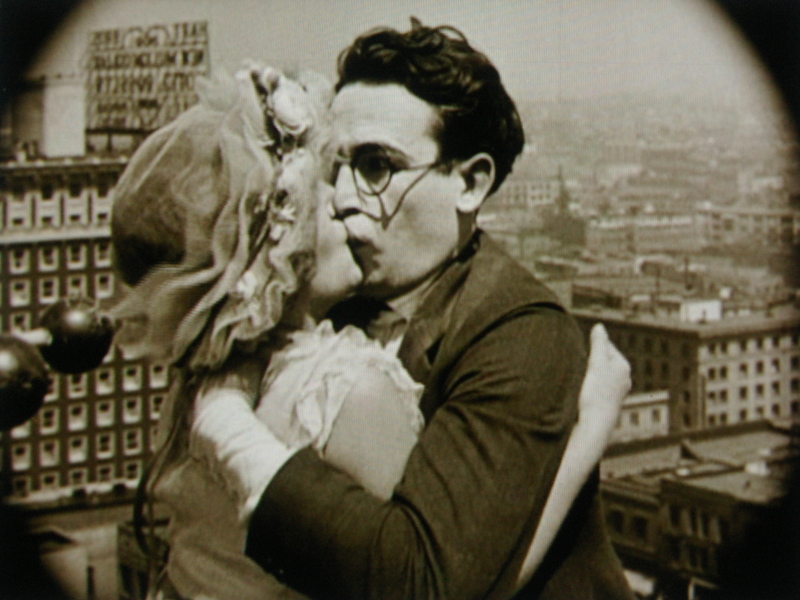 The kind of laughing you do during this film, and in fact the laughing you do during most comic films of the silent era, is more pure and often more whole-hearted than the kind of laughing you might do during contemporary comedies. This is because there’s nothing between you and the laugh. Lloyd does a physical stunt, a prank, or a funny face, and you laugh at it: it’s that simple. The humor here is free of pop culture references, or irony, or any of the other triggers we have come to accept as “funny.” It’s almost as if you’re laughing with another part of your brain. It doesn’t hurt that the story of this film is as wild and complicated and zany as one of Lloyd’s leg-swings: Lloyd is a small town Nevada boy who has moved to the big city, where he works a miserable job as a cashier on the first floor of a department store. His wife is back home, waiting to be sent for; when she shows up unexpectedly, he has to immediately transform himself into the high-ranking employee he has deemed himself in his letters home. He devises a scheme: he’ll get an agile friend to scale the side of the building where he works, drawing attention to the company and garnering him a huge reward, along with, we think, a promotion. Through a mishap, Lloyd himself becomes the climber: danger ensues! All ends well, with a healthy dose of Lloyd’s trademark physical wackiness.

Throughout, the physicality and the straining of his lower body bring him closer to Keaton or Chaplin, while his upper body is that of someone else altogether. In the film’s most famed scene, his ascent up the side of the office building, his face and his body seem to be working at cross purposes. His swinging legs and arms seem to be telling you to laugh, while his face reminds you just enough of what your own expression might be in such a situation to make you… well… scared. 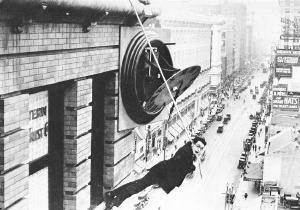 It would be hard to choose a favorite funny/scary moment: is it the scene where, near the end of his climb, his pals pull him up on a rope, repeatedly banging his head on a ledge above him? Is it the scene where he gets tangled up in a net, tossed down at him by an unseen hand? Or is it the scene where he gyrates around on a high precipice with a mouse in his trouser leg? (It couldn’t be the scene where he dangles from a drooping clock face, clinging to one of its hands, because that scene is too symbolic and immortal to be merely funny or merely scary, or even a combination of both.) It’s hard to pick a favorite because the stunts and obstacles are rolled out so spontaneously; the real progression here might be that of the viewer, who sees more and more of himself as Lloyd climbs farther and farther away from solid ground.
Advertisement

Of the many incidentals packed into this highly completest edition of the film, the one that offers the most—apart from three pleasingly light previously unreleased shorts, a well-researched book by Ed Park, a positive and affirming commentary by Leonard Maltin, a short documentary about the ways Lloyd’s special effects team took advantage of Los Angeles’s geography to create the illusion of height, and an interview with Carl Davis, the composer of the film’s sprightly, bouncy soundtrack—is a two-part documentary called The Third Genius. Most revelatory here is the artistic sag that took place when Lloyd added sound to his films. When his high, intelligent sounding voice barges into a story, it’s as if someone added an unnecessary oboe to a symphony, ruining the composition. Notwithstanding one very funny scene in which Lloyd stuffs a donkey into the back of a cab and lip-syncs its brays, hearing his voice spoils the magic, as if the value in the silent films was all we weren’t hearing, all we were projecting onto his face and body.

So, letting alone our need for sound in films (a fair enough need, easily fulfilled), what’s happened to physical comedy? Can its popularity leading up to the 1970s or 1980s be dismissed as “ a product of a simpler time,” as we might say about silent films, inaccurate as that statement might be about the times described, or the films? Or could it be something more subtle: that, as a society, we’ve lost the desire to stimulate the part of the brain pratfalls talk to, that we would not, in this day and age, find anything funny about Chevy Chase’s stumbles as Gerald Ford on the old Saturday Night Live? Or Tim Conway’s inching steps as Mr. Tudballon The Carol Burnett Show? Is it that we’re getting smarter? Or is it that we’re gradually deciding we don’t need the pleasure of a stumble or the sight of a person accidentally being whacked with a board, that we’ve moved on, that if it isn’t “meta” it isn’t of interest?

The value of watching a film like Safety Last! Is that it raises these questions, and doesn’t allow us to answer them too quickly. Safety last, indeed.

Max Winter is a poet and critic, and the editor-in-chief of the IndieWire blog Press Play. He has published reviews in The Boston Globe, The San Francisco Chronicle,Time Out New York, Bookforum, and other publications. His first book of poems, The Pictures, was published by Tarpaulin Sky Press. He co-edits the press Solid Objects, and he is a Poetry Editor of Fence.