No Escape From L.A.: “BoJack Horseman” Channels Joan Didion In Its Fourth Season

Since it first aired in 2014, Netflix’s “BoJack Horseman” has masterfully combined humor with heart. The story of a washed-up horse actor, voiced by Will Arnett, who lives in a surreal alternate world where people and human-like animals live side-by-side, has been heralded for its unflinching look at celebrity culture, ambition, art and mental illness. The characters struggle to navigate how to be happy in a world that is often shallow or cruel. At a time when outrage is normalized in our culture, but sadness is still seen as useless and self-destructive, “BoJack Horseman”’s insistence on finding meaning in grief has effectively captured the cultural zeitgeist of the late 2010s.

This fourth season is no different, as we learn more about the inner lives, desires, hopes, fears and dreams of characters we have grown to know and love. In one of many moving storylines this season, Princess Carolyn goes to the jewelry store to get the clasp to her favorite necklace fixed. She tells the jeweler that the necklace was a family heirloom from the “old country” but when she comes to pick it up, the jeweler informs her that the piece is, in reality, worthless: it is just another piece of costume jewelry.

“Somebody just told you a story,” the jeweler says, “I’m sorry.”

In the next scene, we see a distraught Princess Carolyn cry privately in her car. Throughout the series, Princess Carolyn is portrayed as a fierce go-getter, someone who is not only able to lift herself up, but who dedicates a tremendous amount of her life to lifting up others: from convincing actors to pursue a compelling script, to talking BoJack down from one of his ridiculous drunken binges. In season one, we watched Princess Carolyn give herself a similar kind of pep talk, urging herself to not let her emotions get the best of her and be little more than a machine. In season four, we see a brokenhearted, but perhaps wiser, Princess Carolyn come to terms with her own disappointment. 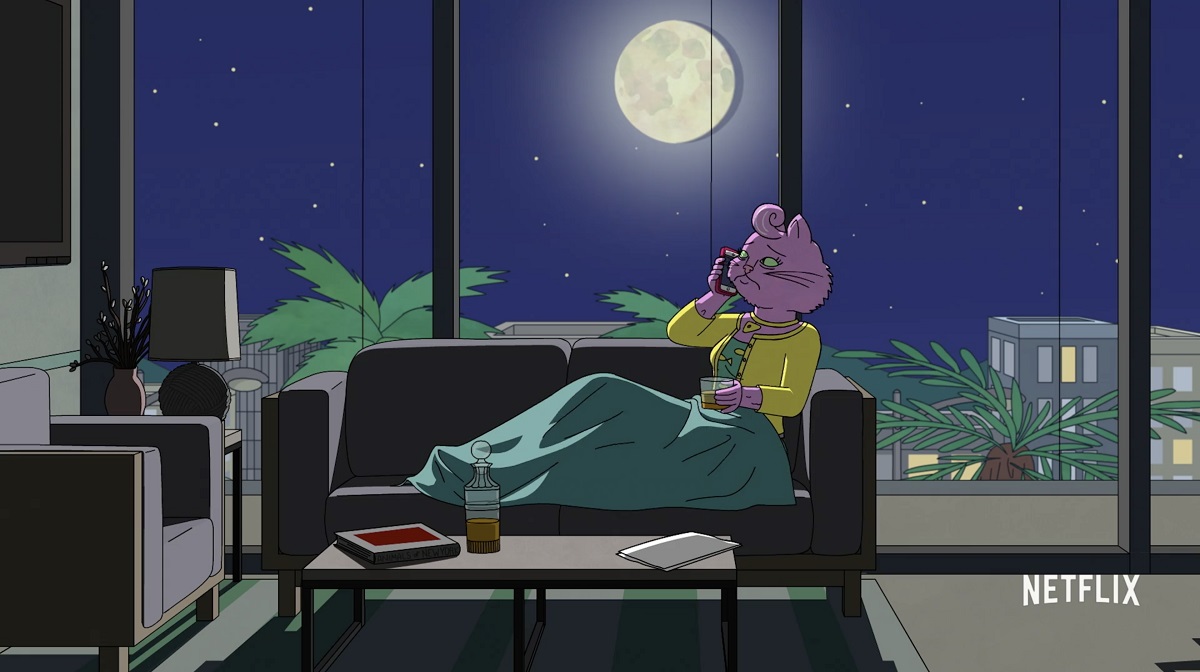 “BoJack Horseman” has always been a show that is self-aware about its lineage: a season three poster features a close-up of BoJack looking squarely into the camera with the words “Soprano, Draper, Underwood, Horseman” over his head. But in addition to these antihero influences, the series is also a clear articulation of Joan Didion’s vision of California: from her obsession with looking at the hopes and follies of the American Dream to the quintessentially American fantasy of escape and starting over that renders California both alluring and devastating. Didion famously opens her book The White Album with the line, “We tell ourselves stories in order to live,” and season four of “BoJack” unpacks what it means when our fantasies don’t measure up with our very real experiences.

The theme of storytelling as a kind of construct is in most obvious and comical display in Mr. Peanutbutter’s run for governor, where he challenges the incredibly qualified Woodchuck Couldchuck Berkowitz, the long-standing governor, who suddenly finds himself having to compete in various likability contests in order to win his well-deserved vote. Though Mr. Peanutbutter’s enthusiasm is infectious, this season also showcases the absurd ways that society values personality over substance, and highlights the mounting differences between Diane and Mr. Peanutbutter, two characters who have always seemed to be a strange pairing. Throughout the season, Diane’s frustration with Mr. Peanutbutter is shown to be an ideological one. While, in earlier seasons, Diane was charmed by her husband’s playful supportiveness, this season has her questioning PB’s judgment, as well as values, and while their verbal sparring at times leads to some voracious sexy times, at others it is very clear at Diane wonders if their entire marriage is a sham: a story they told themselves that doesn’t actually hold up.

The most ambitious exploration of how the stories we tell ourselves shape our understanding of the world delves into the heart of BoJack’s childhood trauma. For the past three seasons, we’ve seen how BoJack’s mother Beatrice was both emotionally abusive and painfully neglectful. And yet, season four focuses on Beatrice’s story, and how her foundational experiences, heartaches, traumas, and disappointments, ended up shaping her relationship to her own son. This slow building plot line is deeply affecting: BoJack’s own childhood trauma has been a standby throughout the series, as we’ve seen little BoJack’s attempts to reach out to both of his parents, each time getting rather cruelly rebuffed. And we have gotten many hints at how his mother’s constant lack of approval shaped the way that BoJack sees himself and the world around him. The show walks a tremendously difficult line—encouraging us to empathize with Beatrice Horseman, while still holding her accountable for her cruelty to her son, and showing how trauma can pass from generation to generation. 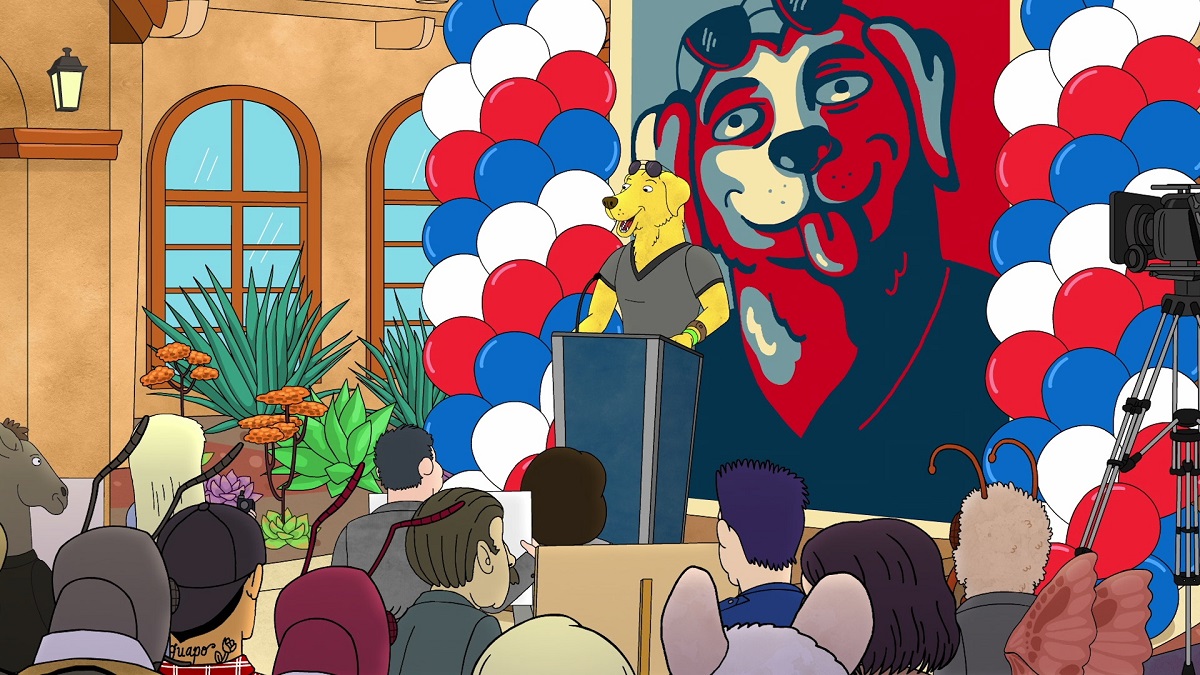 The heart of “BoJack Horseman," and what makes it easily the best series of the 2010s, is its insistence in not only finding meaning in pain, but in also creating something tender and beautiful out of it. Many people seem to act surprised in seeing a cartoon traverse the wildly complex terrain of what it means to be human, but, the truth is, animated tales have long presented sadness as something that is worthy of investigation—from “Peanuts” cartoons that focus on Charlie Brown’s deep alienation, to early episodes of “The Simpsons” that consider the joys and struggles of being a family, to the zany, existential antics of “Rick and Morty,” which forces viewers to confront a potentially meaningless universe where there are so many possible realities that none of them actually really matter.

And yet, what distinguishes “BoJack Horseman” from other animated masterpieces is its earnestness. The joke in so many cartoons is that the characters are perpetually stuck—forced to wear the same clothes; to repeat the same catch phrases and jokes; to remind the viewer that whatever kooky adventure happens, they will remain pretty much unchanged. Season four of “BoJack Horseman” challenges viewers to see BoJack and his friends not as unchanging stock characters (like the characters in BoJack’s stale-yet-beloved ‘90s sitcom “Horsin’ Around”), but as people (and horses and cats and dogs) capable of transformation, of making choices, of getting worse, and, maybe, just maybe, also getting better.

In the final moments of season one, BoJack desperately wants Diane to tell him that he is good person, and she refuses, arguing instead that she doesn’t think that people are good or bad. “I kind of think that all you are is just the things that you do.” The joy of “BoJack Horseman” comes not simply from its clever visual gags, and sense of whimsy, but in its humane portrayal of a world where stories might not be able to save us from sadness, death, alcoholism, drug addiction, or regret. Instead, stories can help us push through, move forward, and do the work of growing, changing, and being kind.